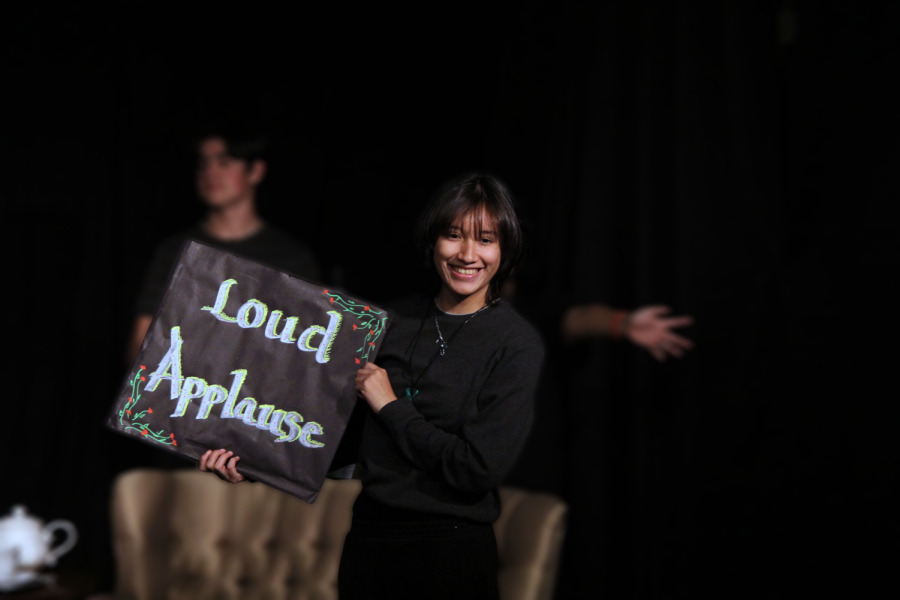 Emily Mendez holding the cue card telling the audience to cheer for the actors on stage.

The theater show, “Curse You, Jack Dalton!” was one of the best plays I’ve seen in a while. The acting and interaction with the audience were the cherries on top and it felt as if I was a character in the show, rather than someone who was just watching.

I did feel as if some audience interaction was missing, like there should’ve been more “Boos”, “Awes” and “Hoorays” than we heard. The crew used cue cards to signify audience reactions at certain times and I feel that they could’ve used them for key moments as well. For example, I believe that in each part when Bertha came in, she’d have her own “Awe” to signify her “cuteness” in the character or when Richard and Bertha had finally seen each other after being away from each other for so long, I believe they could’ve used an “Awe” along with the music in the back.

The stage setting and costume designs were simply great, I loved how basic the villains were portrayed in black eerie costumes, but it set them apart from the others as a way of telling you they were the ones who were bad. Egbert Van Horn and Anna Alvarado both had personal motivations as villains, doing it for equally bad reasons showing the lengths that the villains are willing to go to in order to get what they want. Anna Alvarado was there to show that she was desperate to gain the riches of the Daltons and to gain Jack’s love for her. Egbert Van Horn only began to marry into Daltons for money as well, just to run off with it. They both share an odd opposite emotion towards Bertha, the common maid who had won over Jack’s heart fairly. The stories of each character are out of order and bizarre but it connects them all in a way that makes it so dear, which is why this high school theatre melodrama was one of the best I’ve seen in a long while.

The acting was just great and the improv was too. I had gone to see both shows in two days and some of the saves made by the actors were so incredible that none of the audience even knew about it until after the show when the actors were discussing it around with the crowds or their family. In all honesty and in a simple summarized message, this play is definitely something I would recommend to those who love interacting, comedy, and suspense.