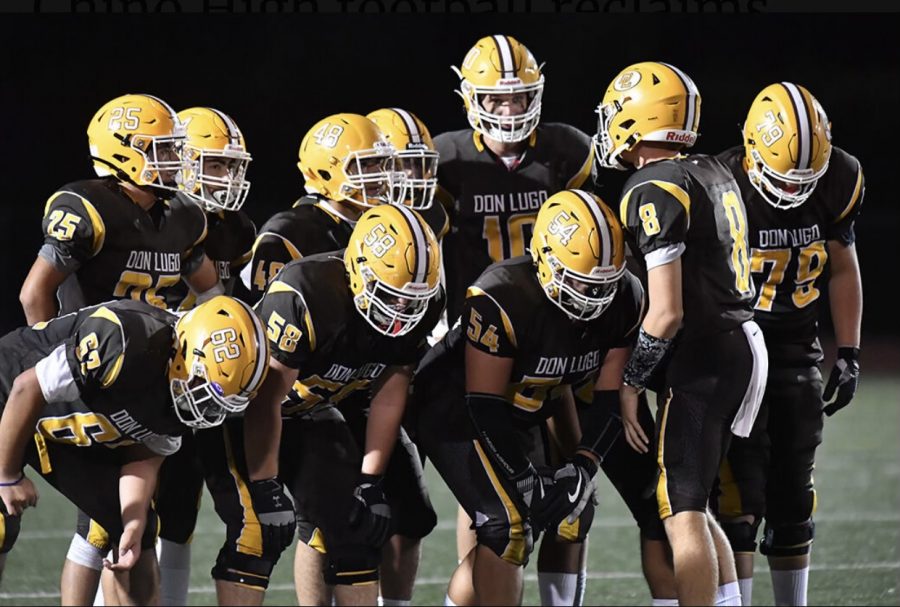 Dylan Young is calling a play to the offense. “Practices having been feeling a lot better after winning a game because we know what works now and what doesn’t,” said Anthony Randazzo.

Football’s big win and how it benefits the future

You may or may not know but last Friday, October 8, Don Lugo Football picked up their first win of the season. They faced South Hills at the Covina District field and played very well after going through many tough losses. With League coming soon and the team trying to make the playoffs, this could just give the boost the football team needs.

“That win last week did give us a lot more confidence for league and especially this upcoming week for the homecoming game against,” said Junior Anthony Randazzo, who is a three-year varsity player. Boosting players’ confidence leads to better success and we know the playoffs are very easily accessible. In Lugo’s division, the overall record is 8-20, and they see a league championship still attainable.

“I feel way more confident after beating South Hills and I believe that our win uplifts our team spirits because it shows that we can win and we can play well. This gives us the momentum into league we need and has uplifted many of our players too because it shows them that if we all do our job, then we can have outcomes like we had with South Hills,” said Junior and 3-year varsity starter, Kevin Garzanelli.

One of the main problems that Lugo Football was having was their offense, and how they are going to drive the ball down the field. With many of the starters from last year gone, and many underclassmen having to step up to the plate, they are finally feeling more confident and less nervous when playing because of the experience that they now have under their belt. Lugo has fixed their offensive problem by passing the ball more often, and running the ball less. This has seemed to work with many of the starting receivers having 100 yards or more in the last game.