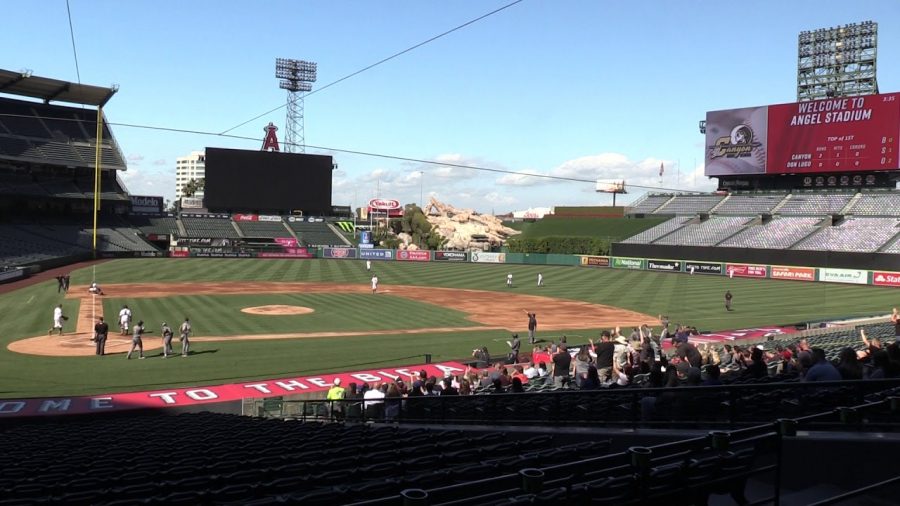 During the epidemic of the ongoing coronavirus, the much anticipated annual baseball game at Angels stadium in Anaheim has been cancelled for the Don Lugo baseball team. The game was scheduled for March 22 of this year which had people very excited. Players had begun fundraising and advertising the game prior to schools and sports being shut down.

The team started playing at Angels stadium for one game a year since the 2018-2019 season. Although, the game at Angels stadium was relatively a new deal to the baseball team, it was also big deal, as it represents the new season and a glimpse of what the new year holds. Last year the Don Lugo team won at Angels stadium, which was one of their most memorable moments of the year last season.

Players were in disbelief as the news spread about the game being cancelled. JT Cortinas, who is shortstop for the Don Lugo Baseball team, states,”I’m sad about it, especially for our seniors who had waited the whole year to get to this season. Angel stadium is the coolest experience we’ve had, and now that it’s taken away from us. We can’t enjoy it together as family.”

Family, students, and friends would have attended the game as they would have the whole stadium to themselves. Now with the concern of personal health, people will not be able to enjoy this privilege.

Jojo Galindo, who is outfielder for the Don Lugo baseball team, states, “It’s very depressing. We look forward to this game all year long and for it to get cancelled, it just sucks.”

In the meantime, the Don Lugo baseball team will have to look forward ‘til next year to play at Angels stadium in hopes the corona virus won’t be a problem in the future.