The Celebration of Life: remembering Kobe and Gianna Bryant 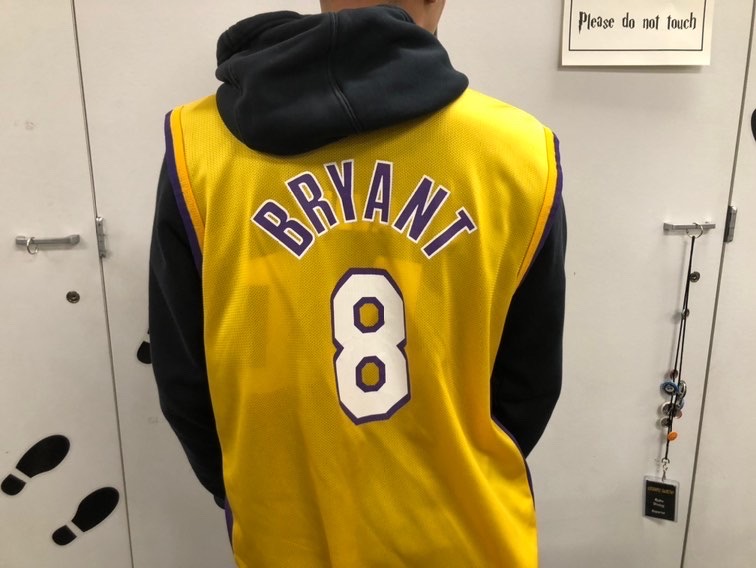 Cade Silvas among so many other Don Lugo students was heavily impacted by Kobe’s passing, stating, “He’s the reason I play basketball.”

Monday February 24, Kobe fans lined up outside The Staples Center in a sea of purple and gold to celebrate the lives of Kobe and Gianna Bryant. The cameras faded into the ‘house that Kobe built’ at the start of The Celebration of Life, and immediately panned to the purple spotlight on both of Kobe’s retired numbers; 24 and 8. The jumbotron illuminated with the names of all nine people lost on January 29, and the side of The Staples Center was covered in Kobe’s image with #ThankYouKobe underneath it.

Beyonce opened the celebration of life with a heart-touching performance. Before beginning, she encouraged the crowd to sing so loud that Kobe could hear it from heaven. Her smile was wide as she sang “XO” Kobe’s favorite song, with a chorus dressed in white behind her. She than performed an emotional “Halo” that jerked tears in every viewer, whether they were fortunate enough to be in the audience or if they were viewing from home.  As she closed out the song, she added a line for Kobe and Gigi, “Halo don’t fade away.”

They then cut into a montage of all of Kobe’s career defining highlights — from his draft at 18 to his infamous retirement speech, to him holding his daughters. The camera cut to Vanessa Bryant, crying but with a smile on her face as she watched the moments that made Kobe, the Black Mamba. As the montage came to an end, and the screen faded to black with Kobe’s voice being the only sound in the building as he said,”Mamba Out”

Jimmy Kimmel then walked onto the red rose covered stage and took a moment to acknowledge the seven other lives lost. His voice cracked as he held back tears, attempting to break the ice with humor, but the pain he felt was obvious as he said, “Kobe’s face and Kobe’s number, Gigi’s face and Gigi’s number will always be remembered.” He then asked the crowed to turn to each other and embrace, the way people only do in church and at sporting events. As the stadium embraced they chanted Kobe’s name over and over again, supporting each other as they grieved.

The stadium then broke into an uproar as wife of Kobe and mother of Gianna, Vanessa Bryant, took the stage to speak. Jimmy Kimmel had said that Vanessa invited people to The Staples Center because she knew that the people needed it, and that was obvious as the crowd shouted their support to her, saying things like, “We love you Vanessa.” Her voice was shaking with emotion as she said she loved that person back, without having to know who they even were.

She began her speech with her ‘baby girl’ Gianna Bryant. She shared how GiGi would give her morning and evening kisses, even while Vanessa was asleep because she knew how important they were to her mom. She shared how Gianna made a birthday cake for her dad on year, and how she loved to bake. Her grief was evident in her voice as she said, “Her smile was like sunshine.” And she proved that Gianna truly had the Mamba mentality by offering to give the boys basketball team some pointers, and she was planning on changing the way women were viewed in sports.

“Gianna made us all proud and she still does.””

She then moved to Kobe, her ‘soulmate.’ She talked about her deep connection with Kobe, even when she first met him at 17 and a half, saying they, “Balanced each other out.” She talked about how thoughtful, romantic, and driven he was, and how she hoped they would grow old together. She boasted about Kobe’s dreams for his daughters; he wanted Natalia to take over his company, he knew Gianna would be the next WNBA star, and we wanted to convince Bianca and Capri to take up basketball as well. She fondly referred to him as the, “MVP of girl dads.”

She shared a story of the time he accidentally picked up the girls from school late after he retired. Because Kobe always knew there was room for improvement, he showed up an hour and twenty minutes early everyday after that. She smiled as she confessed she was glad Kobe got to hear Coco say “Dada,” before he passed. And as she closed out her speech, she said something that had every person watching shed a tear, “Babe, you take care of our Gigi.”

“God knew they couldn’t be on this earth without each other.””

Then it was time for the next speaker, WNBA player, three time champion, two time MVP, four time Olympic gold medalist and Don Lugo alumni, Diana Taurasi, nicknamed “The White Mamba” by Kobe himself. Tearfully, she shared her passion for the game, and how Kobe was always her hero. He made her believe she could be a Laker one day. Even as she jokingly compared Gianna’s talent as a 13-year-old to Lebron’s talent now, the pain she felt was evident as she broke into sobs. She ended her speech by promising to continue Gigi’s legacy.

Sabrina Ionescu, college basketball player for The Oregon Ducks, shared how she grew up watching Kobe and wanted to be just like him. She reminisced about seeing Kobe and Gianna courtside, and feeling her jaw drop at the sight of the two legends,”She had a fade away better than mine.”  She even went as far as to say Gigi was the future of the WNBA. She ended her speech by saying that Kobe made a generation, “Where being born female didn’t mean being born behind.”

Gino Auriemma immediately began his speech by saying he was there as a father, not a basketball coach. He said how obvious it was that Kobe loved his original team: his family. Gino then joked about how passionate Kobe was about teaching his Mamba team the best way he could, “The uncoachable one wants to talk about coaching.” He even made jokes about Gigi passing the ball, unlike her father, that had the whole stadium laughing together in a time of mourning. He made it clear that Gianna and Kobe created a new legacy.

Rob Pelinka, manager of the Lakers, former agent of Kobe, and one of Kobe’s closest friends shared how he talked  with Kobe everyday for 20 years. He shared the heartbreaking story of his 9 year old daughter missing uncle Kobe and Gigi, “Kobe always made me feel like I was queen of the world,” she said as she cried over the loss that’s effected so many.

“When God made Kobe, his next step was to fasten Vanessa.” ”

Alicia Keys then performed Kobe and Vanessa’s favorite song Moonlight Sonata by Beethoven, accompanied by a string orchestra. Vanessa was crying in the back, looking up at the jumbotron showing rotating photos of gianna and Kobe. After her performance, Alicia Keys put her hands into a pray position and looked up at the sky, with tears in her eyes. The emotion weighed heavy in the air.

Beyonce and Vanessa embraced as basketball legend Michael Jordan took the stage to speak. His voice cracked and tears ran down his cheeks as he said, “He was like my little brother.” With as smile he talked about the time Kobe asked for tips on his jump shot in the middle of their first game against eachother, and how Kobe would constantly bug him at 2 AM hoping to improve himself.

The stadium went quite as a string orchestra set up the stage for the final performance of the celebration as Christina Aguilera performed a heartwarming song in Italian, the language of the country where Kobe was born. The final closing of the event was, fittingly, Kobe’s very own project. The stadium roared to life, as Kobe’s Oscar winning short film “Dear Basketball” played. The film was created as a goodbye to basketball, but as it played through the stadium, it served as Kobe’s goodbye to his fans. Jimmy Kimmel officially ended the celebration by sharing Kobe’s foundations, and a reminder to hug the people you love. As the camera’s panned out, the crowed could be heard chanting “Kobe! Kobe! Kobe!”