Don Lugo Varsity Football’s not going down without a fight! 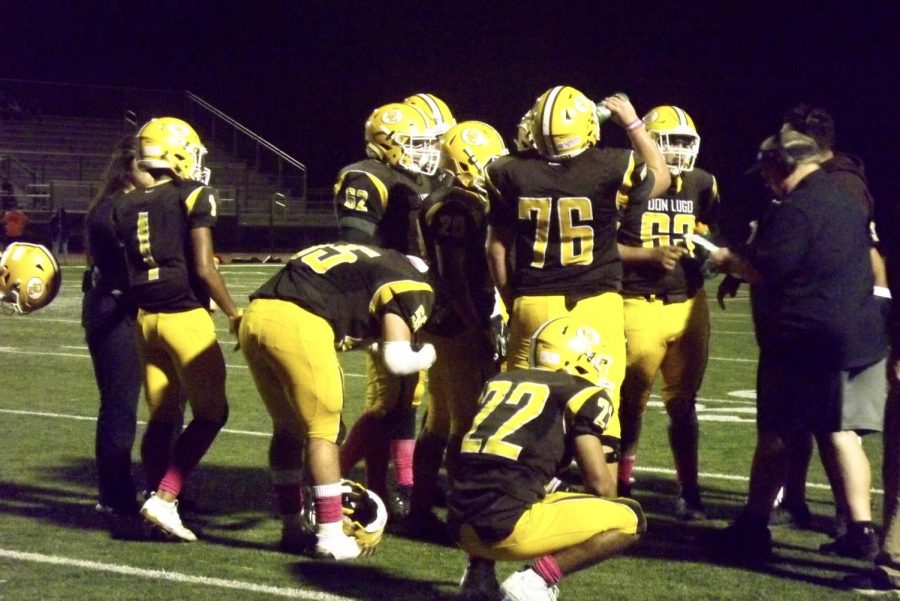 Don Lugo’s Varsity football team has fought through countless struggles, such as injuries and lack of energy on the field, culminating in a disappointing 1-6 season (0-2 in League). Game by game, Lugo has been able to put up good fights against their opponents but haven’t had the ability to capitalize when finishing games and have continued to come up short.

Over the past few weeks, Lugo was able to secure a win against California High after coming off of a bye week. Even though Steven Cabrera was still injured, being able to watch his team win made him overjoyed: “They worked really hard and they deserved it.” As the team hoped to carry the momentum following the win on senior night, they were suddenly hit by a big loss to Chaffey High losing 42-12, which was followed by a 21-14 loss to Ontario which was referred to as a “nail-biting” game.

One of the main factors that may have contributed to these losses is the fact that a lot of the team has been struggling to stay healthy. Team Captain, Branden Garcia, explained, “People don’t understand what we’ve been going through. We only have like 20 players while other schools have 50.” Their team is misunderstood because of injuries and suspensions, which have become a heavy burden, especially through the depth chart where one player may be playing multiple positions and causing fatigue.

People only ever see the score at the end of the day.”

Injuries have been Lugo’s football season killer. Quarterback, Johnny Valdez is out with a shoulder injury, middle linebacker Branden Garcia broke his hand, Ben Chavez has a dislocated elbow, and Jason Garcia has a broken ankle. The injuries are taking its toll. After the long stressful game last Friday, in an act of anger and frustration, he punched a locker. His injury will require a cast and require him to sit out a game. Branden lamented, “It was very selfish on my part because now I can’t be there, to be with my guys and help them.” The boys agree that the lack of total players made injuries and missing players even more crucial.

The team still believes they will make CIF, these losses will not kill their morale, and when asked if their opinions from the last interview had changed now, they all agreed that it has not. All three boys that were interviewed say they they are ready to keep pushing and getting those wins, they are not going to give up. Player Branden Garcia is reported saying that the team is building from the broken pieces and getting ready to win. “I’m fired up, I’m ready. Ever since that injury, I’ve been wanting to play so bad”- Gary Garcia.

It’s not just about the game, it’s about being there for your team.”

Although the team struggles on the field, the team and their brotherhood is still there and as strong as ever. This phoenix of a team is going to rise from the ashes to win and persevere. The team hopes to finish the season 4-6 and make it into CIF, so hope is clearly still strong with the team. Branden Garcia finishes with strong words, “I still have your back, on and off the field, no matter what mistakes you’ve made or mistakes I’ve made. No matter what, we still each other’s backs.”

FULL EXCLUSIVE INTERVIEW HERE! (copy and paste the link to your browser) 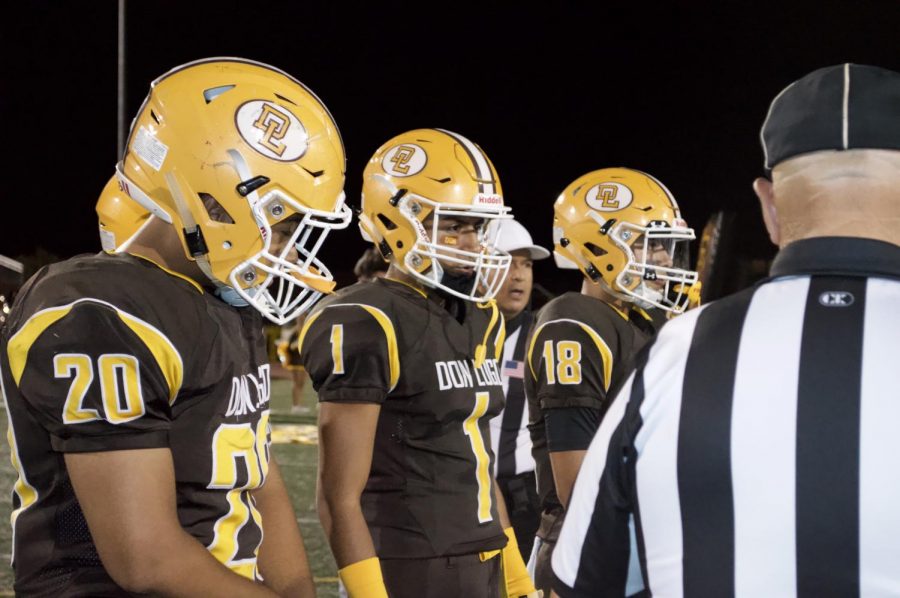 Don Lugo football captains during coin toss before game. "It was just a strong effort from us out there." -Coach Gano

Through the rough and disappointing start of Don Lugo’s football season packed with injuries, suspensions, and lack of energy, the Conquistadors have finally regained their footing and have proved everyone wrong as they have taken home 3 much-needed victories for their shot at the CIF playoffs. With the past behind them and the countless amount of losses Lugo has faced, the Conquistadors aren’t done with the year as they continue to push themselves in the bracket of the CIF playoffs.

Going back to when the winning steak initially started, Lugo had a rough start for the beginning of league as they took two losses in a row to Ontario High and Chaffey High. However, this talented football team suddenly flipped the switch and turned their doubtful season around in a matter of 48 minutes as they beat Montclair High in a blowout victory of 36-12 giving the Conquistadors their 1st win of league and their 2nd win overall. This blowout victory would soon change the momentum and energy of the hopeful football team.

After the highly-needed win against Montclair, Lugo would then face off against their rivals, Chino High, for the annual Milkcan game. The game was held at Lugo and was hyped up throughout the week, making the need for a victory even stronger. As Lugo hoisted the Milkcan trophy after a nail-biting 15-14 win, their record would then improve to an average 2-2 in league, which would lead them to their final game of the league season.

The last game of the season was a dramatic one, as Lugo needed to maintain a record of 3-2 to have a chance to advance the team to CIF. They faced off with Diamond Bar High, and the game was a back-and-forth competition, as each team knew what was on the line. The game came down to a field goal by the freshman female kicker, Mackenzie Aguilera, who nailed the kick to bring the game to a close at 16-13.

I couldn’t have done it without my brothers (team), cause they set me up for the kick.”

Momentum and energy both played key roles when Lugo began their winning streak as they were told these last three games were “must-wins”. After having an interview with the Lugo football players, they spoke about how the energy and momentum to the team has changed ever since enduring those two hurtful losses in league. Star running back and safety JoJo Galindo emphasized, “I think the energy has changed as a team, it just has only gotten better.”

Those back-to-back-to-back wins from Lugo to give them a solid 3-2 league record, and increased their chances of making CIF playoffs, as they were now tied with 2 other teams to see who would advance or not. The downtime from the win against Diamond Bar to the decision from the coin flip caused anxiety among the players. However, to defensive captain Branden Garcia, he stated, “I knew we were going to make it– we just worked too hard this season for it to be decided by a coin.” Surely enough, Branden was right, as they got the news last Sunday that the Conquistadors were in the playoffs.

Although the celebration that Lugo made it to the playoffs for the 6th time in a row was a huge success and a massive turnaround for the lively team, their job isn’t finished as Lugo will be facing off against Burbank High who have quite a history.

Lugo hopes the addition of Johnnie Valdez who was absent due to injury in the 3-game winning streak will create more opportunities for their offense in hopes of advancing to the 2nd round of the CIF playoffs.

I just told him you gotta step up and lead the team, because every team needs a quarterback.”

— Johnnie Valdez (On tips and advice he gave to JT Cortinas)

Before the outcome of the 1st round of the playoffs between Don Lugo and Burbank, it is safe to say Lugo football has had an insane comeback of a season. From everything going wrong, to a major shift in performance from this talented football team, Lugo strives on progressing through CIF in hopes of making it to their Holy Grail.

Team photo of Don Lugo's Varsity football team. "It was a well fought season, but next year we will come back stronger."

If you want a picture to show with your comment, go get a gravatar.