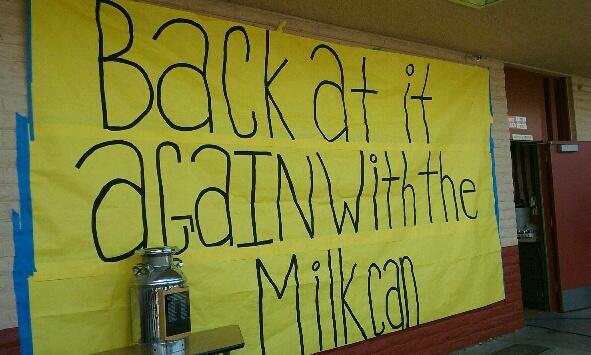 This poster made by Isaiah Ruiz defines a funny phrase that went viral online. Substituting a few words and accommodating them to fit what Isaiah visualized, using the win for the milkcan as an advantage, became the laugh of the day. Isaiah says "We won it once, we won it twice , back at it again."

Don Lugo commemorates their victory for bringing home the milkcan with a pep rally at lunch. The lunch time pep rally took place this afternoon in the quad. The event included music, a performance by the cheer team, and an appearance from the football team with the milkcan.

For some students this is their first time witnessing the milkcan in their very own school. Bringing out the milkcan during the lunch pep rally brought excitement to everyone. Students crowded around the can to pose and take pictures, Anissa Carcido says, “I’m happy to see the milkcan back at our school where it truly belongs.”

Brianna Cabrera commented, “I think the pep rally went really well and it will definitely help build school spirit throughout the year. ASB president Isaiah Ruiz thanked the cheer team for their hard work in supporting the football team throughout the game. Mason Lopez spoke on behalf of the football team giving them a quick shout out and inviting everyone to the next game on October 7th, 2016.