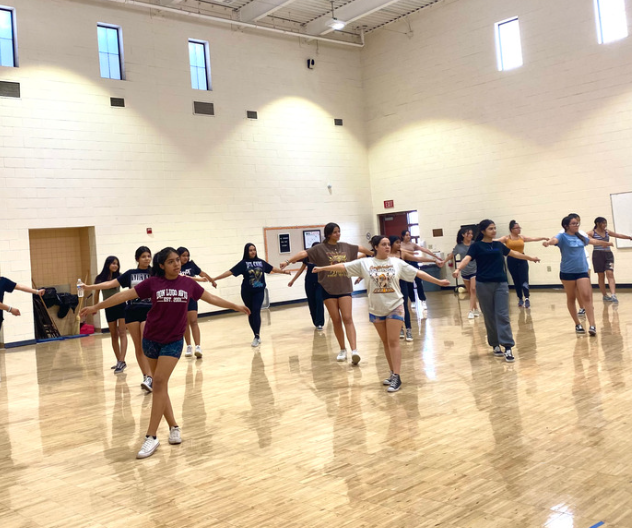 Hip hop as a dance genre has evolved so much from its original form and has become relevant in mainstream media throughout the years due to its ever changing and adaptive nature! Hip hop started off as an improv street dance, that later became a genre of dance that is performed not only on stage but also on media like movies, music videos, and more. Its flexible definition and wide variety of movements has allowed for all sorts of dancers to indulge in the genre without feeling restricted or needing to follow strict rules to simply dance and have fun. “You know, it’s just having fun and expressing yourself through dance”, says Alicia Magadan, a senior at Don Lugo who has been a member of the school’s hip hop team since her freshman year.

Hip hop culture originated in the Bronx of New York City during the late 1970’s from both African American and Latino communities. At that time and place, these specific communities were going through several hardships and weren’t prioritized by mainstream media, so as a way of coping, they created their own form of art.

Breaking was the first style of hip hop, then party dance stemmed off of that and became its own style of hip hop. Party dance and the addition of salsa, Cuban mambo and rumba, Brazilian samba, jazz dance, and even martial art influence is what really took that first big step towards creating hip hop as a versatile genre. It helped dancers see how they could take the genre and make it into something that fits their style without sacrificing the creative aspect of dancing.

Hip Hop stands for present action and represents freedom, learning, and growing, so naturally, it was going to evolve into something more and allow those dancing it to freely move to the genre without feeling tied down because of rules or such. “I think that hip hop is a really good way for people to express themselves and be able to showcase their own creativity, even if they don’t have technical training. Hip hop allows pretty much anyone to be able to dance which I think is what makes it so unique”, says Casey Avery, Don Lugo’s dance teacher.

Regardless of how many times the idea of what hip hop really is changes, at the end of the day, it’s still what it once was and more. “As generations get older, a lot of new dancers have different ways to express themselves. So as hip hop changes, I feel like it incorporates everyone’s new ideas and the old traditional ways so that it’s an even bigger and better genre where everyone can feel included with different ideas”, says Melody Thi, a graduated hip hop team captain.