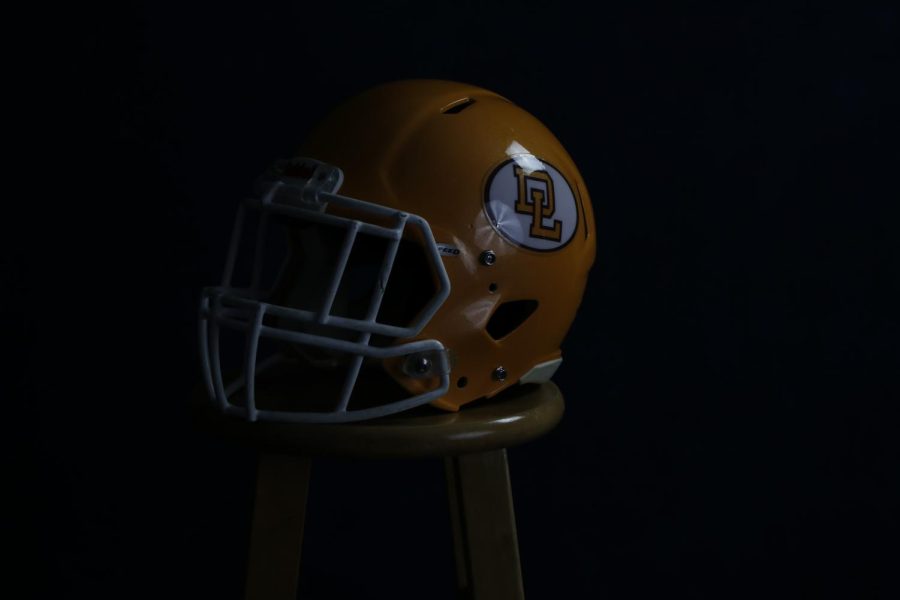 Football photo illustration Photographed in our studio of a Don Lugo Varsity helmet.

Hazing is the act of making someone do something or taking advantage of someone to make them feel like they are part of the group. The court ruled that an “unnamed school” was in violation of the victims Title IX rights.“The department’s Office of Civil Rights announced on Tuesday, April 5, that the district violated Title IX, the 1972 federal civil rights law that prohibits sex-based discrimination in schools,” wrote Beau Yarbrough. Even though the event that sparked these legal issues is long gone, it doesn’t mean that the battle against hazing should be over.

Even though this happened in the past, this event is a dark stain on the legacy of a once-great Don Lugo program. A sport that was highly respected, crumbled at the hands of stupidity, disrespect, and perverted activity. In my experience at Don Lugo, that story was only ever brought up as a joke, never as a lesson, and never as a warning. This goes to show that sick sense of humor running rampant allows such disgusting acts of harassment to happen over and over again.The effect that hazing has on a student is like bullying or even PTSD. Victims are in constant fear of what might happen next, or what might be done to them. Loving a sport or activity just to have that love put to the test by such disgusting people will leave victims lost and looking for what made them happy in the first place. Just for their voices to be taken away, their love for the game, and their feeling of safety at our school. “…Students 2 and 3 would come towards him, he would tell them ‘no,’ that he felt ‘uncomfortable’ and ‘harassed’ because they ‘overpowered’ him and he felt weak in that position; and that he felt unsafe because he felt it could happen again,” wrote Beau Yarbrough the reporter that spoke on the ruling.

The court found our school district guilty of these charges this time.  Let me make this clear, all types of hazing is a widespread virus that’s present in every single sport. I have heard hundreds of stories, but the problem is the right people don’t hear about them. The athletes whose voices were stolen by their abusers and given the trauma that they have to live with. Hazing is not a joke, it’s not funny, it’s not something that happens just at Don Lugo. Hazing is present at all schools around the world, and little to nothing is being done about it.

In 2014 a very similar issue occurred at Ayala High School in Chino Hills. Twenty-one students were suspended for multiple days.”Details of the alleged hazing were not immediately disclosed, but several students told KTLA that the incident involved members of the football team attempting to sexually assault a freshman player with a foreign object,” explained John A. Moreno, a reporter for KTLA. Even though this event was a little less mainstream, doesn’t mean that it’s less important. There is a shocking amount of schools that have this issue and a lot of students that have been assaulted never come out with the accusations.

For those that don’t know, teachers are required to do a briefing on Title IX at the beginning of every school year. I propose that this is used more, training athletes and coaches that aren’t directly employed on campus about what is expected of them. Especially promoting a healthier and safer environment in order to better protect our students. Directly explaining the consequences of a bystander or someone who is assaulting another student.

As we enter a new era of Don Lugo sports it has been clear to me that all the coaching staffs want to know when this happens. Speak up, save yourself, and help others. The people that are doing these acts no matter if it’s hazing, SA or any other form of harassment. They don’t have power over you. They can’t hurt you more than you may think, fight back, be strong, and never let someone get away with anything. “The long-term health effects related to sexual harassment and assault is not just about the impact that it has on a person’s mental health, This study is evidence that this kind of trauma has a real and measurable physical impact, which needs to be considered,”said study author Karestan Koenen. Please speak up for any types of assault, help others, and remember that you are not alone.

If you need to report or talk to someone about anything I highlighted, Email Coach Donoho ([email protected]) or give him a visit at any time. Report any form of SA or harassment. The office and your coaches will also be available to help.