Opinion: An athlete’s mental health should be given more attention 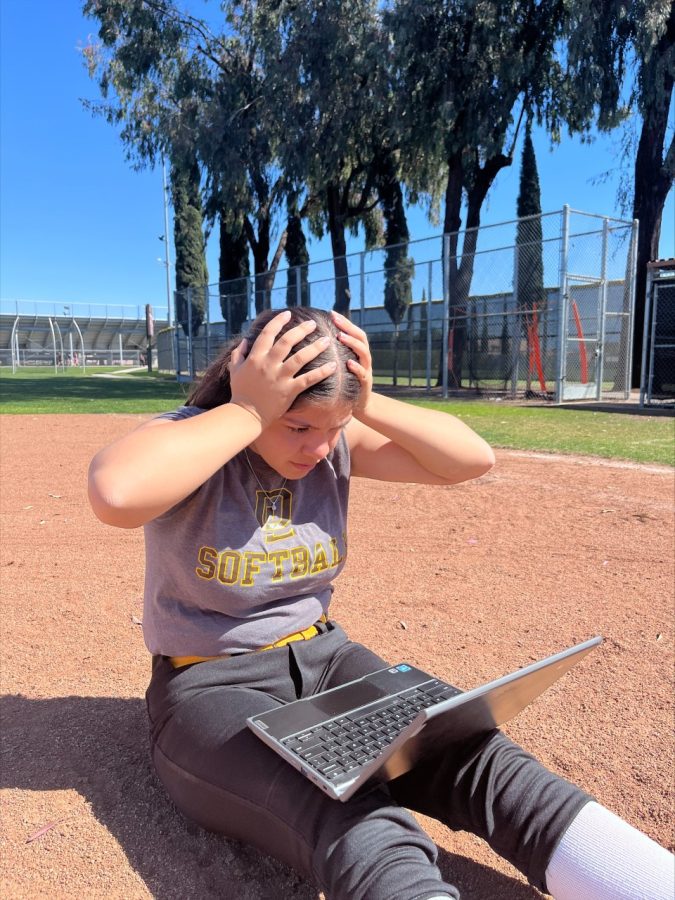 Malena Villa is stressed with homework right before the start of practice. " You never want your mental state ruining something that you like to do," says Malena.

Mental Health has been the center of attention of students’ wellness for some time now. We often focus on mental health issues with students that come from harsh families. This conversation should always include athletes; with their long days and stress of letting down their team, more student-athletes have come out saying that they struggle with mental health. This has not only been true of professional and collegiate athletes but high school ones as well. Studies have shown that 32% of high school athletes struggle with some sort of mental illness including anxiety, burnout, or depression. A recent event has shocked the sports world and has opened up a larger conversation about the mental health of student-athletes.

On March 1, 2022, Stanford Women’s Soccer Goalie Katie Meyer passed away, it was later revealed that her death was self-inflicted. Katie took her own life and Stanford has vowed to offer more student wellness services for students and student-athletes alike. This measure is far overdue and much too late for Katie Meyer and other college athletes that have taken their own life. In any instance, the death of a student is heartbreaking, but knowing that a school could have done something to prevent it should be more than enough evidence to show that a change needs to be made immediately.

Cheyenne Fernandes is a dual-sport athlete and captain of the varsity volleyball and softball teams. She is also the president of the Interact Club which is currently working on starting a ‘wellness room’ for the students of Don Lugo. “An athlete can not be an athlete or a person without taking care of their mind,” says Cheyenne. She also agrees that there should be an athletic counselor to help student-athletes because “the game is 90% mental”.

Student-athletes are surely open to having a specialized athletic counselor; this person would not only benefit athletically but academically as well. If an institution were truly dedicated to the health and wellness of its student-athletes it would seek and implement resources to keep them in the best shape physically and mentally.

When athletes have physical injuries, nobody blinks an eye when they take time off to recover. Although mental illness is not an injury that you see in an MRI scan, it can be as damaging to an athlete. This narrative of athlete mental health has been scrutinized in the media several times when professional athletes are brave enough to talk about it.

Simone Biles, Micheal Phelps, and Serena Williams have come out to media openly saying that they struggle with their mental health. Mental Health should be as openly talked about as physical injuries. Being an athlete at any level comes with the stress of knowing that people are watching you at all times. That pressure can easily get to anyone and should be given more attention.

When Simone Biles opted out of the Tokyo Olympics, Russian newspapers criticized Biles’ decision by publishing stories titled “Inglorious End”. This is the same country that beat the United States in the overall competition. Simone Biles came back from the disapproval saying “We also have to focus on ourselves because, at the end of the day, we’re human, too”

Simone should not have faced this kind of backlash for bravely speaking about her personal life. Athletes should be supported and offered help to make themselves better athletes.

“1000% yes, there should be a counselor available that is suited for athletes,” says Paul McNaughton, senior water polo and volleyball player. Paul says that playing sports has changed his mental health. He believes that protecting the mental health of athletes is important and schools should feel the same way.

In my opinion, every school should have not only an intervention counselor available but an athletic counselor or psychologist available for the mental health of our athletes in the same way that every high school has an athletic trainer for the physical health of athletes. Growing up as an athlete, physical health and eating right, were glorified. We were taught to stretch correctly, eat healthily, and otherwise take care of our bodies. Coaches, schools, and admin must be made aware that the mental health of our athletes is just as important as their physical well-being.

The actions or lack thereof, have directly resulted in the deaths of too many athletes and they (schools, universities, and colleges alike) should be ashamed that it took the death of a student to start thinking about making a change. Schools must do better in terms of protecting their student athletes’ mental health. We must put the person before the student and the athlete otherwise we are at risk of losing all three.