Opinion: Off-season is vital to an athlete’s success 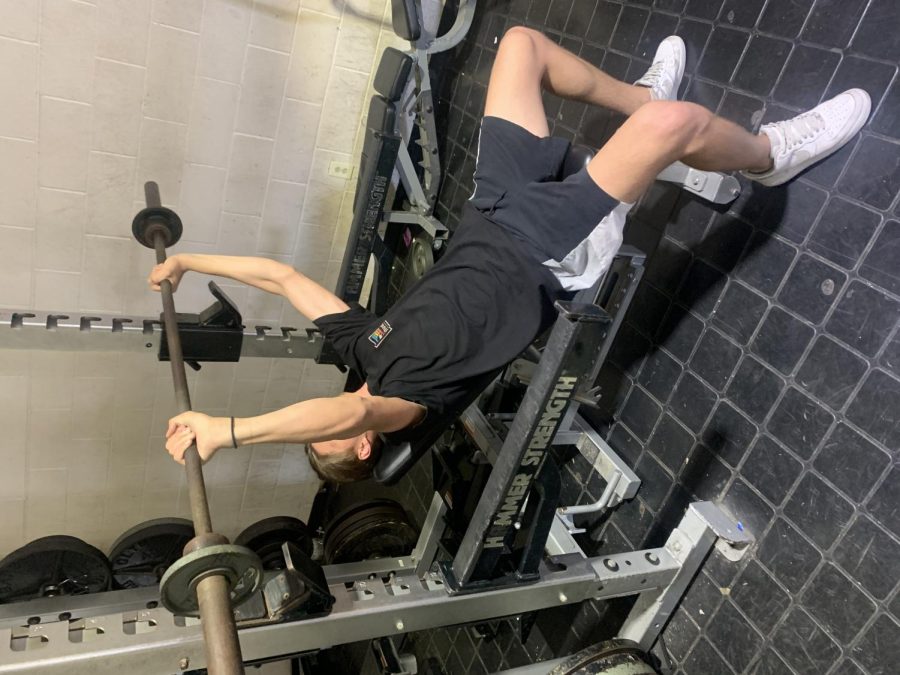 Luke Kemble, an out of season football and basketball player is in the weight room bench pressing during his off-season. "The off-season allows me to get stronger everyday", Luke says

Many people that don’t play sports may think that the majority of practice you do for your sport is during your season but that myth if false. The off-season is the most important part of the entire year for a student-athlete or even just a professional athlete in my opinion. When I was trying to get better at my craft, I was putting in work during the off-season, it wasn’t the time to relax or take time off, I think that’s what separates athletes that are serious and want to take their sport to the next level.
My experience as an athlete changed my perspective on life and the way I do things. When I realized that the off-season is the biggest part of sports, it changed the way I played and the way I thought about my sport. Once you’re in the rhythm of training, waking up early, and all the little things it takes to get better at your sport, it is like an addiction. When I was in the flow of training six out of seven days a week, I loved it, and even on my day off, I wanted to work out or do something to benefit myself. To become better at your sport you can’t just go to your practice during the season and expect to get better. In my mind during the season is the time to show off the things I have worked so hard for during the off-season.
The off-season is the time for all athletes to get better at their craft by weightlifting, running, or conditioning. This also allows for healing of any injuries that an athlete got during season. The off-season is also a time for an athlete to decide if they want to take their sport to the next level. I think that the off-season is my favorite part of sports in general because of the opportunity to work hard and give it my all to get better. Playing football as a quarterback influenced my work ethic and I still do the same drills that I’ve done since freshman year to prepare myself for college football. Getting a personal trainer also really benefited me and was one of the biggest things that helped me when playing football.
Hunter De Los Reyes a four-year football varsity athlete states, “Being on varsity football for all four years at Lugo wouldn’t be possible if I wasn’t training during the off-season to get better at my position.” Every serious athlete will create a training routine and find ways even with a busy schedule to get a workout in or a training session with someone. Hunter also states “Even now I still follow the routine that I’ve been doing since I came into High School, but one of the biggest things that helped me was going to camps because they would critique me and I would base my training off of the things that they said I trouble on.” That is another big thing that helps all athletes not just football players are camps, camps could benefit you in many ways by the issues that people see or just getting your name out to colleges.
The off-season for an athlete is a time for training, discipline, and focusing on getting better. Every athlete should be dedicated to their sport and take the time to better themselves as an overall athlete. There is no doubt that training in the off-season makes for a better season for athletes everywhere.