Varsity Girls Soccer has success this season while making history 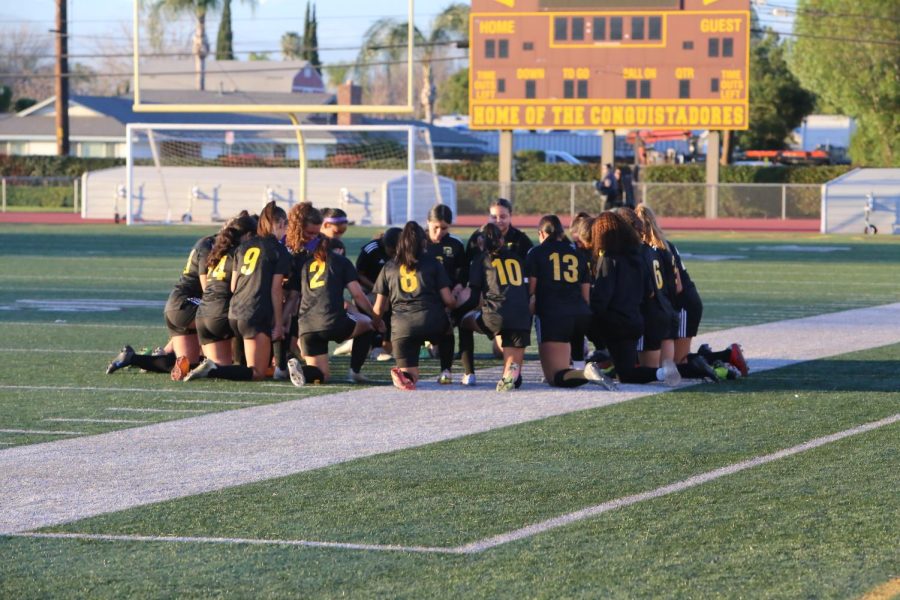 The Don Lugo Girls Varsity Soccer team is doing their daily prayer before the big game, "We have a strong offense and defense that can get us far" says Coach Swift.

The Don Lugo Varsity Soccer Girls team has made history. The girls’ soccer team had a rough start through their pre-season, but eventually clinched a clean record of 10-0 for Mount Baldy league play. The Girls Soccer team had an average amount of competitiveness during their league games, but all the nerves led up to the 2 games of facing Montclair High School.

After 7 years straight of losing to Montclair during league games, the girls have finally turned that around. In the 2 games against Montclair, the Don Lugo Girls Soccer pulled through and won Montclair both 2-0 and 2-1. These 2 incredible wins boosted the girl’s confidence to keep winning and eventually go undefeated in league. The Girls Soccer Team ended league with a 10-0 record and a ticket to the Division 4 CIF playoffs.

As the girls approach CIF, the games start to get more competitive and nerve-racking as each minute passes by each half. The girls took on their first CIF game against Charter Oak and took the win 6-2, “I just want our team to have confidence in each other and together as a team. If a Don Lugo Soccer Team was to go far in CIF and win it all, it would be this team” said Varsity Captain Michelle Vasquez.

“I have so much confidence in these girls to make it far as a team. If we work together as a team and fix our mistakes, something great is bound to happen,” said Varsity Coach Mr. Swift.