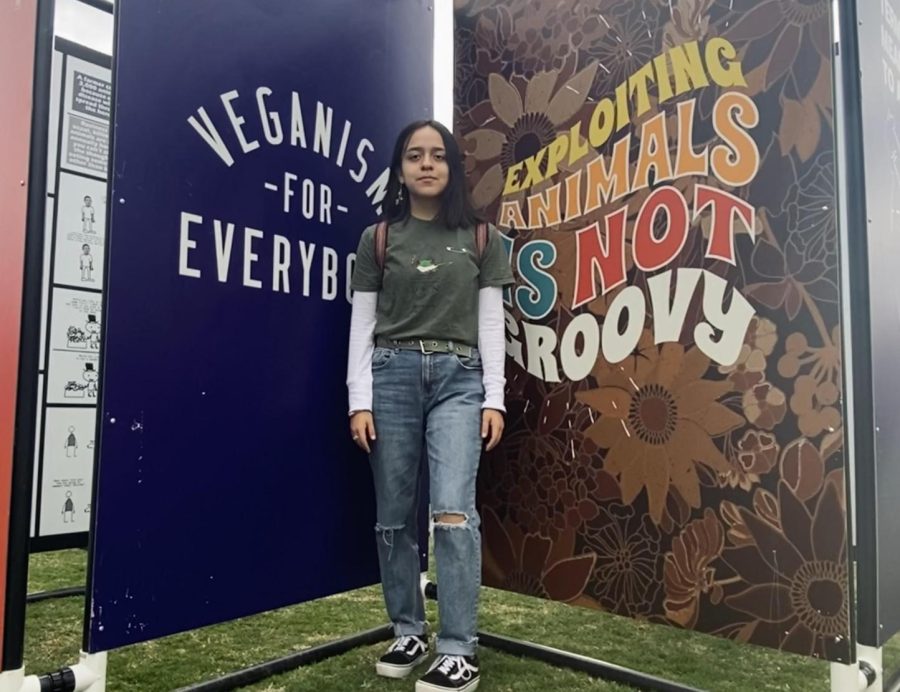 Camila Aguero-Salas, senior, at the 2021 Vegandale festival in Los Angeles. "It was a great feeling to see that there are so many locals and Angelenos like me trying to make a difference, by simply changing the way we eat," says Camila.

Every new year people are inspired to “begin again” with new aspirations and with motivation to step out of their comfort zone. However, there are issues that follow people into the new year, including the pandemic, and the ever-worsening climate emergency. Among climate enthusiasts, a popular term that is thrown around in the plant-based community and among the general public is Veganuary.

Veganuary, a blend of the words Vegan and January, is a campaign from a non-profit organization that challenges people to go vegan or eat only vegan foods for the whole month of January. Along with new years resolutions such as going to the gym, or trying to improve one’s mental health, this campaign gives people not only a chance to try something new but also a chance to help the planet at the same time. Studies have repeatedly shown that cutting animal products such as meat, dairy, eggs, and fish, out of one’s diet is one of the most impactful ways to lower one’s carbon footprint.

The founders started Veganuary with the intent to help animals, the environment, and human health. One of the main reasons people go vegan is to fight animal cruelty, especially since 50 billion animals were killed in 2021 for the consumption of animal products. Cutting out animal products also has significant benefits for health due to higher fiber intake, lower cholesterol, and lower risk of heart disease. For this reason, many athletes such as Venus Williams, Alex Morgan, and DeAndre Jordan have made the switch to plant-based.

In terms of the greatest issue of our time, climate change, one of the biggest contributors to harmful global emissions is the demand for meat and dairy. According to the Guardian, “the use of cows, pigs, and other animals for food, as well as livestock feed, is responsible for 57% of all food production emissions.” Keep in mind that the global production of food is responsible for one-third of human-caused emissions. Important ecosystems such as parts of the Amazon rainforest must be cleared out in order to make room for raising livestock, and growing food to feed the livestock. Food that could be used to feed the growing hungry global population.

Even though Veganuary only promotes going vegan for the first month of the year, which is not enough to stop climate change, it starts the conversation, and it helps people experience, even if it is for a month, how different it feels to change a simple part of life, which is eating. The question that arises, however, is how many people are actually being impacted by these types of campaigns. For starters, the game-changing Meatless Monday campaign has taken root in over 40 countries and is mainly spreading through word of mouth and social media. In the age of increased globalization, social media is the main gateway for how people come across trends and information. On Instagram alone, the hashtag #Veganuary has 1.7 million posts, and 445.5 million views on TikTok.

Veganuary not only challenges people to go vegan, but it also provides resources such as blogs or recipe ideas for anyone looking for guidance. One reason that many people steer away from the vegan lifestyle, is the fear of not being able to eat cultural foods. Though, another benefit of being vegan is that there are plenty of alternatives and substitutes that can allow for people to still engage in their culture through food, and to appreciate it more. Veganuary, as well as plenty of websites, blogs, and YouTubers, share recipe ideas for Mexican, Indian, Italian, East Asian versions of traditional plates. A vegan on Don Lugo’s campus, Ms. Peterson says, “Adding a variety of recipes from various cultural backgrounds can also show people that going vegan does not mean giving up culturally traditional dishes, but rather provides an opportunity to look at those dishes meaningfully and make culturally aware adjustments.”

Veganuary is also in touch with businesses, shops, and restaurants year-round to guide them in promoting veganism and products. Following suit with the promotion of veganism are fast-food chains, which provide a more viable option for people who may not have the opportunity to cook plant-based meals.

Fast-food chains such as McDonald’s, Burger King, and Starbucks have already changed their menu to include plant-based options through the use of Impossible or Beyond Meat. More recently, KFC’s launch of Beyond Chicken Nuggets has taken a storm, bringing the fast-food, plant-based agenda along into 2022. Additionally, Chipotle has announced vegan chorizo and the McPlant burger is set to be available in 100s of locations more around the country.

Restaurant chains not only allow for the word to spread quickly, but they also saved more than 700,000 animals from slaughter in 2021. Though that is nothing in comparison to the billions killed every year, it shows that demand for a certain type of food really changes the trajectory of menus in restaurants. The vegan population in the United States is now 3%. If just 9.7 million people can make that much difference, the benefits from more of the U.S. switching to plant-based would have notable effects, especially given the fact that the U.S. is third in the world to eat the most meat.

It does not go without saying that many fast-food chains, such as McDonald’s, are responsible for a lot of animal agriculture, and deforestation. The high demand for meat in the U.S. is largely due to the cheaper prices for meat and animal products, especially in food deserts where that may be the only outlet to survival. Partly to blame is the government for subsidizing more meat over fruits and vegetables. Because a lot of low-income Americans have become dependent on fast food, having the option for plant-based foods only makes sense coming from those same fast-food chains. Needless to say, these corporations have a long way to go.

In 2021, more than 582,000 people from 209 countries participated in Veganuary. As the numbers above, that may not seem significant and is definitely not enough to solve the climate crisis. Though one of the most important parts to solving this issue is the simple act of getting people informed and starting conversations. Even though people may not follow through with resolutions throughout the whole year, the reason why they come back every year, why people scramble for gym memberships in January, or why people write their goals down, or buy planners, is because they see an opportunity to change their life for the better. It is hard to follow new goals, or resolutions, or totally change the way one eats or lifelong habits. Even more so now because the pandemic gaged a lack of motivation among many individuals. Though, that’s why it feels all the more accomplishing when one does go through with something they never thought they could do.

The more we start to examine the unsustainable parts of society, such as the way we eat, the items we consume, or even the way the powerful have made us think they have to survive, the closer we are to real change. The actions people take will be imperfect, but is any meaningful change really perfect?