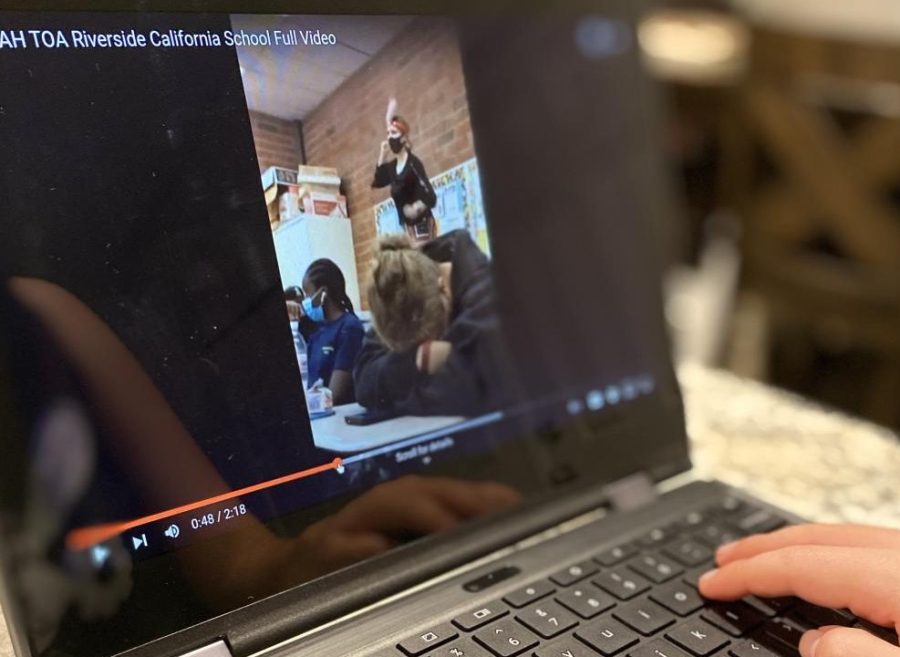 Student, Carolina Aguero-Salas, watches video of Riverside teacher mocking Native culture. This video sparked outrage across the Native community and others across the country. "Racism and unprofessionalism, this is why our education system is falling apart," says Nick Tilsen, CEO and President of Oglala Lakota Nation.

It is no secret that Native Americans have been mistreated in the United States since the birth of our country. From the Trail of Tears which occurred during the first decades of our country, to the modern-day where people still feel that they can mock Native culture. How is it that those with the longest lineage of any persons on American soil are those that are among the most oppressed in our country?

Since its beginning, the United States government has shown that it did not view Native people as worthy of respect or any human decency. Whether by making it acceptable for Native people to be called dehumanizing slurs or kicking them out of the places that had been their homes for more than a thousand years. Even now, the United States government still allows for discrimination against Native people, such as the allowing of pipelines through tribal lands, the fact that Native Americans have the highest rate of food insecurity in the country, or the high rates of murdered and missing indigenous women.

There is racism toward Native Americans even embedded in our school system. In a recent event, a Native student at a Riverside, California high school recorded their teacher blatantly mocking Indigenous culture before her students’ eyes. On top of the trauma that could have been faced by the Native student recording the video, the teacher by the name of Candice Reed put her students in a position where they may have felt that they couldn’t defend themselves or respond to a teacher because of her higher position, or simply because of shock.

The video, which went viral on Instagram, received outrage and disappointment from people across our country, and even our own school.

The Riverside Unified School District Board of Education responded to the incident stating “please be assured that this has our full attention and it will be addressed expeditiously.” Though they also said the teacher has been placed on administrative leave, it leads me to think, what other similar incidents could have occurred in the past. Although this incident has the full attention of the RUSD School Board, they have pressure to do so given the fact that the video went viral; had this incident not been recorded, this situation may not have even reached the attention of the school board.

Candice Reed is just one teacher. There are, most likely than not, many teachers or persons in the country right now who have gotten away with performing such acts, but without media attention, they are swept under the rug. However, it is important to note that an incident like this was possible not just because of the cultural blindness of the teacher, but also the lack of training to prevent racism and discrimination in the classroom.

This video caused many people to feel shocked and angered, especially because it is 2021. It is an expectation that people be culturally aware, especially regarding a group that has been marginalized and hurt for centuries. Sadly, this ideal world is not the case, and there are many Indigenous stories that are buried in history, or that are happening at this moment, but simply are not shed enough light.

It is the responsibility of the government to give Native Americans more representation and to respect the Native American Tribes’ sovereignty. Though, having media coverage is one of the quickest ways to spread awareness of the treatment of Native Americans, and can reach not only people across the country but also around the world. Just like this video that reached many eyes, it is important for those who are not aware of discrimination of Native people to this day, and those that are, to see these stories in order for our country to work towards giving Indigenous people the respect they deserve and have deserved for centuries.