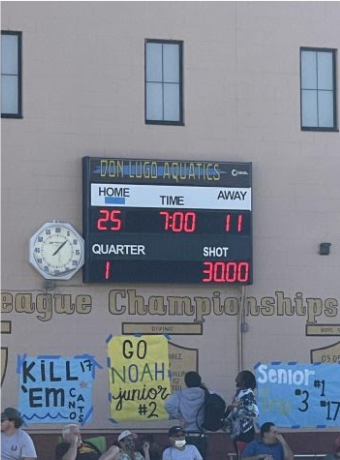 Don Lugo Water Polo beats Chino High School 25-11 to win league undefeated. “I feel great beating Chino and winning league as this would give us a boost of confidence for the playoffs," said Paul McNaughton.

The Boys Water polo team is a unique sport and Don Lugo is making a name for themselves. Water polo is a competitive team sport played in the water between two teams of seven players each. The game consists of four quarters, and the two teams attempt to score goals by throwing the ball into the opposing team’s goal.

Don Lugo played against rival team Chino High on Wednesday, October 27 with a victory win 25-11. This was the teams last league game of the year and they are now headed into the CIF playoffs. “This was such an important game to us but mainly to our Seniors because it was our last game and we’ve been through so much in the past four years in this program,” said Max Cantos, a 4-year water polo player. There were many mixed feelings for our senior players as they leave this chapter behind.

The Don Lugo Conquistadors started the 2021 Water Polo season in August and they are ending it with a total of 16 wins. There are many things to look forward to for water polo including trying to win each game in the playoffs which would boost water polo’s division for the upcoming seasons. “Also since we went undefeated in league we’re seeded pretty high in playoffs too,” explained Max.

With high hopes and expectations, many of the players feel like they can improve on their skills. “We need to improve on our communication, on the offensive side we need to let each other know what’s happening around each other so we execute more,” Paul McNaughton another 4-year water polo player states. These players are excited and more motivated after being undefeated league champs and beating Chino.