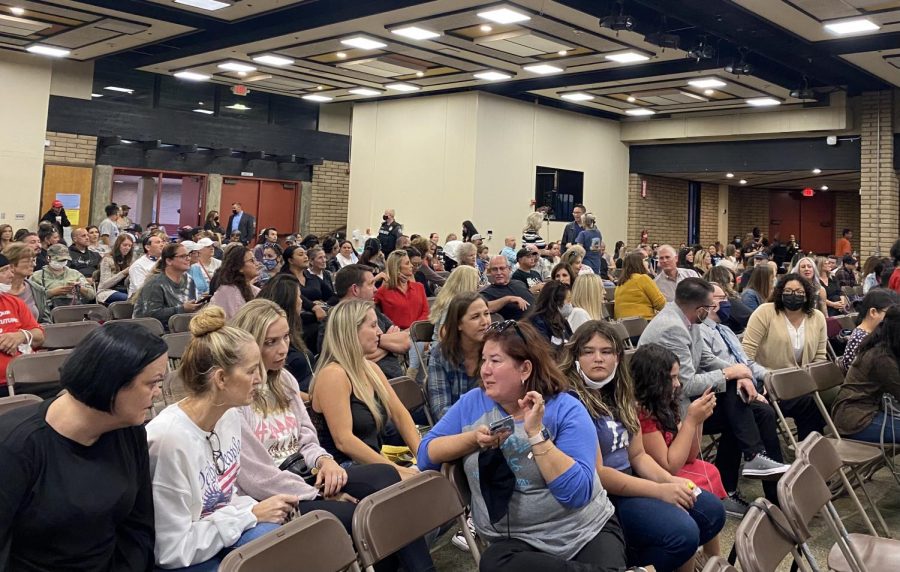 Unlike regular Chino Valley Unified School District School Board meetings held at the district office, the meeting for October 21, 2021, was held in the Multi-Purpose Room at Don Lugo. Though the meeting was scheduled to begin at 7:00 pm, at 4:30 the public was allowed to speak their opinions. Board member, James Na said, “I would like to have our families and parents and children speak on non-agenda item as we have done in the past.” Also unlike other board meetings, more people than usual were in attendance, especially parents and members of the community who are against the California COVID-19 vaccine mandate for students.

Many of those who attended the meeting had also been a part of the statewide protest that occurred on Monday, October 18, where parents who were against the mandate kept their students at home in order to send a message to the state government of their disapproval of the mandate. During the interval of time before the meeting where the public was allowed to comment, many parents came with shirts and signs that read “I don’t co-parent with the government” or “freedom not force.” The board also announced at the beginning of the meeting that further public comment and input would be reserved for the end after the issues on the agenda were covered.

After the issues of the agenda were discussed and voted on, many parents, teachers, and concerned members of the community stepped to the podium for a limited amount of time in order to share their comments. All who stepped forward expressed a want for the board members to use their power to fight against the mandate; “Fight for our children, do what you were elected to do, because if you don’t, we the people will,” said Nicole Vicario, District Staff Member. They argued that the only ones who should be deciding whether their child receives a vaccine or not is the parent and not the government.

Some commentators shared personal stories of how the vaccine had harmed their family or someone they knew. Others simply argued that their freedoms as Americans include the freedom to choose whether or not to get the vaccine. Some even stated that the vaccines and masks “don’t work” and that not letting an unvaccinated student come to school was a “form of discrimination.”

The comments lasted for more than two hours, and although some members of the audience left, most stayed throughout the whole night. During the discussion of the board on the passing of ESSER III, which was initially the main objective of the meeting, board member Andrew Cruz motioned for a follow up meeting, where parents and the public would be able to give their outlook on the allocations of the fund. The meeting is to be held on October 6, at 6:00 pm.