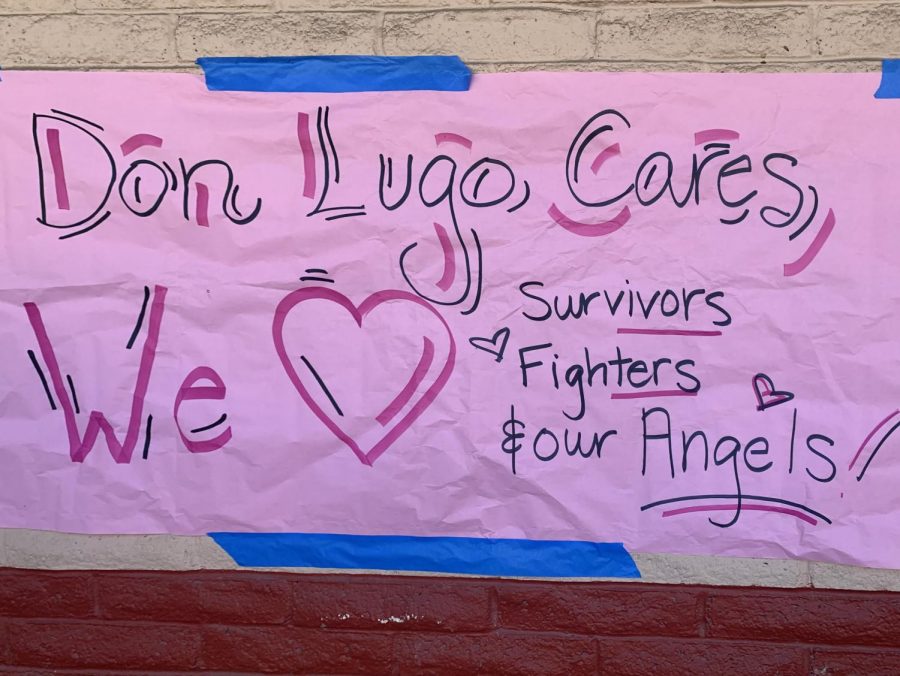 Don Lugo shows their support for all breast cancer survivors, fighters, and angels. Students were asked to "Pink Out" on Friday, October 22 in recognition of breast cancer awareness. Students could be seen wearing dainty pink ribbons, and vibrant pink shirts that paired well with pink socks; Don Lugo did not disappoint !

October, or what some refer to as “Pinktober”, is a month devoted to raising awareness about the effects of breast cancer. The idea behind Breast Cancer Awareness Month first originated in 1985 in which the American Cancer Society and the Imperial Chemical Industries had collaborated together to educate women about breast cancer. In contemporary times,  the National Breast Cancer Foundation is a world-wide platform working to share the stories of breast cancer survivors; working to “uplift women through early detection, education, and support services.”

Senior Kyla Rose has her own story to tell. Kyla has always viewed her aunt Marissa as something far more than just her aunt: she is her go-to when she experiences troubles of her own; she is her rock; she is her best friend. When finding out that her beloved aunt had been diagnosed with breast cancer, Kyla was not of age to understand the significance of breast cancer and the harmful toll it can have on those undergoing such pain.

As Kyla reflects upon this situation, she acknowledges the changes that her family collectively endured, including the loss of traditions such as going to North Lake Tahoe or attending the In N’ Out Picnic. Even despite the physical changes that Aunt Marissa experienced, Kyla states that “she still maintained a positive mindset, ensuring to me that she was going to be okay!” Kyla is happy to say that her aunt has been breast cancer free for two years now, and she encourages others “ to remember that everything does happen for a reason. For every negative, I promise you, there will be another positive !”

Sophomore Kadence Fordyce advises other students who are related to a family member with breast cancer to understand that “patience is vital; be supportive of your family member as they are going through a difficult time.”  As a young girl, Kadence had received the unfortunate news that her Aunt Tammy was diagnosed with breast cancer. She claimed that her aunt’s diagnosis had caused her family to become more conscious of themselves and their physical health; they understood the importance of mindful eating. Today, Kadence is grateful for the endless support provided by her aunt’s doctors, and she now cherishes the moments spent with Aunt Tammy everyday.

Exemplified by Kyla Rose and Kadence Fordyce, breast cancer stories can be very similar, yet so different in their own distinctive way. Let this be a little reminder that what you are experiencing might just be what your fellow peer is experiencing, sitting right in front of you or perhaps to the right or left of you – maybe even behind you too ! While we can choose to marginalize each other because of some “substantial” difference, in a broader context, we humans are much more similar than different. Our experiences, aspirations, and the knowledge to which we acquire, draws us together into one connected population as we stand together to defeat our problems, including the fight against breast cancer.

Currently at Don Lugo, sports games that are typically dedicated to breast cancer have been far and few this fall season in particular. While athletes wear some form of pink, whether it be attaching pink ribbons to their jersey, or choosing to wear pink socks under their cleats, some would argue that the sole devotion to establishing a “Pink Out” game for each sport was not as emphasized this month. Nevertheless, sporting events are a great way for our athletes to show their support for those who are battling breast cancer ; to promote the progress made in breast cancer awareness.

The fight is not over ; in fact, we are far from done. Awareness is the ultimate power, and we need action from EVERYONE. Breast Cancer is very TOUGH, but we will not back down to the notions of fear ; instead we will rise, for we are ENOUGH.