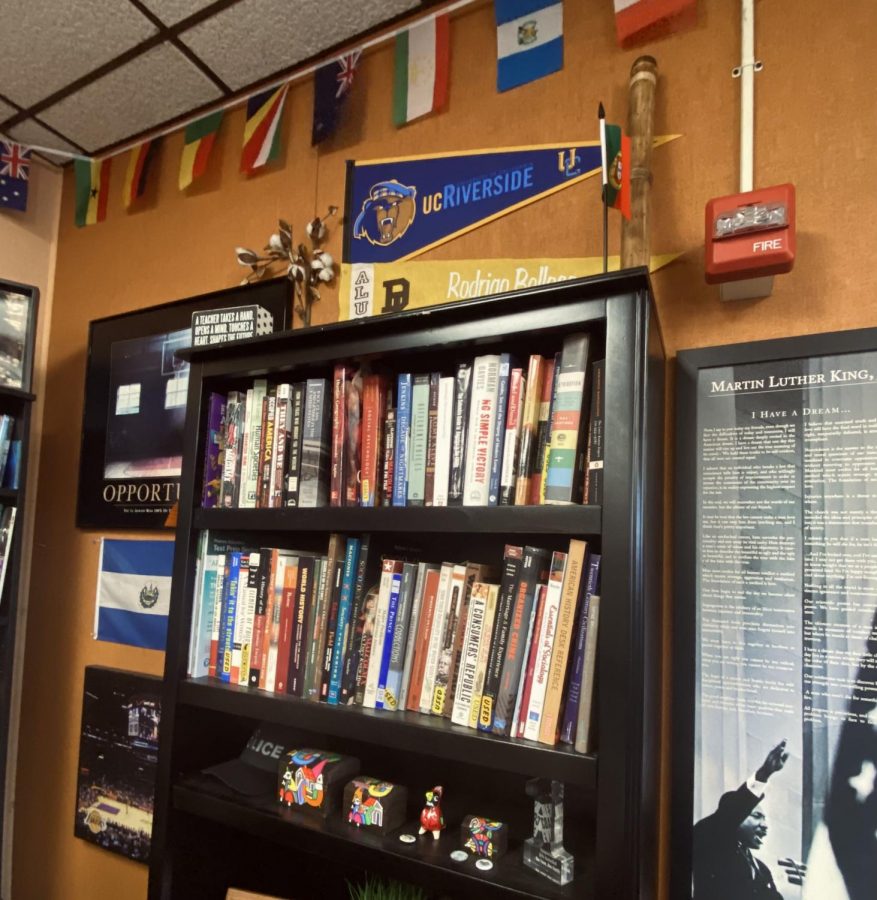 A bookshelf, filled with selections ranging from sociology to structured inequality, sits in Mr. Belloso's classroom. Mr. Belloso, who teaches AP Human Geography and World History at Don Lugo High School, will be most likely be expected to teach ethnic studies courses in future years, now that it is a graduation requirement for the state of California. "I am very excited about our upcoming ethnic studies course," says Mr. Belloso.

I grew up thinking that learning history that was centered around white people was okay since I lived in the United States where the majority of the population is white, therefore, my Chicanx/Latinx history was something that was to be taught at home. As a senior in high school, I now know that it is crucial for students to learn in the classroom about the ethnic cultures and histories that make up the people of the United States, in order to be aware of social inequities when stepping foot into the real world beyond K-12 schooling. The new law that requires ethnic studies as a graduation requirement for California, ensures that students can leave high school with at least a basic understanding of the ethnic groups that have been marginalized in the U.S. and use that knowledge for good practices beyond high school.

On October 8, 2021, Governor Gavin Newsom signed a bill, that had been years in the making by Riverside Assemblyman Jose Medina, who wrote the legislation. The law will require that like other graduation requirements, such as 3 years of English and 3 years of Social Sciences, students will need to take at least a semester of an ethnic studies course that follows the ethnic studies curriculum model. It will take effect for the graduating class of 2029-2030 and will require public high schools to offer an ethnic studies course by the 2025-2026 school year.

Though Los Angeles Unified School District, Fresno Unified School Board, and San Francisco have already taken measures to require ethnic studies as a graduation requirement, implementing it in the entire state is a huge step forward to creating future generations that are culturally aware. In light of recently publicized social movements such as the Black Lives Matter movement or the Stop Asian Hate movement among others, there is more need than ever before for students to learn about the causes and histories of this kind of oppression, especially in a place where they spend most of their time which is school. The ethnic studies curriculum will allow students to foster thinking of inclusiveness and understanding of how racism and bigotry play a role in social issues that have been happening, and that still is.

As a Person of Color, I would have benefited from growing up learning about people who looked like me in my textbooks. Looking back, I faintly remember learning about the Civil Rights Movement on M.L.K. day, and some on Cesar Chavez, which was about it. Most of the heroes, scientists, historical figures that we learned about and were taught to admire were white or from Europe. At times I lost hope from feeling that people like me could not amount to someone so important as to be mentioned in a textbook, as I’m sure many of my fellow POC folk felt.

The ethnic studies curriculum focuses on four main marginalized groups which are African Americans, Chicanos or Latinos, Asian Americans, and Pacific Islanders and Native Americans. A class focused on the ancestry and histories of People of Color, will give students a feeling of identity and empowerment. The fact that more than three-quarters of the 6 million public school students in California are not white, further stresses the importance of having a space in the classroom where students can reflect on their ancestors’ struggles, and for people who are white, to have an understanding and different perspective of the oppression of people who don’t have the privilege of being white or of European descent.

Although I will not reap the benefits of taking an ethnic studies course before graduating, I am happy for the future generation of students, especially People of Color, who can learn from a point of view different than the Eurocentric one that has been an eminent part of our education curriculum. It is long overdue and has been made possible through the fight of many people who paved the way for the conversation of even including this type of concept in our curriculum. Most notably, the student organizations in San Francisco State University and UC Berkeley, who took part in, at times, violent strikes in the 1960’s in order to have ethnic study entities in their schools.

There are opposing views to this type of curriculum being taught in schools, particularly by those who identify as part of the GOP. Some states believe that teaching what they refer to as Critical Race Theory, a concept on how racism is not just an individual construct but is also embedded in policies and legal systems, is harmful to children because it focuses more on how everyone has different identities rather than on their commonalities. It has led to legislation in some states, like Texas, for instance, that limits how race and antiracist concepts are taught in school in order to keep from harming white students who may supposedly feel self-demoralized or damaged.

However, school is meant to educate students about the world. If students do not know how racism has impacted our history, then they cannot have a sufficient understanding of how to combat social inequity outside of school. It is not demoralizing to teach all students, white or nonwhite, of histories that may seem too violent or faulting of a particular race, because it is a part of history and it is fact that white people have historically caused the oppression of Black, Indigenous, and People of Color.

The incorporation of ethnic studies into the high school curriculum, when students most likely have started having or already have a political ideology, is an imperative factor that will affect how students will behave as adults in society. Knowing how destructive the oppression of certain people, based on race, can be on generations of People of Color, is sure to be a motivating factor for students to make a change and to have an open mindset. As is worded in the Ethnic Studies Model Curriculum, “Ethnic studies should help students become more engaged locally, and develop into effective civic participants and stronger social justice advocates, better able to contribute to constructive social change.”