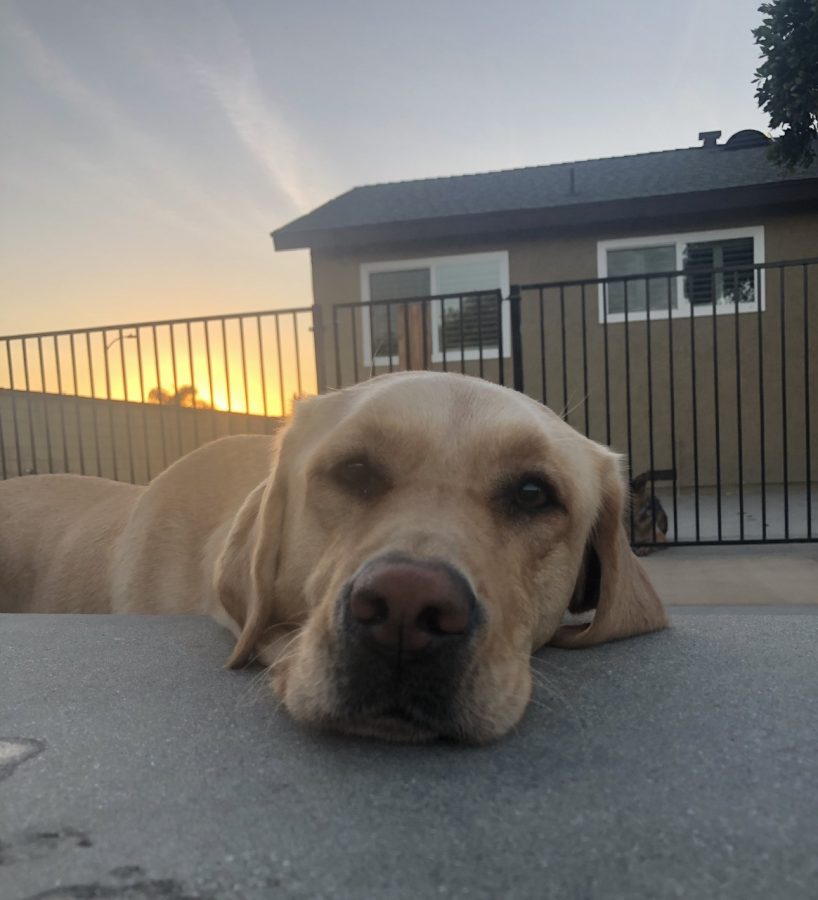 Tally is resting her head on the ledge of a juccuzi as the sun is setting in the background. She loves spending every minute of the day with her family, especially the late night adventures to the pantry.

There she stood, her dark yellow fur glistening under the sunlight, she almost seemed unrecognizable, would she remember me? Did she miss me as much as I missed her? Thoughts raced through my mind as I was reunited with the first puppy I raised, Tally. Now let’s go back a year to one of the hardest times in my life.

The pandemic took its toll on everybody, especially the Guide Dogs for the Blind organization (GDB). Tally was recalled in March, the beginning of the global pandemic and when things first started closing. There was much uncertainty, Tally’s initial game plan was completely changed.

After waiting nearly a month for news about Tally I was finally informed that she was placed with a foster family due to not having enough staff on campus in regards to social distancing. I had no way of following Tally’s progress, I felt stuck. Tally was with another family who would continue her training until things regained a sense of normalcy.

As months progressed I would receive occasional phone calls telling me how great Tally was doing, “Tally loves going to the beach with her foster family and they absolutely adore her, you did a great job raising her,” exclaimed Stacey Simon, the GDB instructor assigned to Tally. These words were meant to give me reassurance to not worry too much about Tally given her current situation. However, all it did was make it much harder for me to accept that she was hundreds of miles away while I was locked in my house due to the pandemic.

Tally was a huge support system for me.  She found ways to comfort me in forms nothing else could, and not having her throughout the pandemic was truly rough. But all that changed when I received the phone call.

Tally had eventually started official training and was making her way through the phases. I had noticed that she was on a phase for multiple weeks without progressing forward. This left me anxious and worried that Tally was having a hard time.

It was nearly a year since I had last seen Tally, and was currently training my second guide dog puppy named Handy. So, the stress of starting the puppy raising journey all over again and Tally’s lack of progress was starting to eat away at my mind.

There were many times where I felt I had not prepared Tally enough for puppy college. And was getting overwhelmed with training a new puppy with a completely different personality than what I was used to. Then one evening my phone rang, “Tally has been career changed, and Guide Dogs was wondering if you would like to adopt her, we can have her come down on the next available puppy truck,” said Ron Chrisman my former club leader.

I remember how it felt like time had stopped, the words that were said stirred emotions that I have yet to truly understand. Tally was career changed, meaning she would not set out to become a guide dog. However, the words that followed left many decisions to be made.

A part of me felt as if I had failed Tally, but in truth it was out of both mine and Tally’s control. Tally was diagnosed with a non lethal medical condition that would result in her to be on medication for the rest of her life. I was then presented with the choice of adopting Tally or giving her to a friend or family member.

This was no difficult choice to act on. My family and I had missed Tally and were eager to welcome her back into our homes. After giving our answer, Tally was scheduled to return home on the next available puppy truck. I had counted down the days until I could see Tally again, and was excited to see how Handy and Tally would interact.

With a wiggly tail and lively body Tally could not physically hold in her excitement and gave my whole family lovable puppy kisses. Handy and Tally hit it off right away and I had nothing to worry about. As months passed, Tally got more adjusted to the new change and soon fell into routine.

Tally will never forget her roots, and to this day still thinks she is a puppy in training. She enjoys being a good big sister to Handy and loves helping in training sessions. Whenever Handy is struggling with a command Tally is always right there to show her how it’s done.

Although Tally’s guide dog journey has ended she now plays the role of a loving pet, big sister, and best friend. It is not about the destination, but the journey. Tally’s destination may have changed but I am happy to say that now she is home, where she receives daily belly rubs, late night cuddles, and the delicious wonders of peanut butter.