Endurance drives the heart of the girls tennis team 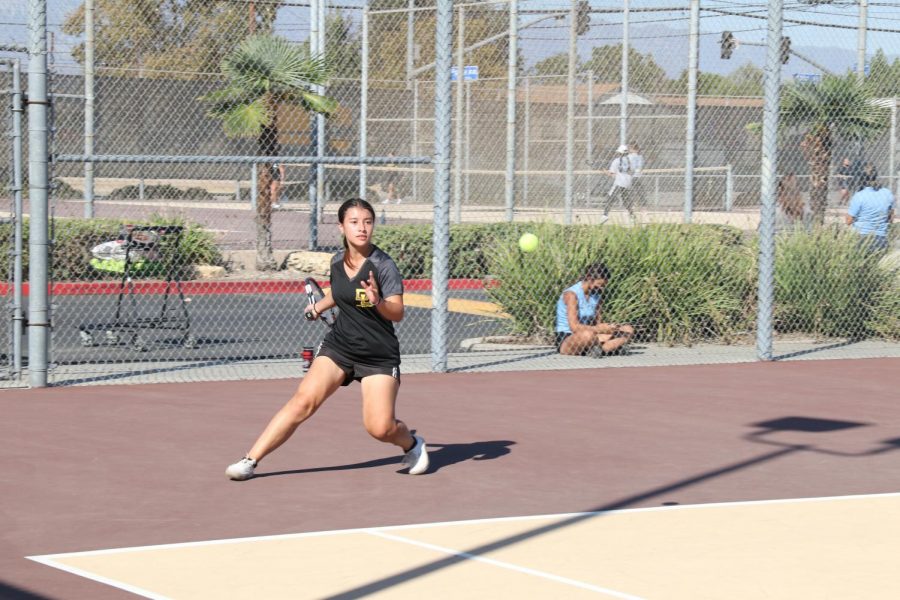 Captain Isabella Angon getting ready to hit a tennis ball to the other side of the court in a match against Montclair. "It's just something about sports that I really love," said Isabella.

Tennis is a demanding sport requiring stamina, energy and agility. Running left, right, up, and backward across the court, trying to hit the ball back to the other side can be tiring. The average tennis match can last anywhere from 45 minutes to an hour and a half.

One of the things that keeps Senior Captain Melanie Espinosa motivated during her matches, is her team. Melanie has played tennis at Don Lugo since her Sophomore year and loves to support her younger players as most of them came to the team without experience. “I will never forget seeing them score their first points during their matches,” said Melanie. She and her whole team are all supportive of each other.

Isabella Angon is the other senior captain for the season. Being a varsity soccer player at Don Lugo has helped her with the running part of the game as it keeps her endurance high.  This is Isabella’s first season playing tennis and she says that having fun is a major part of her game.

“We may not all be winning but we are having fun and that’s all that matters,” said Isabella. Although this winter tennis season has been tough for the team as they have not been as successful as they would like, these student-athletes are having fun and bonding in and outside of the court. The team enjoys the bus rides together to and from their matches, often recording funny videos of each other on Snapchat. The memories of this season are keeping the spirits of these athletes high.

The Girls Tennis team encourages new girls to come out and join their team to be a part of the great memories made both on and off the court. The team has 5 matches left, the next being Thursday, October 7 at home versus Baldwin Park.