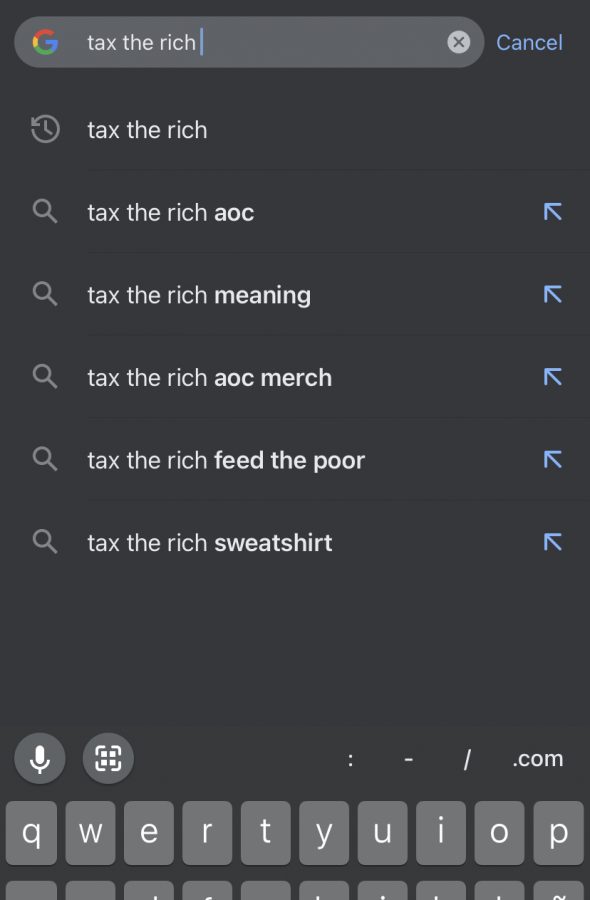 A search of "tax the rich" appears on the Google search engine. Interest in the "tax the rich" slogan has spiked on Google ever since AOC's appearance at the Met Gala. "Machismo plays apart of the mental health stigma surrounding the Hispanic community. I've noticed that with my male cousins, uncles, etc, they aren't allowed to express their emotions as much as females. Also, the majority of hispanics I know, many don't believe in mental illness. Many believe that don't exist because they never experineced it," says Alexandria Ocasio-Cortez.

“Tax the Rich” read the words plastered on the white dress in red, vibrant font. The dress was worn by none other than Alexandria Ocasio-Cortez, U.S. Representative of New York’s 14th congressional district, to the Met Gala on September 13, 2021. Her dress not only sent a statement, but it showed how she is delving into a new era where unconventional mediums can be used to spread political messages to younger audiences; in this case fashion.

The Met Gala, although originally meant to serve as a fundraiser for the Costume Institute of the Metropolitan Museum of Art in New York, has become known as “fashion’s biggest night.” Every year has a theme, and this year’s theme was “In America: A Lexicon of Fashion.” AOC came with the intention of getting people to talk. And she delivered. She not only had major criticism right when she stepped onto the red carpet, but she also did receive praise from her fans or simply those who admire her bold methods of starting a conversation.

The Met Gala could have been something for Ms. Ocasio-Cortez to boycott, being that it is an event where people consume what celebrities and the rich portray through their expensive outfits designed by the luxurious designers. However, she took this opportunity to give a statement, especially to an audience that may not tune in to C-SPAN every day. Her message may have seemed a little out of place given that most in attendance are rich, and the message is directed toward them too, but that is precisely what would make an audience pay that much more attention.

Don Lugo High School students also weighed in what AOC’s statement meant to them. Xiomara Aguilar, grade 12, wrote, “Since our society has been evolving to be more vocal on social and political issues, I was really looking forward to seeing what the rich and wealthy would do when the Met Gala came around. Once I saw that the AOC wore the “tax the rich dress, I was honestly in awe.” Another student, Juan Sierra, grade 12, wrote, “Using the Met Gala event to advocate for not only a political issue, but an issue of human equity, iconizes AOC which has gained media attention, bringing attention to her goal of taking the rich.”

A.O.C. became trending on social media, not only with fashion or celebrity news outlets but also with Millennials to Gen Z commenting or reposting pictures of the famous dress. Google Trends shows that “tax the rich” on Google spiked in interest, more than it has in the past five years. The fact that many people saw Ms. Ocasio-Cortez’s dress and proceeded to look up the phrase “tax the rich” proves that she appealed to an audience that perhaps may not understand the full context of what it means to tax the rich.

And her goal of getting people to talk about taxing the rich makes more sense now that Congress will vote soon on the reconciliation bill. The bill surrounds a $3.5 trillion economic plan which would fund childcare, healthcare, and climate initiatives. What is essential to funding this new plan is tax revenue from higher tax rates directed at corporations and the wealthy.

The wealthy have become more wealthy during the pandemic, meaning that the divide between the ultra-wealthy and the poor is widening substantially. According to one report, the billionaires of the world collectively added $4 trillion to their wealth over the course of the pandemic. Although the rich have benefited from an era that changed the lives of everyone, people not part of the top 1% that already struggled before the pandemic, faced obstacles that were worsened by the pandemic and the shutdown.

Although there have been arguments that AOC could have chosen a wiser slogan to display on her dress, a more specific and pressing issue, choosing “tax the rich” proved to be another strategic move. Although “tax the rich” can be interpreted in different ways, firstly, it is a slogan that the general audience can understand or automatically recognize. As mentioned before, Ocasio-Cortez targeted a wider audience, whose attention she did capture given the evidence of the boom in Google search interest.

Secondly, if AOC had chosen one specific issue, not as broad as “tax the rich,” there still would have been criticism that she could have focused on another specific issue. “Tax the Rich,” in the context of the reconciliation bill, encompasses many issues that Ocasio-Cortez has advocated for before such as the proposition of the Green New Deal. Instead of just plastering every issue she’s passionate about on her dress, she chose a simple phrase that still expands beyond just taxing the rich, but also that tax revenue from raised taxes helps to fund other issues.

Politics may not be the main thing keeping teens up at night, but there is a growing interest in younger generations to be more involved in decisions that directly affect them. The mediums for sharing political messages or advocating for certain issues also have to change in order to grow with the changing times. A.O.C. has become known for using her social media platforms to get her constituents more involved and informed, and for appealing to the younger generation who consume most of their news through social media.

She knows that there is a dawning era of political socialization, one with social media, youth, and even fashion, at the forefront. Her wearing the dress proves just that.