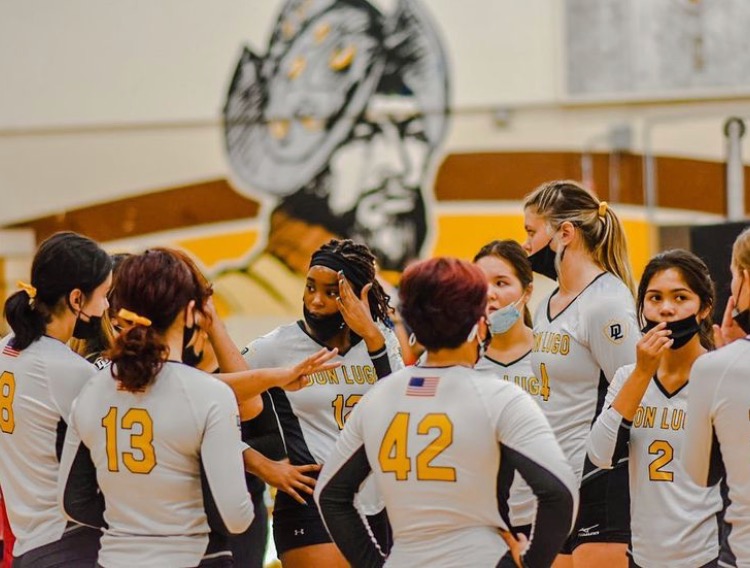 Don Lugo volleyball team huddles to find a solution to finish the game off with a win. This season the girls have been working harder to stay on their feet. "I believe that our volleyball team this year is strong and we have very strong bonds with each other", states Capri Salmon.

Shortly after Covid-19 hit sports were put on the longest suspension of all time! Sports such as football and volleyball were effected which caused a huge draw back in the teams dynamic. With a rocky start at the beginning of the season, volleyball has slowly but surely rebuilt the winning foundation for the start of this year.

With two losses and only one win in pre season, the girls volleyball team was not use to this type of halt in their long before winning streak. Freshman and varsity player, Morgan Graves shares,”The preseason and the start of the season is where the team builds chemistry with one another. It’s very important going into CIFS and League Championships that our team is bonded and our trust is solid to get the job done. The most important thing to success as a team is fluidity on and off the court.” With much hope for league champs and CIF Morgan continues to remind the team that with the right mindset the team can with out a doubt go down with a win.

As the team works diligently to pick up where they had left off from almost two years ago there are still subtle adjustments that are needed. Senior and varsity volleyball captain, Capri Salmon expresses, “Key components our team needs to win are communication and hustle. When we do these two things usually we end up winning.”

So far with the first two wins of league against Baldwin Park and Chaffey high school, Don Lugo volleyball has done nothing but earned their way to the top. Morgan further more expresses,”The last statement I have is to kick butt this season and win CIFS. Let’s play hard, go hard, work on communication on and off the court, and keep a solid winning spirit against all teams.”