OPINION: Don Lugo’s image does not define their students 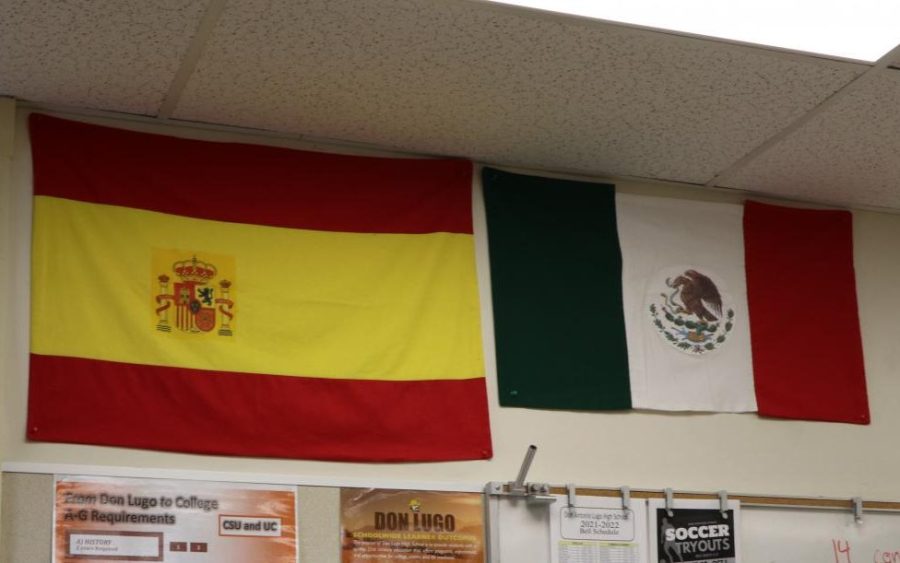 The flags of Spain and Mexico are hung up in one of the Spanish classrooms, Sr. Machuca. A majority of the demographics that make up Don Lugo are Latinx and/or Hispanic.

Don Antonio Lugo High School is the school where kids leave unsuccessful. At least that was the notion I had about my current school before attending. It was one of the stereotypes Don Lugo had, and it just so happened to be my home school after junior high. After considering other high schools in the area, as I know other peers did, I chose to come to Lugo. Although now a senior, I consider it my second home and do not completely believe in that notion, I think it is impactful to have a label or image plastered on a school that represents you.

Though for many students, the act of attending a school that is composed of mainly the disadvantaged minority, has already settled in, the very image of Don Lugo can have a negative effect on a student’s performance.

According to the National Institute of Health, during an important stage of an adolescent’s identity process called immersion-emersion, a person immerses themselves in their ethnic culture while separating themselves from the dominant group. As Thomas E. Fuller Rowell and Stacy N. Doan state, “During this sensitive stage of identity development, minority adolescents tend to react to negative academic stereotypes directed toward their group…” Therefore, although students can be immersed in their ethnic cultures, negative stereotypes, such as Don Lugo’s image can still harm that student. Our school, with 80.8% Hispanic or Latino, has various outlets where students can immerse themselves in their cultures such as the Latino Student Union or the various Spanish Language courses offered here. Though, is it enough? Enough to make students forget that although they can be part of a rich background, there are negative stereotypes against them? Personally, as a Latinx and Hispanic student, I am immersed in my culture as much as I can, but I have always known that being part of the socioeconomically disadvantaged was also a part of me.

The burden of belonging to a label that negatively categorizes you in school and society is not just emotionally draining but plays into real life. I acknowledge that unlike many members of the Latino and Hispanic community, I have not struggled as much. There are stories of poverty, homelessness, single-parent families, working to help pay the bills, taking on household responsibilities. At first glance, one might think these characteristics are typical of belonging to a minority. However, they influence how students do regular things such as going to school. Scenarios such as not being able to get a ride to school, or not having time to finish homework, or be more involved in school due to having to work are just some of the hindering factors to a student’s performance.

Not to mention, attending a school with a large population of disadvantaged students, won’t have the same resources as a school located in a high-income neighborhood, or even a private school. This is a fact, and part of the unchangeable, at least until a systemic solution can be found. However, what is also a fact, is that because of our limited resources, we, as students part of the Latino and disadvantaged communities, need to try even harder to succeed. On the surface level, our test scores won’t show that. On the surface outside observers see that our Math scores for the Smarter Balanced Assessments were 99 points below standard, compared to Ayala High School with 9 points below standard, or Chino Hills High School with 3.8 points below standard. On the other hand, the demographics of Ayala show 27% socioeconomically disadvantaged compared to our 68%. Don Lugo’s test scores don’t illustrate the struggles that our students face to even get nearly to the same level as their privileged counterparts. Although some students want to achieve higher, they have underlying obstacles, or they simply believe they cannot, due to the stereotype labeling what they statistically can or cannot do.

Yet, this aspect of Don Lugo would be fragmented had I not mentioned the efforts put into trying to make our school a path to success with the resources we do have. For example, the social work our formal principal, Dr. Cabrera dedicated to our school, which consisted of addressing the demographics of our school, but also dealing with issues such as homelessness or gang violence. It is appreciated what our staff does for Don Lugo’s students, however, it is also not wrong to acknowledge that our students have a disadvantage and that they deserve better. It is not wrong to defend the students of our school from the stereotypes and images that so poorly portray us. Although young, our students deserve the motivation and effort from their staff and teachers, because if the outside world looks at our school through a negative lens, at least our students won’t be burdened by the people that they see five times a week.

It’s urgent to discuss a big part of what makes this school and my peers who they are. Humans–and adolescents at that–faced with the judgment and the burden of the outside.