The Fall and Rise of Don Lugo Football 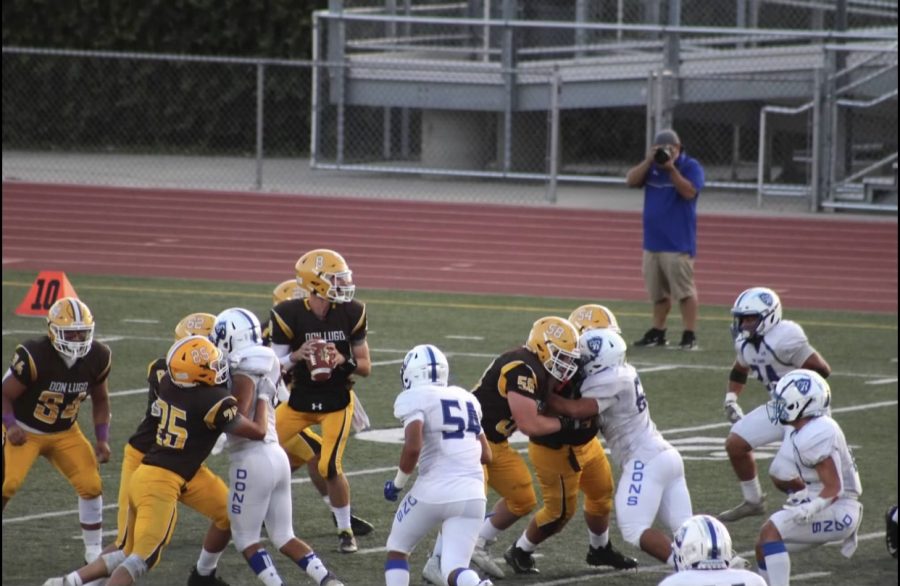 Don Lugo Football facing El Rancho. In the picture Dylan Young is sitting in the pocket during a pass play trying to find someone that is open.

The Don Lugo football team has given up 72 points within two games and did not score at all until last Friday against El Segundo High School. The football team has gotten off to a rocky start for the first three games and are trying to get back on track to make play offs and beat Chino High School in the Milk Can game this upcoming week. With a rough start, there is still a bright future for football and the games that are to come.

Lugo football has also been going through a lot changes, through the off-season and through COVID-19. One big problem was losing an offensive coach four days before their first game and having to study a new play book during that very week. Also, Don Lugo’s head coach retired during the summer resulting in the team having to deal with new authorities and challenges.

The main problem that Don Lugo has is a lack of motivation considering how young the football team is. “The main problem that we [Don Lugo Football] is having is lack of motivation throughout the weight room and on the field because of the rocky start we have had,” said Senior Captain, Luke Kemble. For many of the players on the Varsity team,  it is their first time playing on Varsity since playing for the freshman team last year.

With many games still to play and many things to work on, Luke still has confidence in what they can do.”We need to get out of our own head,” said Luke. He thinks that the main problem that they are having is the mental side of it. To make playoffs this year, they only have to win two league games, but with COVID-19 affecting the season, there are only three league games, which are the last three. “We also face hard teams in higher divisions so when we get to league, we are better prepared for teams that are in our division,” said Luke.

As we know that the mental strain experienced by the team has had a very big impact, physicality is another. With playing teams that are bigger, and in higher divisions, our players need to be very conditioned and spend a lot of time  in the weight room. Luke has stated that players are lacking motivation in the weight room. “I need to do my part as one of the captains to step up when guys are messing around and keep everyone focused on the assignment at hand,” Exclaimed, Luke.

Another big wall that Lugo football is facing is what their community has to say and how it affects them.”Yes I care how our community views our program but I block it out and just remember that it is the game that I love to play and not to let others ruin that for me,” said Luke. With a lot of obstacles in Don Lugo’s Football program, this preseason is helping them grow and work even harder for when they get to league.