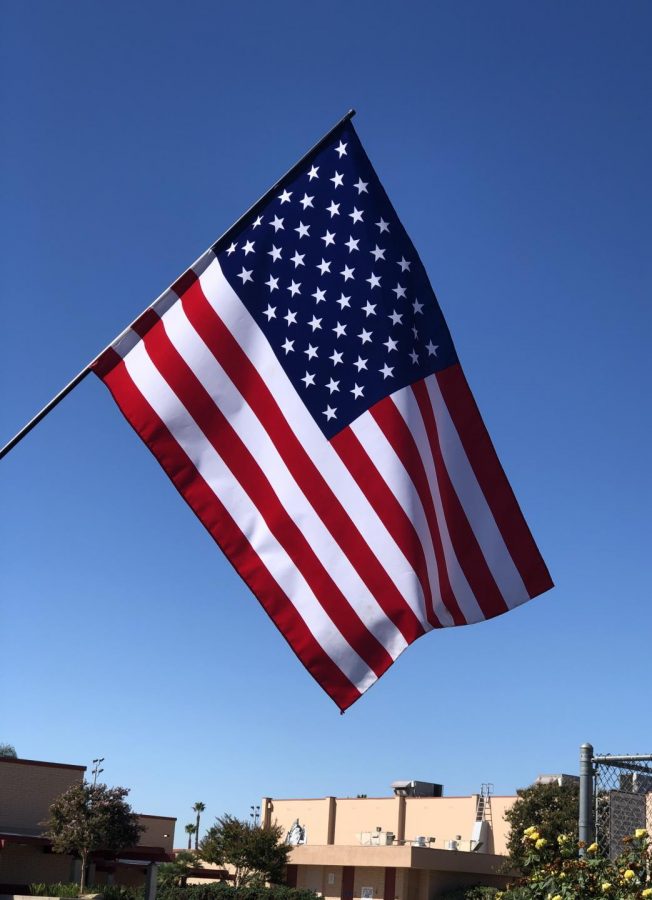 The American flag waving above the Don Lugo campus with clear blue skies behind it. "I saw America stand strong through our Leadership, Armed Services, and the American people coming together with a sense of unspoken understanding and pride of being an American," said Ms. Celaya the Digital Media and Digital Photography Teacher at Don Lugo

The morning of 9/11/2001 began unlike any other, all radio stations broadcasted the news, people huddled around a singular television to watch the terror, families at home desperately called their loved ones, chaos, confusion, and fear was all anybody felt that fateful day.

The deadliest terrorist attack on U.S. soil killed nearly 3,000 people after four airplanes were hijacked by an Islamic terrorist group, al Qaeda. As we come upon the 20th anniversary of 9/11 people can still recount exactly where they were at the time of the attack.

Ms. Celaya, the Digital Media/photography teacher, recounts watching the news and seeing the first twin tower engulfed in flames. At the time, many people did not know if the plane crash was accidental or purposeful. Ms. Celaya continued to watch horror-stricken as the second plane crashed into the second twin tower.

It was then when she knew that the planes were crashed intentionally. The uncertainty of not knowing if more planes were to follow instilled fear and paranoia. “9/11 shattered the security I took for granted every day as an American, and every sound of an airplane overheard was met with fear.”

Many felt that the U.S. was not completely safe anymore. Mr. Garcia, a Don Lugo PE teacher, described the confusion he felt on his way to work after he heard snippets of the news through his broken radio. He walked into the teacher workroom where there were teachers huddled around a small television. He was met with an uncanny sight, airplanes were seen hitting the twin towers.

Mrs. Cortes, a Don Lugo math teacher, was escorted through the pentagon where 189 people died as she visited the memorials and heard the stories of those who were killed. One story was of a General who never took any time off of work. At the time the Pentagon was getting remodeled along with his office, his employees convinced him to go on a vacation with his wife. The plane that crashed into the Pentagon directly hit his office, but he, along with his wife was aboard that same plane. The two died instantly, along with the other 62 people onboard.

Mrs. Cortes described that the benches were angled outwards for the people who died inside the Pentagon, and some benches were pointed towards the Pentagon for those who died on the plane. “It’s chilling to see because sometimes you hear numbers but our brains can’t quantify them, but when you see every individual bench representing somebody that was killed is when reality sets in,” she says.

The last and final plane missed its original target because the passengers revolted and forced the hijackers to crash into an open field in Shanksville, Pennsylvania. Despite the crash being the last attack, the U.S. took precautionary measures and canceled all flights. This was the first time the U.S. had ever had clear skies without a single plane flying overhead.

All flights were canceled for a week and then they only allowed domestic carriers to fly. On the morning of 9/11, Mrs. Marshes’s husband was on a business trip to Holland and was still in the air while the attacks were happening. Soon after he had landed he called her to let her know that he was safe. Due to the cancelation of flights, it would be days before she could see her husband again.

Mrs. Tillet first heard of the news on the radio and was in disbelief but she quickly became worrisome. After arriving at work she called her husband to try and get a hold of her brother-in-law and uncle. They both worked for the military and were often at the Pentagon. Eventually, she found out they were both out of harm’s way and were not at the Pentagon that morning. The next few days would be challenging for Mrs. Tillet because both her mother and father, a retired United Airlines Ramp Manager, were stuck in Hawaii at the time and could not fly back home.

Those are just a few of the many memories of that unforgettable morning and there are so many more that are waiting to be shared. Don Lugo students should reach out to loved ones and learn the deeper significance of 9/11, for it was a day that will never be forgotten..