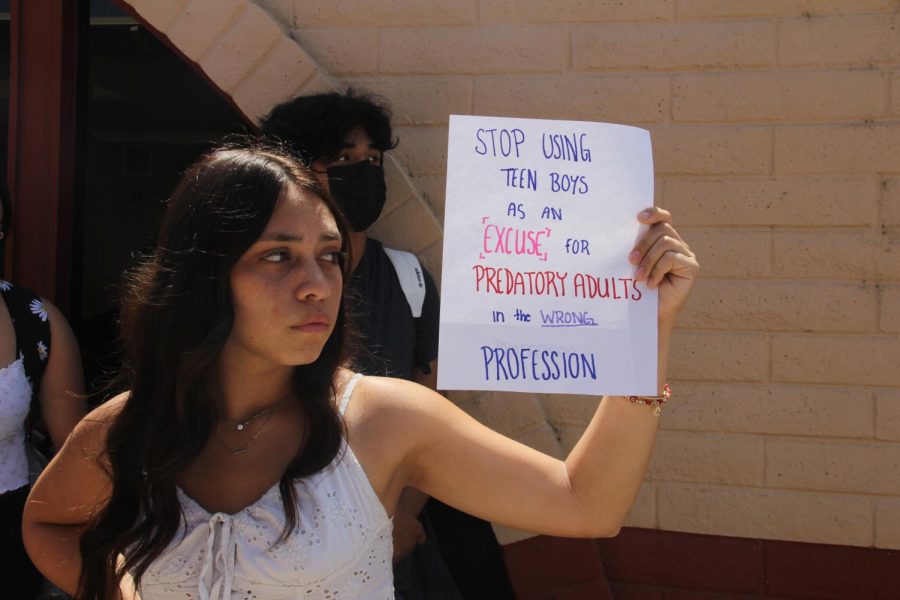 Giamae Villalobos stands in front of the counselors office holding a protest sign. "If you're worried about girls clothing being distracting you should be more worried about who you're hiring," she said.

High school dress codes have been labeled “outdated,” “sexist,” and “sizeist,” protests are happening all over the country and the students of Don Lugo are no exception.

Two Don Lugo students, Elizabeth Saldana and Giamae Villalobos, were involved in both protests and spoke at the CVUSD board meeting.

The dress code has been a controversial subject on many high school campuses between both students and school personnel. Saldana said there seems to be a lot of preconceived assumptions on what they want to revise in the dress code. The assumption she said she hears the most is that she and the other protesters want to put an end to the dress code altogether, which is far from the truth.

“There are a lot of things that I agree with but there are some things that need to change because they are outdated,” Saldana said.

Three Don Lugo students stand in the front of the counseling office protesting the dress code. “I have a right as an American citizen to peacefully protest,” Elizabeth Saldana said. “It’s in the first Amendment and that’s exactly what I did.”(Photo Courtesy: Natalya Gonzalez)

Sizeism is defined in the Oxford dictionary as “prejudice or discrimination on a person’s size or weight.” Saldana describes the dress code as “sizeist” because it disproportionately affects bigger girls. Saldana said bigger girls are more likely to be dress coded despite them wearing the same exact shirt that is fitted for their own body.

She said the dress code is discriminatory toward women because it “targets feminine students,” and hinders their education because “students will be pulled out of class, humiliated in class, degraded, and sexualized while other students of other genders continue learning.”

Saldana said her sister had a similar experience when she was scolded in front of her class because of her bra straps showing. She was then dress-coded and forced to wear a sweater with no shirt on despite asking to put the sweater on over her shirt. The staff made no compromises and were more focused on bra straps than the comfort of the student.

These students are protesting to demand an end to the sexism, sexualization, and sizeism that they believe is deeply rooted in the dress code which disproportionately affects young women.

Giamae Villalobos said she prioritizes the importance of not blaming, punishing, or telling female students what to wear but instead educating the staff and male students on respecting young women despite what they are wearing.

“What we should be concerned about is the boy’s behavior,” Villalobos said. “You’re looking too closely at what these female students are wearing at school rather than teaching these boys how to act right.”