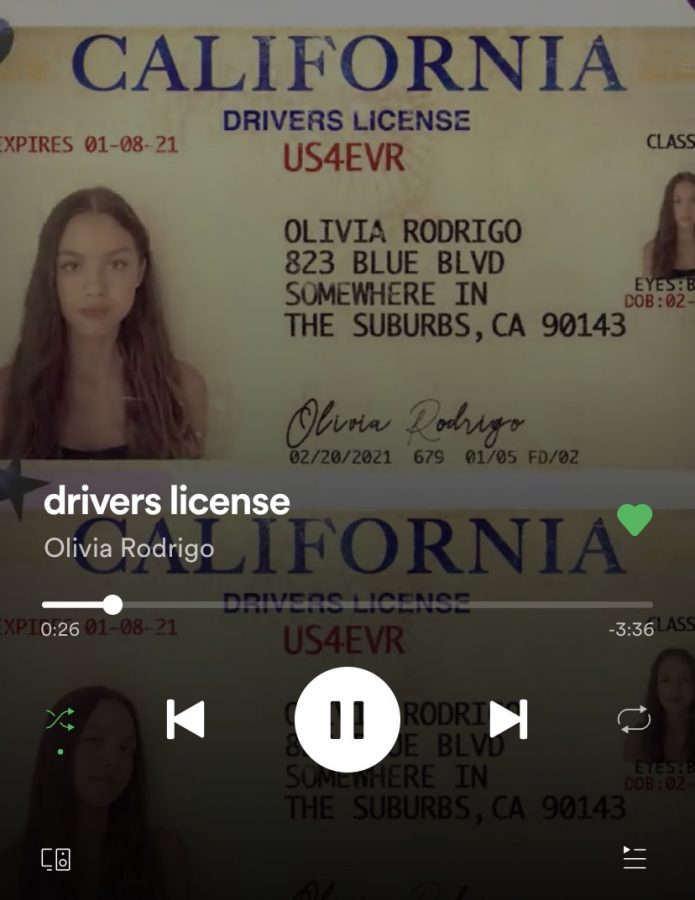 Olivia Rodrigo's song "drivers license" plays on the Spotify app. Since it's release, many teens have streamed the song.

Drivers License is the song many zoomers are putting on full volume in their rooms while they scream the lyrics. The single released by Olivia Rodrigo, singer, and star on Disney’s High School the Musical: The Musical: The Series, reached #1 on multiple charts. It gained popularity quickly, especially among Generation Z. The song’s teen-heartbreak theme gives Generation Z, and myself, the opportunity to release all my emotions with no shame during this especially difficult time.

The song is rooted around Rodrigo’s experience getting her driver’s license, going through a heartbreak, and driving past her ex-lover’s street. The 17-year old revealed on her Instagram that she recently got her driver’s license, which is seen as a right of passage that many teenagers can relate to. This paired with the common high school heartbreak was the perfect combination to reel in a large Generation Z following.

The song not only gained praises from many big names including Taylor Swift, Halsey, and Cardi B, but it went viral on TikTok. 1.4 million videos were posted with the drivers license sound. The themes of the videos range from people recording themselves making covers to the song, recreating scenes from her music video, or Generation Z discussing how they can relate to this song so well. The ballad’s piano-filled instrumental and mid to high pitched vocals have every component for a song to make anyone feel emotional, even if they don’t relate to every lyric in the song. The impact of this song is so strong among Generation Z that they feel comfortable sharing their emotions on social media. It connects us all despite having been on lockdown for almost a year.

Olivia Rodrigo may just be another teenager forced to quarantine, but what she created was not only a song that everyone can belt out, but a reminder that music continues to be the safe space for Generation Z to express their emotions. Even if it is just us alone in our rooms, laying in bed with headphones in, staring at the ceiling with the LED lights on.