Opinion: Looking back at Trump’s Presidency 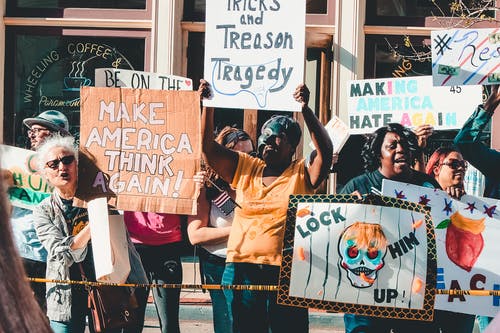 For four years America has been under the thumb of possibly on of the worst president’s of U.S. history. Donald Trump has forever changed how the world will see America, and has left an impact that will be incredibly difficult to reverse. Over the years journalists everywhere, including myself, have covered the bizarre presidency of Trump, and now at the official end of his term and the beginning weeks of President Biden’s presidency, I’d say it’s a good time to reflect on what exactly he has done.
Campaign year, 2016
Even before Trump’s inauguration in 2017, he campaigned off of his infamous slogan “Build That Wall,” which he had claimed would remedy the growing number of illegal immigrants coming into America. In reality he used immigrants to strike fear into Americans, and then to in turn deem himself their savior. To be specific, he said, “They [Mexico] are not our friend, believe me,” before moving on to speak of Mexican immigrants as a whole, “They’re bringing drugs. They’re bringing crime. They’re rapists. And some, I assume, are good people.”

Not only is this completely false, because undocumented immigrants  statistically cause a significant decrease in violent crime in the areas the immigrate to, it is also a textbook case of fear mongering. By striking the fear of Mexican and other Hispanic immigrants into his supporters, he convinced them that he would be the only person capable of protecting America.

This kind of rhetoric grew into a divide amongst different races and ethnicities, and a statistically proven surge of hate crimes amongst counties that had the most Trump supporters. This means, Trump’s hateful words and fear mongering encouraged his supporters to act on their pre-existing racial biases to the point where media contributors began to coin the phrase, The Trump Effect.

But hey, at least he was kind enough to acknowledge that some Mexican immigrants are good people.
Year One, 2017
Trump didn’t exactly soothe any concerns that left leaning voters had about his presidency when he was almost immediately accused of being involved in a scandal with Russia to help sway the outcome of the election in his favor. It also didn’t help that he fired the FBI director leading the investigation against him, and although the stifled investigation managed to commence under Robert Muller, it certainly didn’t make him look innocent.

His ability to cause racial divide continued from election year, but in the form of multiple travel ban executive orders. First he signed an order banning Syrian refugees and citizens from seven other largely Muslim countries from entering America for 90 days, and then he signed another similar order into action at the end of the 90 days. He also issued restrictions on visas, rightfully outraging countless Muslim American citizens.

He also announced that he was ending DACA, a program began by Obama to give temporary citizenship to kids brought across the border by their parents, and attacked NFL players kneeling as a form of peaceful protest against police brutality. If he is remembered for anything, let it be how he managed to make nearly every minority group feel unwelcomed in their own country in only his first term.

To contrast that, he acknowledged the protests at Charlottesville by saying, “there are very fine people on both sides.” If by “fine people” he means violent white nationalists then I guess he’d be right.
Year Two, 2018
Trump’s failure in 2018 is undeniable. In the first month he shut down the entire government for three days, because Senate wouldn’t give him the money he wanted to build the border wall he promised his supporters. Then he shutdown the government again for a few hours the next month, and then for the third time in December all for the same reason.

This decision was nothing but reckless and petty. Government employees were working without pay for days just to keep the county afoot while the President complained he wasn’t given enough money to build his completely ineffective and unrealistic border wall.

So while many more things happened this year, the three government shutdowns represent Trump’s 2018 term pretty well.
Year 3, 2019
Trump’s impact on America has began to become more long lasting as the years went on. Under his administration over 100 climate change acts were rolled back, including the U.S. getting pulled out of The Paris Climate Accord, which is something that will affect us long after Trump is gone.

In the 2019 fiscal year, 30,000 refugees were admitted in the country, a record low. Although he kept his promise of not admitting more immigrants into the U.S., he did it at the expense of people who were trying to legally flee their war-torn countries.
Year 4, 2020
Trump managed to end his presidency in one of the most catastrophic terms in history in 2020. He was impeached twice, once for obstructing congress and abusing his power, and then again for causing an insurrection at the Capitol Building to overturn the results of a lawful election.

He handled a global pandemic so poorly that 26.8 million people in America have caught COVID-19 and 459K people have died all because he convinced the public it was a hoax for months. Which brings to to the fact that even with Trump out of office, the lies he drilled into the head of his supporters for four years will plague America even after he’s gone.

He’s managed to create a false reality where elections are stolen and COVID isn’t a real issue for the people who support him. It will take time and resilience for America to undo the damage he’s done.

Because while Trump has managed to do a few good things in his Presidency, nothing will outshine all the pain and division he has subjected America to. If you can honestly, in good spirits, believe that Trump is the best president America has had, you’ve had the privilege of not being one of the many minority and marginalized groups that have been made to feel unwanted in this country.

We may have new President now but as aforementioned, the damage that Trump has caused America will be difficult to reverse.