From training pads to puppy college: The journey of a puppy raiser 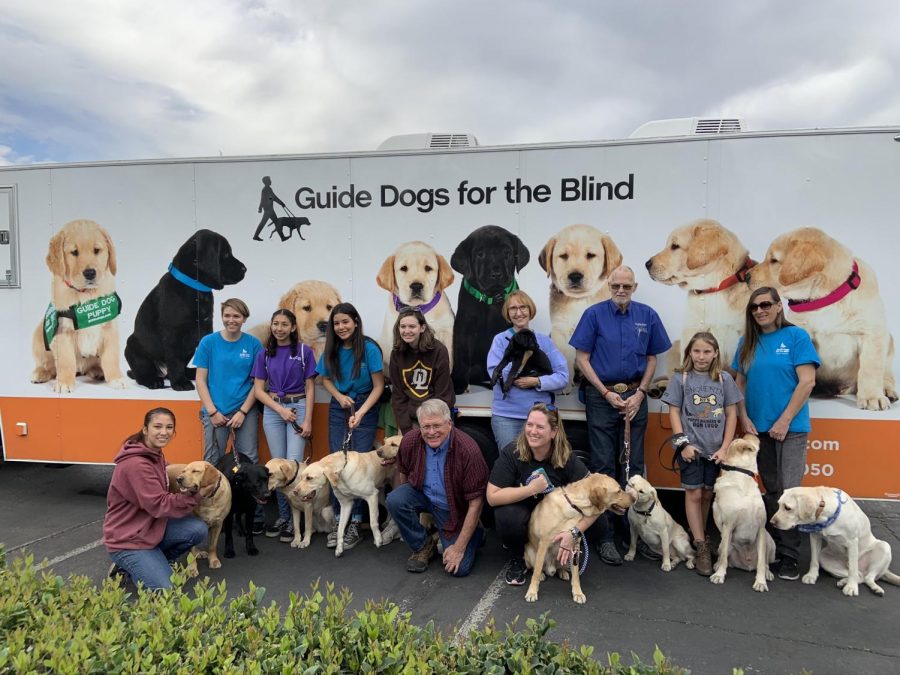 Guide Dogs For the Blind puppy trainers take picture in front of departure truck as the dogs are being sent to training in San Rafael, California. Each puppy will be evaluated within the course of a few months on their effectiveness of being a guide dog and take on tasks in real-life situations that people who are blind will encounter.

I opened the front gate emitting a subtle squeaking sound and walked down the stone pathway that would lead to my first guide dog puppy. Anticipation filled me. All that I could hear was a mixture of whines and panting coming from multiple puppies huddled together. I gazed at the three puppies, and my heart stopped. Thoughts flooded my head, and I was so eager to find out which one I would be raising. Our club leader, Ron Chrisman welcomed us and announced he would now give us our assigned puppy to raise along with their name.

I have always been a huge animal lover, and when I found out Don Lugo had a program that allowed students to raise and train puppies that could potentially become guide dogs, I knew I could not miss out on this opportunity. The club consists of volunteers known as puppy raisers who work towards the goal of raising and training dogs who can hopefully one day become somebody’s eyes, all through the Guide Dogs for the Blind organization (GDB).

As a freshman at the time, I was pretty nervous and worried if I was experienced enough to train a puppy at such a young age. However, after months of going to club meetings and working with the dogs on campus I became more comfortable with the idea of training a puppy and my confidence grew. My love for dogs and passion for training them was a huge motivator throughout this journey.

Ron had carried over a small, female, yellow lab whose coat appeared a darker golden tone and rolls of baby fat collected at the base of his arms. It was at that moment that I was presented with my ten week old guide dog puppy, Tally.

Witnessing the growth Tally went through empowered me to want to continue working through any hurdles, until I knew she was at her fullest potential that I can get her to. My job as a puppy raiser, was to teach her basic commands such as sit, down, stand, stay, come, and wait. As well as, to socialize her and get her used to the outside world by taking her to restaurants, stores, movie theaters, and exposing her to different environments.

This was not an easy task. Every dog has their own personality and it really shines through the more you work them. Tally had a very strong, sassy personality which oftentimes made training difficult. She was quite stubborn at times, and would send me dirty looks when I asked her to perform a specific command. At first, I thought it was in my head, until multiple people pointed out that she had “mad-dogged” me. Nonetheless, she would still perform the command but would be very dramatic while doing so. For example, there were times where I would give her the command, “down” and she would comply, only after sending me a side- eye and laying down dramatically.

Months went on, and Tally continued to mature. She outgrew her “rebellious” stage and was always so eager to do training sessions with me. Tally started reaching the point where she would be ready for recall, meaning she would go back to San

Tally had one last final evaluation which would determine if she would get recalled or not. This evaluation was at the Montclair Mall, so I was a bit nervous considering it was at such a large setting, but I had confidence in Tally and knew she would do great. One of the biggest challenges I spent the most time with Tally on, was her dog distractions. It is crucial that our dogs are not distracted by anything that could steer them off of performing their task at hand, including other dogs. After long hours of setting up dog distractions for Tally, the hard work paid off when we encountered an excitable pup in the Barnes and Noble. To my surprise, Tally completely ignored the dog and performed exactly as she was supposed to. Once the evaluation was over, I sighed a breath of relief knowing Tally had done an amazing job, and would progress onto the next chapter in her life.

The bitter sweet day had come, after a year and a half of always having Tally by my side, she was off to San Rafael to begin training. Loading her onto the puppy truck was one of the hardest things I have ever had to do. It would be impossible to not get attached to her lovable personality, which oftentimes made me question if she was even a dog. Tears clouded my vision as the truck drove off, allowing her to take the next step in her journey. One that I would not be a part of, but instead cheer her on from the sidelines.

Although Tally’s chapter with me came to an end, she still has a long way to go until she is ready to tackle the challenge of becoming a guide dog. GDB does an amazing job of preparing qualified dogs to guide blind or visually imparied people. As shown in the Disney+ documentary, Pick of the Litter, these dogs go through extensive training. From showing them the basics of guiding, to teaching them the importance of disobeying their handler when presented with a dangerous situation. Only those who are able to pass all 8 phases of training will become guides. Pick of the Litter walks through the entire process these guide dogs go through up until they are matched with their very own blind or visually imparied person.

I continue to root Tally on everyday in hopes that she will be able to make a difference in an individual’s life. Become their eyes, and grant them more freedom in life, and knowing I contributed to that makes the entire journey worth it.