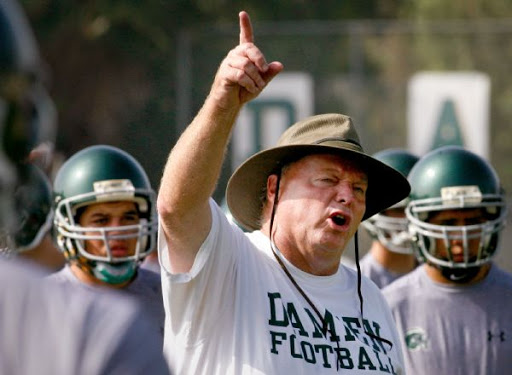 Greg Gano, a long term sports coach, arrived at Don Lugo high school in 2015. Coach Gano has been coaching football for many years and has gone to a variety of different schools over time. Forming Don Lugo into a better football program by increasing our division rank overall.

During his High School years Gano showed interest in Coaching sports stating, “his head coach at West Covina High School impacted my life a lot.”  ” ” Being shown what coaches can do for the kids, inspired him to want to do the same.

While pursuing his dream he coached little league, baseball, pony league  adapting to those skills. The job came natural to Gano, ” I knew the game and in my first year coaching in high school we were 0-10″- he wanted to advance so “he figured out to learn to block and tackle, I wanted to get fancy instead of good.” After learning from his mistakes he states “we reversed what we were doing and then good things had happened.”

Coach Gano continued his career at Don Lugo after leaving Wilson High School and winning four CIF Championships at Los Altos High School, “the kids were great and I enjoyed my time there.”  Initially Coach Gano interviewed for Ayla High School but then heard about a position that was opening up at Don Lugo High School.  One of the interviews had told the AD Joe Marcos that “he had a guy that was a very good coach and would love to take the job.” One morning Joe had called Coach Gano stating that they were looking for a coach, Gano had responded with “Okay I am the guy.” Coach Gano had found out that Dr. Cabrera was the principle and he had coached at Los Altos where Dr. Cabrera had gone to high school. Gano had known her dad because he would go to Los Altos and walk around with his granddaughter. Him knowing many people within the school and additionally his knowledge in Football had helped him get the job.

Gano was earned success through out his career using his knowledge of sports. Proven through the numerous schools he’s worked at, to include
West Covina High School, South Hills High School, North View High School and Damien High School. The work he has put in and the  kids he has impacted through his career has highlighted his achievements. He not only has improved the game but he has also dedicated time to students in good team building and in their confidence.