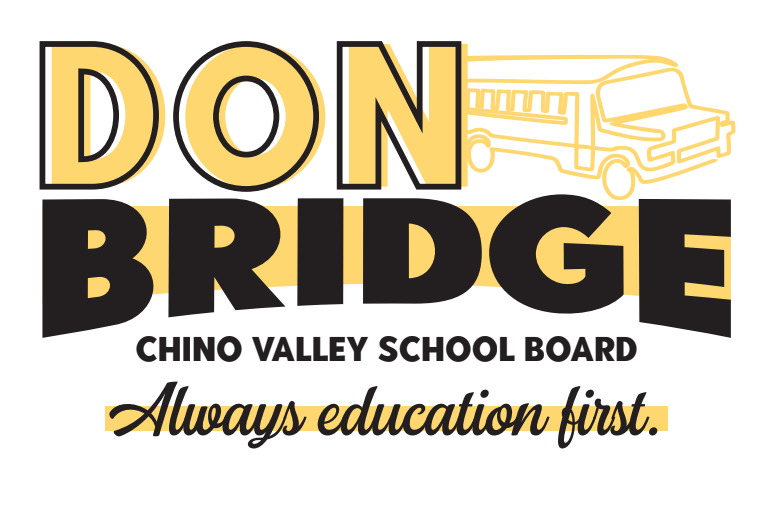 Don Bridge's campaign logo in running for Chino Valley School Board. "My campaign goal was just trying to show that I have the experience to understand this district."

In the midst of one of the craziest presidential elections in our generation, Chino Valley  Andrew Cruz and James Na are re-elected to the CVUSD board, as well as, newly elected Don Bridge, as one of the new board trustees.

With an eight candidate race, Don Bridge came in at a close second place in votes with 16,254 behind James Na’s 17,504. Andrew Cruz finished in third with 14,890 votes. Don Bridge is a CVUSD veteran with 33 years of teaching experience in the classroom at Don Lugo and Ayala high school. Don Bridge was the candidate choice for CVUSD educators. Donald Bridge mentions, “My greatest strength of achieving this position is in depth knowledge of the entire school district from the classrooms, school sites, district office, and familiarity with the administration.”

Bridge has represented the Associated Chino Teachers in various leadership positions including ACT President for four years and a member of the executive board, who advocates for the students and teachers for the access of resources for quality education in the Chino Valley Unified School District. He believes that with his knowledge of the school board system that he’s gained in the past years can provide big help with other CVUSD board members in the decision-making and reinstating bringing school back to campuses in the near future of this school year.

His mission statement is to simply make Chino Valley relevant again to where people want to work here and students want to learn here. With plenty of staff and parents advocating for his beliefs and works, Don Bridge is someone with experience in this district that can continue to make his mark by making the district better.