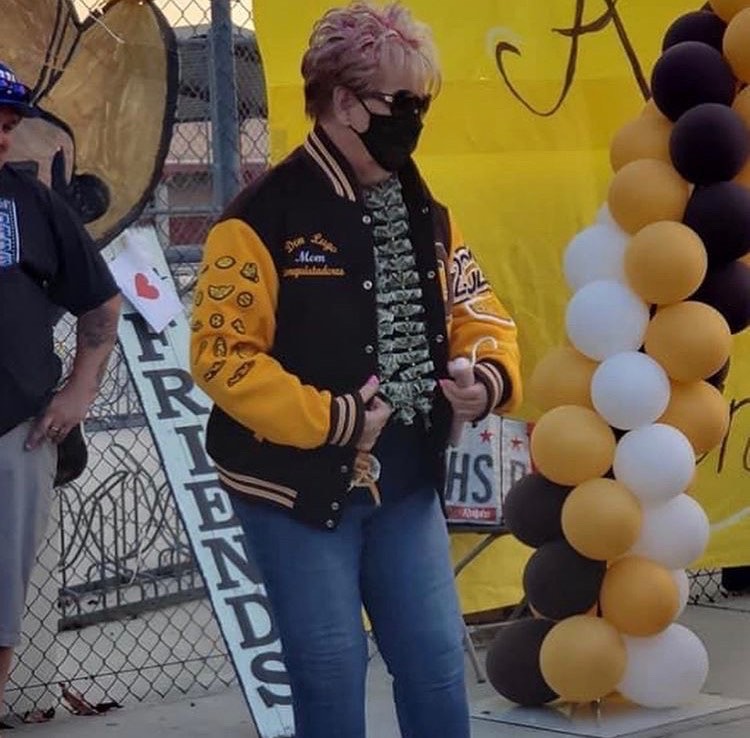 Mrs. Hensley at her retirement drive by parade. She proudly wears her new Don Lugo letterman jacket that was gifted to her. "I haven't done as much for Lugo as it has done for me!" Photo courtesy of...

After 19 years of working at Don Lugo Mrs. Hensley, also fondly known as “Grandma” by many, has retired from teaching. She started at Lugo back in 2001, was substitute for special needs students in 2003, and in 2005 she was officially hired to join the Lugo staff. Ever since then she has proudly flaunted her school spirits and says, “How could I not have Lugo pride, it was so awesome being one school, one family.”

On October 7 Don Lugo held a retirement car parade for Mrs. Hensley in the student parking area. Cars of friends, family, and students were lined up waiting to congratulate her and say goodbye. People gave her flowers and gifts as a token of appreciation for everything she has done for Don Lugo.

Mrs. Hensley did not only make an impact as a special needs teacher but also as an assistant cheer advisor. Senior varsity cheer captain, Brooklyn Franco, explains that she appreciates Mrs. Hensley because she, “Has been such a role model and literally like my actual Grandma.” Brooklyn also shares that “Grandma has been there for me through my toughest times and my most happiest times. I can appreciate everything she has done for me and the cheer team.”

Being assistant coach of the cheer team, she was always full of energy and spirit at game nights, especially Friday Night Lights for football. Often from the bleachers you’d hear students shouting hello to Grandma as she waved back enthusiastically from the field. One of varsity football’s team captains, Cristopher Ramirez, notes that, “She played a big role in Lugo spirit because she always wore her Lugo gear, cheered us on, motivated, and inspired us to keep doing what we loved.”

JT Cortinas, also a varsity football captain, mentions that, “Even though we were having a losing season she would always say something to bring our spirit up.” He, along with many others, greatly appreciates how much she cares for students and supports them.

Possibly the most telling of Lugo’s love for Mrs. Hensley is the loving nickname “Grandma” she is called by majority of students. The name stuck with her from when she had 8 grandkids attend and graduate from Don Lugo; eventually the name evolved and almost everyone close to her called her “Grandma.” She stated how the nickname is “a beautiful term of endearment and I was blessed to be honored with it!”

With her retirement she reminisces the old times and shares her favorite memory being the class of 1980 and winning the CIF championship in football. Mrs. Hensley will be missed on campus and will always be a Don Lugo conquistador. She plans on coming back to visit so she can still be involved at Don Lugo, “Especially when the students return and Sports are back!”