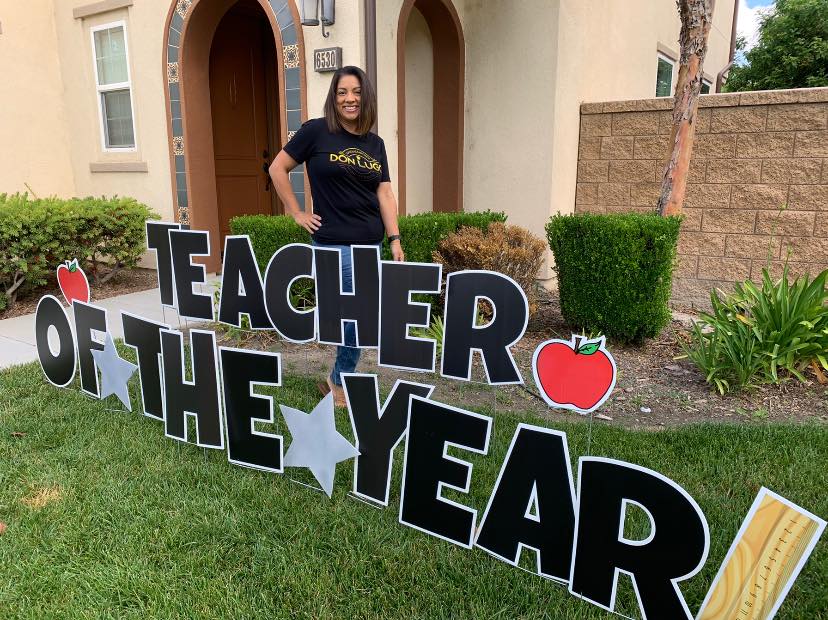 2019-2020 Secondary Teacher of the Year, Mrs. Annette Deming, stands proudly in her Don Lugo staff shirt. "I'm so excited and honored to represent Don Lugo." Mrs. Deming is being recognized in a virtual celebration by the Associated Chino Teachers on May 13.

This year’s Secondary Teacher of the Year was rightfully awarded to Don Lugo’s very own Annette Deming. Deming was recognized by the Associated Chino Teacher’s Union (ACT) for her passion and determination as an educator, and everyone who knows her can attest that this was a well deserved honor.

Debi Woolery, our Don Lugo Speech and Language Pathologist, was the one to recommend Mrs. Deming for the award. When asked why she nominated Mrs. Deming, she simply said, “I nominated her because she is an amazing teacher.” In Mrs. Woolery’s nomination she included some of the events and achievements that Deming has made possible for her students. These include; Quest News’ Student Press Freedom Day event, having the first student to ever write for The Chino Champion, Theatre’s Lip Sync Battle, Fall play, and Children’s Theatre which was innovatively performed in the form of a Read Aloud due to COVID-19.

Teachers that have worked with Mrs. Deming also understand completely why she was chosen to be a recipient of the district wide award. Dr. Julian Rodriguez, Director of Secondary Curriculum for Chino Valley Unified (CVUSD), was once Mrs. Deming’s Master Teacher while she was still a student teacher at Diamond Bar High School. According to him most student teachers need a few weeks before they can really handle the classroom on their own, “NOT Mrs. Deming, I could’ve easily handed over my class to her by the end of the first couple of weeks!” Dr. Rodriguez also recognizes Mrs. Deming as a passionate educator that is actively seeking opportunities to provide for her students and someone who sets a good example for those she teaches.

Ms. Dominguez, an AVID and English teacher at Don Lugo, is most inspired by how Mrs. Deming never says something is “good enough.” She is constantly trying to better herself and her student’s, and that effort is very clearly reflected in all the achievement she has given them the opportunity to earn.

So while these teacher’s can see very clearly why Deming deserves to be honored for her passion and dedication, nobody appreciates Mrs. Deming’s hard work more than the student’s that have spent time in the classroom with her.

Because Mrs. Deming has so many programs, she’s managed to make major impacts on a large number of students. Saslaya Baca, a junior who’s had classes with Deming for all three years of high school spanning from Theatre to Quest News to English, shares that the most influential thing Mrs. Deming has done for her, is simply believing in her. Saslaya is one of next year’s Thespian Officers, and fondly shares that she would have never made it to that position if Mrs. Deming didn’t bring Saslaya out of her shell. “When she believes you can do something she’ll let you know but also make it clear that it comes from your will too, she’s one of the most understanding and passionate teachers I’ve met.”

Edward Lillie, a senior that has been with Deming for all four years of high school with theatre and a year and a half with Quest News, expressed that Mrs. Deming is more than a teacher to him. To Edward, Mrs. Deming is a mentor to go to when you need advice or reassurance that you’re on the right track. Because of her, Edward is inspired to become better at his craft and take any opportunities that come his way.

Andreia Sales, a senior who has been in Advanced Theatre for three years, said Mrs. Deming is the reason she’s found her passion in life. Before joining theatre, acting was just a hobby to Andreia, but after meeting Deming and experiencing the opportunities she’s created for the Drama department, Andreia will be attending Cal State Fullerton to pursue Theatre as a career.

Quest News’ Editor in Chief, Anthony Winslow, admires how easily Mrs. Deming connects with her students as well as her willingness to help her students succeed. This sentiment is shared by Angela Gutierrez, who believes that as soon as Mrs. Deming walks in a room, everyone’s faces immediately fill with smiles.

Gary Garcia admits that he was wary when first walking into Mrs. Deming’s English class, but that she became his favorite teacher almost immediately. He felt such a close connection with Deming that he signed up for Journalism to be able to stay with her another year, and in the process has found a passion for writing that he didn’t know he had. Now, he plans to pursue journalism if he doesn’t end up with a football career.

Mrs. Deming’s impact spans beyond the walls of Don Lugo, considering she is still considered a role model to many alumni. Anthony Romero (Class of 2019) says Mrs. Deming pushed him in his senior year and was by his side for the two years he had her. She was there for him when he was struggling as a Quest News Editor-in-Chief, and is a major reason he’s gotten to where he is today. “I am truly grateful to have Mrs. Deming in my life. She made a huge impact and I’m proud of her!”

Natalie West (Class of 2018) fondly refers to Mrs. Deming as a mother figure to a lot of Lugo students. Deming has changed many lives, and Natalie’s is included. “She taught me how to work hard and own it! No faking it until you make it. Deming taught me to be fearless and I’ve seen her build up some amazing theatre and journalism kids!”

Now as for me, after having spent three years with Deming (going on four), I can truly and wholeheartedly say that I am so grateful I signed up for Quest News my freshman year. I’ve always known that I wanted to be a writer, but that dream didn’t seem like it could become a reality until I met Deming. She taught me to believe in myself, and helped me realize that I can and should pursue my dream career. Freshman me would never believe that one day I’d be published in the LA Times or win awards on the national level, but Deming has made these things possible for me and for that I am forever thankful.

So to Mrs. Deming, thank you for all that you do for Don Lugo.