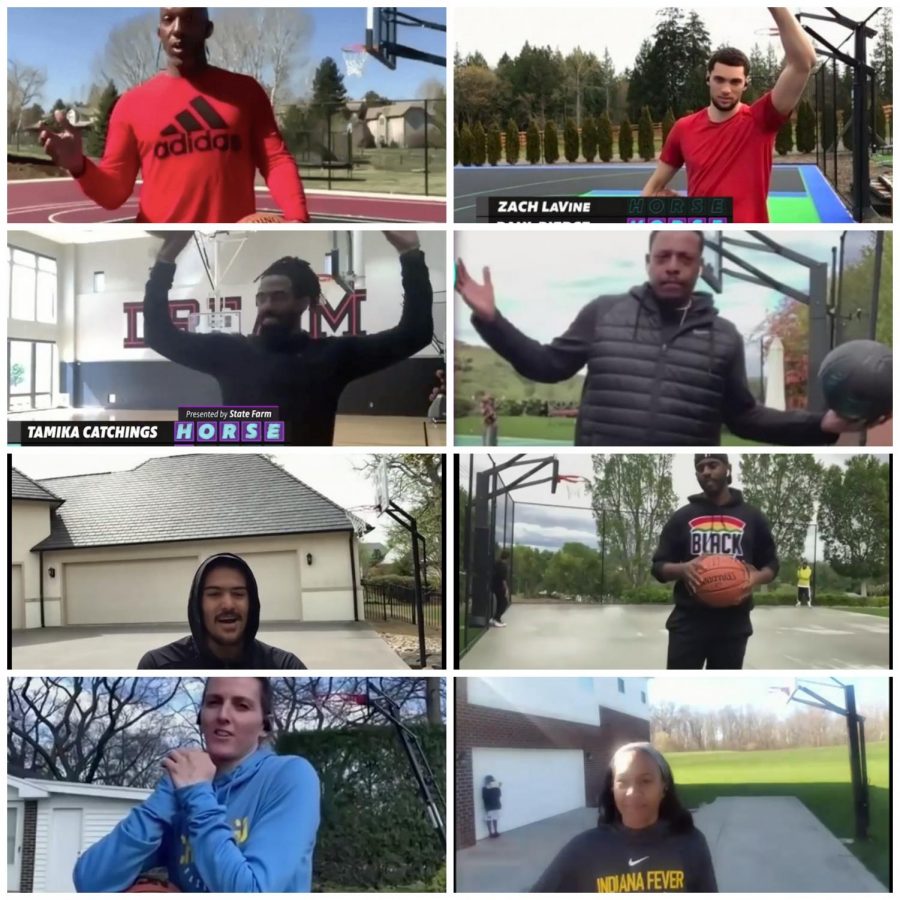 All 8 contestants of the NBA H.O.R.S.E. tournament get together on live camera as they shoot their shots.

With the pandemic of Covid-19, the virus has made everything in its path come to a halt. All sports have come to a complete stop, historic and iconic games are being televised again on tv. However, some sports are holding special virtual events to entertain fans of sports as they sit at home during quarantine.

The NBA was the first major sport to suspend its season due to Covid-19. The NBA who has already hosted a live NBA 2k video game tournament, is now hosting a HORSE game between NBA players of the past and present along with WNBA players. The players involved are Chauncey Billups, Trae Young, Mike Conley, Tamika Catchings, Chris Paul, and Allie Quigley.

The HORSE challenge is not only to entertain the sports hungry fans, but State Farm is planning to donate more than $200,000 on behalf of the participants to charities focused on coronavirus response efforts. Day 1 of the challenge was already held on Sunday,  April 12.The contest was held from each player’s isolated home courts over live video feed.

Chauncey Billups came out on top to defeat Trae Young. Mike Conley beat Tamika Catchings in his advantage of his at home gym which holds an indoor basketball court. Chris Paul hit the shot of the night, but was upset by Allie Quingley. Zach Lavine who is known for his unbelievable dunks and athleticism took down Paul Pierce.

Allie Quigley who has the second to worst odds of advancing beat Chris Paul and is now looking to face Zach Lavine as they both play professional basketball in Chicago. This leaves Mike Conley and Chauncey Billups to face off against each other in the semifinals. The event will be able to be watched on ESPN as well as the ESPN app on Thursday, April 16 at 9pm ET.

The finals of this competition is still yet to be decided on when it will take place, but the results will be much awaited as this is one of the scarce sporting events being held at this time.