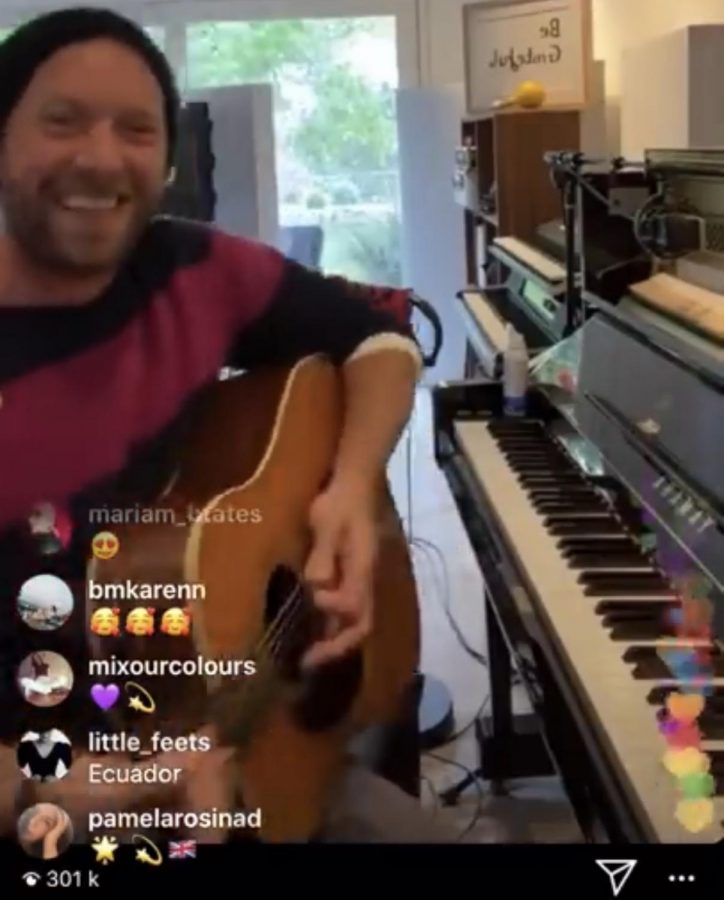 Virtual concerts allow fans to watch their favorite artists perform live in the comfort of their own homes. Lead singer and co-founder of the band Coldplay, Chris Martin Went live on instagram and performed some of the band's songs. "Together at home."

For the past couple of weeks, artist after artist have cancelled and postponed their performances and tour dates in order to slow the spreading of COVID-19. While this is positive in keeping the public healthy and safe, it’s also caused a plunge in moral amongst the fans that had planned on attending those dates. However, some artists have begun to combine the best of both worlds by sharing the experience of a live performance through their social medias. Being indoors for 3 weeks or longer is not music to anyone’s ears but with the help of these artists, quarantine is becoming a little more bearable.

Live streaming concerts through Youtube, Instagram and other digital platforms has become many artists way to makeup for cancelled dates and help provide some entertainment during this stressful time. Artists like Miley Cyrus, Diplo, Niall Horan, Tori Kelly, and many more have gone live and performed some of their songs in front of thousands of viewers. Some artists didn’t exactly perform songs but rather talked with their fans to provide some encouraging words during self-quarantine. Essentially, artists are making an effort to reach out to their fans and this sentiment is clearly appreciated, considering each performance is gaining thousands of viewers.

Virtual concerts not only provide entertainment for the viewers who tune in but also to the artists themselves. Swae Lee, a rapper and composer, performed a free virtual concert where he sang songs, brought a fan ‘on stage’ which was basically him inviting a viewer to join his live video, and he even stage dived into the ‘crowd’ or the floor in his case. All of the performers who decide to go live try to make it a fun experience for everyone.

Some of the live streams are free for anyone who decides to tune in while others are partnering with organizations to raise money towards finding a cure for COVID-19. Social distancing has clearly made artists think in a creative manner to interact with fans and technology has made it simple. It’s important that there’s some form of positivity during this tough time, and artists have found a creative way to provide that to their fans.