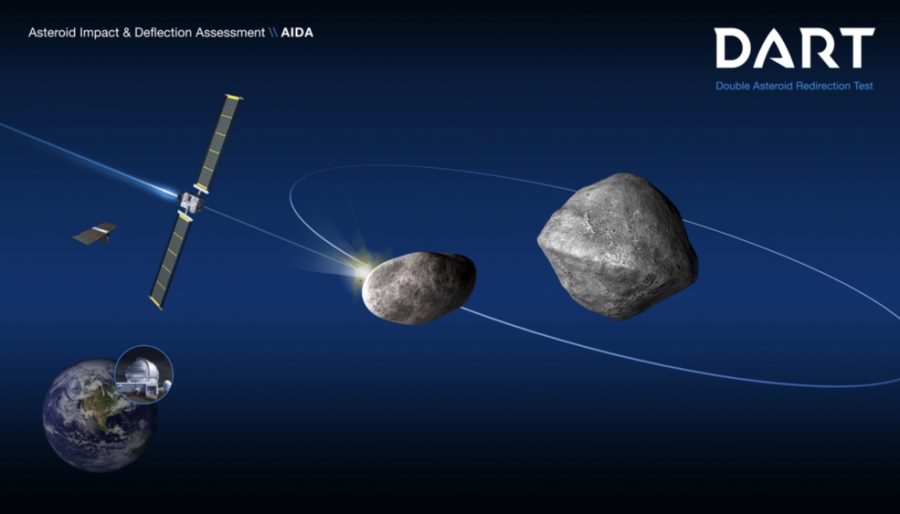 Schematic of the DART mission shows the impact on the moonlet of asteroid (65803) Didymos. Post-impact observations from Earth-based optical telescopes and planetary radar would, in turn, measure the change in the moonlet’s orbit about the parent body.

Asteroids have existed in our solar system ever since its birth 4.6 billion years ago. Only until recently, has life evolved and taken hold of our planet, but life is fragile and susceptible to large amounts of change over the century, asteroids being one of them. In the year 2029, where the asteroid is known as 99942 Apophis, a speed of 67,000 miles per hour, is expected to make a flyby of Earth on April 13, 2029, and will come so close to the Earth that it will pass below the orbits of some geosynchronous satellites and will be visible from both rural and suburban areas.

MIT scientists explain that the asteroid would come so close to our planet’s gravity it would alter the trajectory of the asteroid. If the asteroid hits the Earth, either in the Pacific Ocean, North Atlantic, or North America, we are talking about the massive destruction of localized and inhabited land around a 100,000 km area and would have long-lasting effects on our planet as well as the global climate. This would effectively plunge our planet into an impact-induced winter, causing crop failure, and blocking sunlight from reaching the surface, killing off most surface life, but NASA has been hard at work these past six months developing a “planet-killer” asteroid deflection plan.

From MIT to NASA, several possible asteroid deflection ideas have been proposed. MIT scientists proposed sending a “scout” first to “gain specific measurements of the asteroid or two scouts: one to measure the asteroid and the other to push it slightly off course before a large projectile can be used to ensure it misses Earth. While the craziest idea proposed by NASA, is to paint one side of the asteroid white, then use the sun as a sort of sail to change the asteroids orbit slightly so that Apophis won’t hit the Earth in 2036, NASA is currently planning the Double Asteroid Redirection Test or (DART) for short.

The Double Asteroid Redirection Test (DART) mission is directed by NASA to the Applied Physics Laboratory (APL) with support from several NASA centers:  the Jet Propulsion Laboratory (JPL), Goddard Space Flight Center (GSFC), Johnson Space Center (JSC), Glenn Research Center (GRC), and Langley Research Center (LRC). “DART is a planetary defense-driven test of technologies for preventing an impact of Earth by a hazardous asteroid…and will be the first demonstration of the kinetic impactor technique to change the motion of an asteroid in space,” according to NASA.

The goal of the DART mission is to study the effects of an asteroid impact by deliberately crashing into the binary near-Earth object known as 65803 Didymos, in order to change its speed.  “By deliberately crashing itself into the moonlet at a speed of approximately 6.6 km/s, with the aid of an onboard camera (named DRACO) and sophisticated autonomous navigation software, the collision will change the speed of the moonlet in its orbit around the main body by a fraction of one percent, but this will change the orbital period of the moonlet by several minutes – enough to be observed and measured using telescopes on Earth,” explained NASA officials.

Currently, the DART mission is scheduled to take place in the year 2021. NASA stated that, “the mission will be scheduled to impact the moon of 65803 Didymos in October 2022.”

With this breakthrough in planetary defense from near-Earth objects, NASA will help further our understanding of the effects of asteroid impacts and how we can deflect these objects from ever hitting the Earth and causing a potential mass extinction. It is clear that NASA is making sure our species does not go down in a blaze of glory like the Dinosaurs.