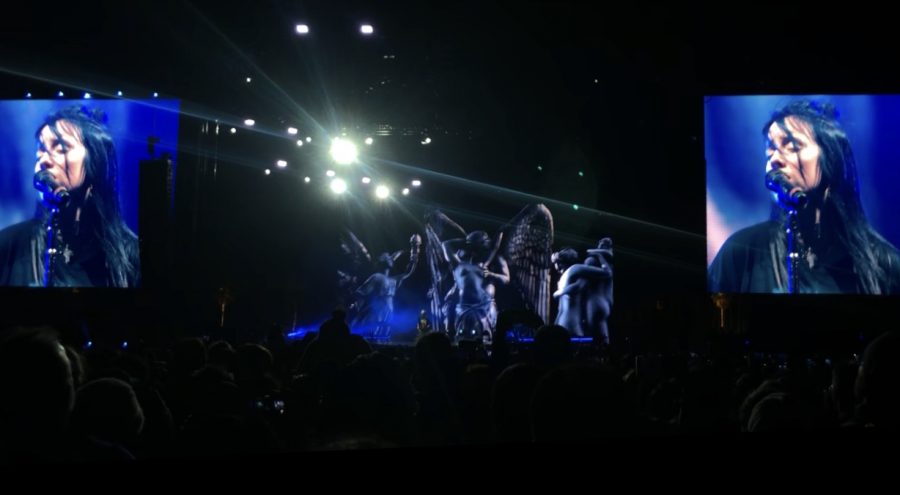 Recently on her new world tour, Billie Eilish took a stand against body shaming. Billie Eilish performs at a concert in April 2019. "So while I feel your stares, your disapproval, or your sigh of relief, if I lived by them, I'd never be able to move." (Billie Eilish)

One well-known aspect of pop star Billie Eilish is her unique style, especially her oversized, baggy clothes. Recently, at her first world tour stop in Miami, she projected a video to her fans where she took off her shirt and eventually ended up in her bra. This video was meant to address body shaming and was accompanied by a recording of her speaking her mind on the topic, and she did an amazing job.

Her speech that played alongside the video of her peeling her shirt off added to the powerful message that her fans received that night. Billie Eilish clearly got her point across regarding the pressure young women are faced with in the music industry and her method of presenting that definitely grabbed the attention of many. This was especially surprising to many since the main reason Billie Eilish wears baggy clothing is to avoid being sexualized, so when she revealed her body on a big screen it was enough to shock the public and spark conversation.

In the words of The National Association of Anorexia Nervosa and Associated Disorders, a non-profit organization, body shaming is criticizing one’s own appearance or the appearance of others. In her speech, Billie Eilish states “Some people hate what I wear, some people praise it, some people use it to shame others, some people use it to shame me, but I feel you watching, always, and nothing I do goes unseen.” She expressed that no matter what she wears, she is still subject to the public’s criticism and judgement, proven time and time again by the media buzz her outfits generate.

Her presentation of the subject was unique and unexpected due to her obvious refusal to show her body in the past, which made it all the more powerful. Women in big businesses are constantly targeted and scrutinized since they are directly in the public eye. By making this unpredictable video alongside the speech, Eilish effectively addresses the media’s sexualization and criticism of women in the industry.