Ric’Diculous’ Rodriguez; the culture behind the art 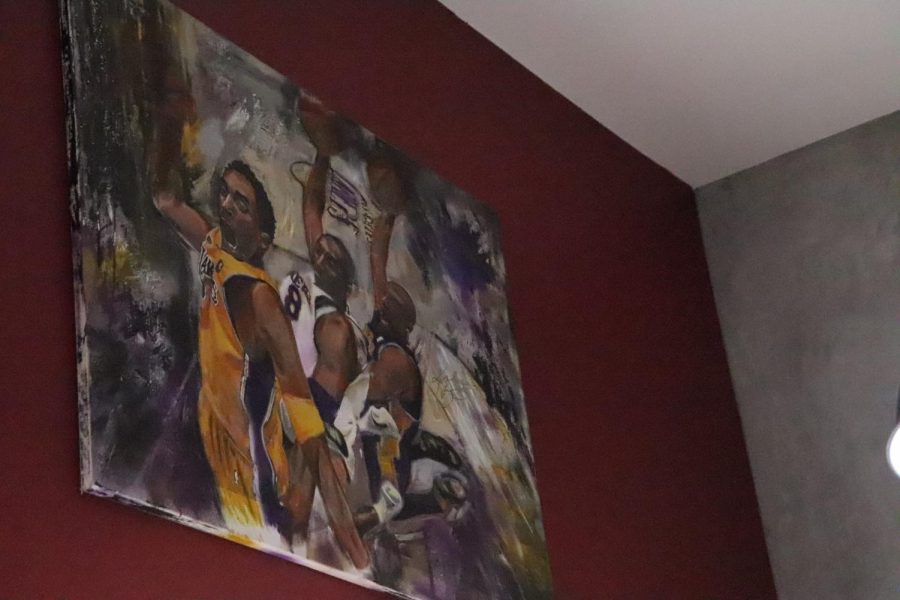 Painting Kobe Bryant in all stages of his career as he goes for dunk.

The point of art is to insight emotion in the viewer, and Ric Rodriguez does that through painting some of the most influential people in the lives of young LA residents– legends that represent the City of Angels.

On Saturday, February 29, Ric’Diculous’ held a solo art show in the heart of West Hollywood where he showcased some of his pieces. Upon entering the barbershop where he fittingly held his gallery, the first thing we couldn’t help but notice was the loud rap music played by a DJ in the corner, the amount of people who were socializing, and the overall atmosphere of the event immediately set the tone of the event as a ode to the Hip-Hop culture that is LA.

The barbershop was a surprising parallel to the typical white-walled art gallery, and was as much a contributor in creating the ambiance of LA as Ric’s paintings were. The barbershop chairs served as displays for the work, another creative and unique alternative to the typical frames. But despite the help of the well picked venue and unique displays, the paintings had no trouble with embodying the city on their own. With Pieces dedicated to Nipsey Hussle, 2Pac, Eazy-E, The Lakers and more, there was no doubt that Ric held a spot in his heart for the legends of Los Angeles.

Often times the true culture of LA isn’t represented in mainstream art and media, and instead replaced by the disingenuous and sensationalized works of “conventional” media. But, SoCal and LA residents can’t connect to that art because it doesn’t depict what is important to them. Ric’s composition of art, culture, and legends that hold a place in the heart of Angelinos perfectly materializes what LA truly is to those who actually live there.

Ric shared that, although attending college with the plans to work in PR, art had always been where his passion lied. Ric used his passion to create art for LA residents that encapsulated the culture and aura of the city; one way he did this was through his unique mediums. At first glance, his paintings seem like exceptional portraits of influential stars. However, the further you examine the paintings, magazine clippings, pieces of cardboard, and lifted paint are all layered into the painting to give it a unique texture. Somehow, Ric manages to make his art look like it were spray painted directly on a wall in the streets of LA, rather than a canvas.

The amount of love Ric feels for his city is evident in his art, as well as the stories behind each painting. Ric shared that he created his portraits of Kobe Bryant to give to grieving fans at The Staples Center, where thousands of Angelinos gathered to mourn the late Los Angeles Lakers legend.He also makes the influence the streets of LA have on the creation of his work clear, sharing that he walks around Los Angeles picking up clippings of magazines and newspapers that inspire him, later incorporating them into his pieces.

To Ric, it’s very important that Los Angeles is depicted genuinely in art and emphasizes how important it is that high schoolers in the city don’t let stereotypes affect their dreams to become artists, “It’s more about knowing you and knowing yourself.” So although the Hip- Hop culture of LA is not currently depicted in media, Ric’Diculous’ is an extremely talented artist hoping to change that– one piece at a time.