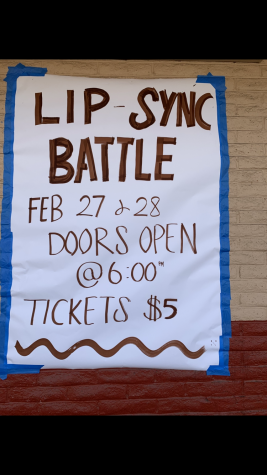 Curtains Closed, stage is set, the sound of the audience whispering and talking amongst themselves in the background. Eddie Lillie walks out on to the stage with a clipboard in his hand and a look of excitement evident on his face. He introduces the instructions of the lip sync battle along with the teams that are playing and the judges, adding in comedic banter that sets the playful mood for the night.

After Eddie introduces each judge, he would give a brief demonstration of what the judges should be looking for. With each mini performance, Eddie incorporated a different element of what the judges are expecting, and by his final performance, he’s in a tight corset with water raining down on him while lip-syncing Rihanna’s Umbrella. If that opening number didn’t set the standard for the amazing show to come, I don’t know what would have.

Then the lights fade back in and Eddie calls out to each team captain and introduces them as they stand near a gigantic colorful wheel, “Today our team captains are Andreia, Mya, and Angelina.” They hold a rock, paper, scissors battle to see who goes first, and Mya comes out on top, so she spins the wheel first to decide the first category each group must perform in.

Everyone in the audience chants,” SPIN. THAT. WHEEL!” and the game begins.

The first category was “Songs of the Decade” which consisted of songs from 2009 to 2019 that were number one for over 7 weeks. People talked amongst each other as the stage was being set and then, all of a sudden the lights turned off and the curtains opened and the sound of Kesha’s hit song Tik Tok filled the MPR. The next two teams picked the Black Eyed Peas’ Boom Boom Pow, and Bruno Mars’ Uptown Funk that truly brought the songs to life on stage. The crowd engagement was amazing as the crowd laughed and cheered on the performers.

Round one was over and the next spin landed on “Judges Choice” which is a category judges choose themselves. The judges deliberated for a bit with a bit of input from the crowd behind them. They ended up choosing “We Love Boy Bands” and one of the Judges, Mrs. Tillet, mentions the boy band “Albondigas” which was another judges, Mr. Swift’s band when he was younger. New kids on the block chimes in, and the first act of the second round is underway. Within the rounds the judges have an argument about why there isn’t a girl bands group and judge Lemen says, “l just want to hear some sweet sweet tunes.”

The next team played the intro to Big Time Rush which amused more of the younger crowd. The round ended and the next round of “divas” was up. The teams played songs from Britney Spears and Beyónce, which after the Britney Spears act Eddie reminisced about the time he performed Britney Spears in front of the whole school at lunch in his sophomore year.

The Lip Sync Battle then headed into a 15 minute intermission and then when the intermission ended, the ranking of the teams were announced: Angelina’s team was in third, Mya’s team was in second, and Andreia’s team was in first. The next category was “King of Pop” as the judges were asked what their favorite Michael Jackson song was while the actors were getting ready.

Mya’s team played “Bad” and at the end of the act their Micheal Jackson, Gavin ended with doing the splits as the crowd applauded before the curtains could even close. Angelina’s team came up after they lip synced to “Beat it” and one harsh feedback was “I’ve seen more movement in a dishwasher” as Mr. Grebel spoke. Not all the feedback was harsh though, they were all meant with their own type of love and affection.

The next round was “Deming’s playlist” which is where each team can pick a song from Mrs. Deming’s playlist who is the choreographer for the Lip Sync Battle. Teams filled the role of Mrs. Deming being a student and a teacher while also using one of the songs she actually listens to and likes. The songs were from the 80’s to the 90’s to the 2010’s.

The last category of the night was “OK Boomer” which is songs that came out in the 50’s and 60 because of “baby boomers” which is a term the internet uses for the babies born after world war 2 or near that time. The songs played were “Barbie Girl” “Hey Mickey” and “Livin La Vida Loca.” All the songs ended their show out with a bang from salsa dancing to a giant pink prop car and girls dancing in Lei’s.

After the last act there was a special appearance from the 2019 class that recently graduated and they performed their own lip sync with the help of another guest star, Johnathan Deming, who is Mrs. Deming’s youngest son. After the performance there was a curtain call where the actors were called up with each of their class such as seniors, juniors, sophomores, and freshman. The seniors stood in front of the stage with their caps and gowns and they hugged each other.

The actors then sat with their team as the standings were announced. In third place was Angelina’s team. In second place was Mya’s team. In FIRST PLACE was Andreia’s team!

Each team put their heart into the Lip Sync Battle along with the host Eddie and the choreographer Mrs. Deming. It was only the first night so there is still more to come and more to look forward to in the second night, and last night.