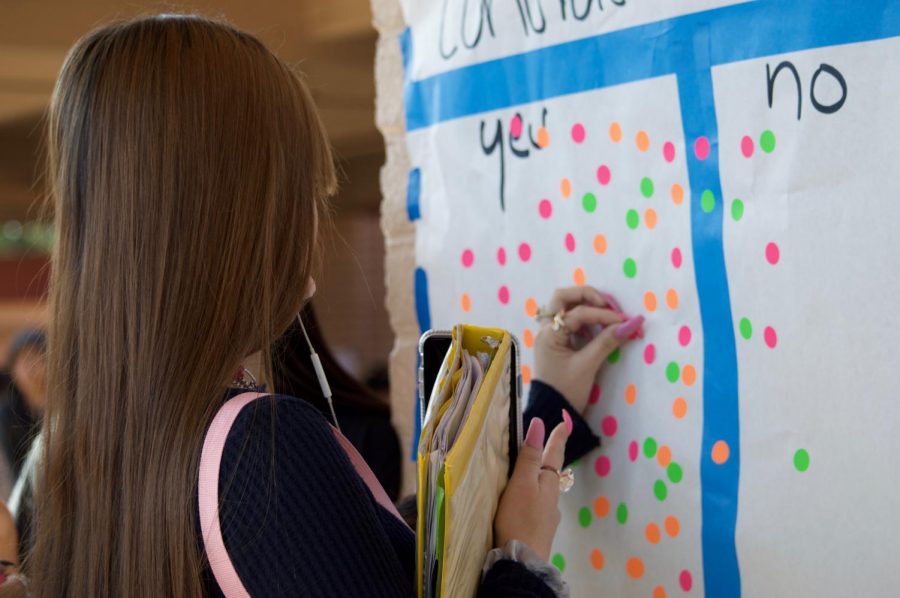 On January 29, Don Lugo students all around campus had a chance to divert their attention to Student Press Freedom Day because of the controversial issues posted all around the quad. This student is proudly voting yes for the topic "Should graffiti be considered art?" This event was a remarkable opportunity for students and staff to have their voices be heard.

There was an overwhelming amount of students who voted on the controversial questions that come with a successful Student Press Freedom Day event.  On January 29, the Quest News student reporters gave the students of Don Lugo a voice by asking them to vote on nine thought provoking questions that yielded interesting results. The Student Press Law Center explains that Student Press Freedom Day is “…a national day of action when we celebrate the contributions of student journalists and highlight the need to support their independence without censorship or threat to their advisers.”

Quest News gave the entire school the opportunity to voice their opinions with controversial questions that included topics such as, “Should athletics money be distributed evenly, Should transgender people be allowed to serve in the army, and Should graffiti be considered art?”   As students rotated from poster to poster in the middle of the quad, students rushed to give their vote, while others even sparked lighthearted debates with their friends. The event garnered outstanding participation with a total of 1,179 votes collected.

The most divided question was, “Can art be separated from the artist,” although it had the least votes, with 103 total.  Students were torn on the issue as 45% voted yes, while 54% voted no.  The least divided question among students was, “Does the dress code affect girls more than boys,” with an overwhelming 93% yes vote to a measly 7% vote no over 125 total votes. But voting on controversial issues was just one way Quest News reporters engaged students in the awareness of Student Press Freedom Day.

In front of the Associated Student Body office, was a handmade 11 x 3.5 foot poster of a world map recreated by the Quest News staff as a replica from the Newseum exhibit in Washington DC. The poster represented where the press is free around the world.  The poster showed all of the countries that have a complete free press, partial free press, or no free press. Anthony Winslow, Quest News Editor-in-chief, pointed out, “I think students needed to understand the privilege they have in a country that offers them a free press, while not all countries have that right.”

The two-month project idea came from Adviser Annette Deming who revealed, “When I attended the Washington DC National Journalism Education Fall Conference in November, I had the opportunity to visit the Newseum one last time before it closed for good. They had a Press Freedom exhibit that offered visitors from all over the world an opportunity to have a voice. I thought it would be a great exhibit to bring back to Don Lugo.”

Students loved voting on issues that may not be discussed in a typical class, evidenced by the massive amount of responses given.  Quest News hopes to make the celebration of Student Press Freedom Day a yearly event on campus.