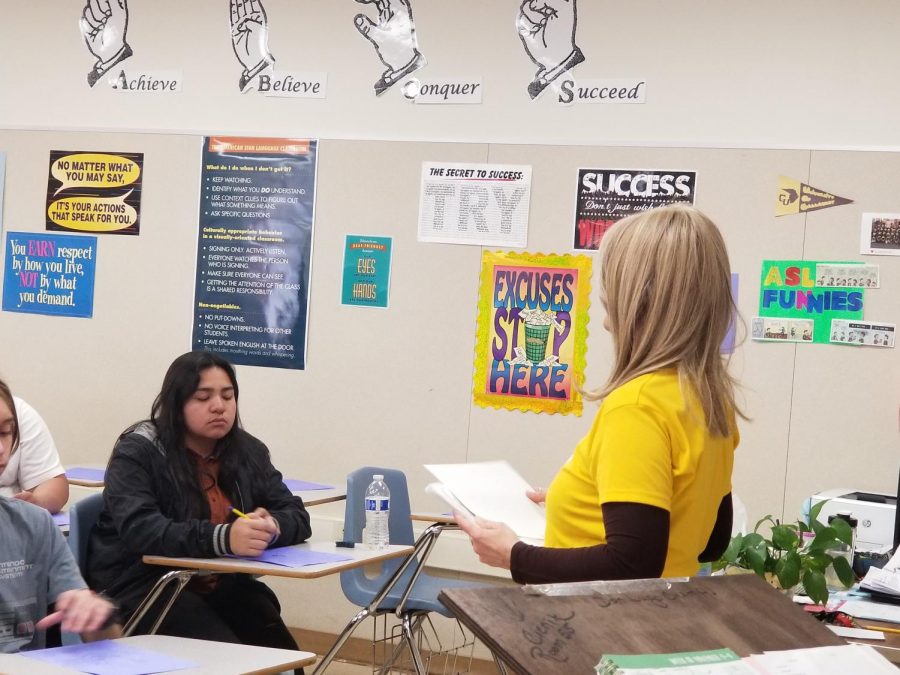 Mrs. Cenik has to constantly stand in the front of the class so that her students can easily see her signs.

When life knocks you down, you get back up. Mrs. Cenik feels this statement down to her very bones. Her students understand that she expects them to try their absolute best and push through their problems. In her classroom, she constantly tells her students who are unsure of their answers or work, to try. The best thing someone can do in her classroom is try.

Teaching high school was never Mrs. Cenik’s dream. She had taught Adult Ed as well as English previously, which also was not her choice. Her friend had to  twist her arm into getting the job, as well as another one who had her teach in a high school. That’s when she fell in love with the job. Her family was shocked at the fact, she expressed, “When I graduated I said, ‘I never want to even touch the property of a high school again!'” After high school she went on to attend Gallaudet BA University in Washington DC and majored in Psychology, then online classes with MA National University. However, her potential was highly underestimated prior to her teaching.

In high school she was placed in vocational classes, as no truly academic classes were offered to her due to her deafness. When she expressed to her counselors she wanted to go to college, they laughed. When asked what the most challenging part of her school life was, she explained it was communication. “For me growing up? No interpreter, I was alone, I was the only deaf person in that whole school.”

The high school’s expectations for her were not very high, and the capability of socializing with her fellow students was near to impossible, but there was one who showed faith. “One of the home ec teachers really believed in me… and that’s when I began to understand, I could do anything I wanted to and it really had an impact on me.” Mrs. Cenik’s students believe she tries her best to make an impact on her students like her home ec teacher had on her.

Now, as the school’s sign language teacher, Mrs. Cenik cares deeply about each and every one of her students and understands their differences. That is why she assigns each student a name sign after a period of time. A name sign is a way to sign a person’s name quickly, instead of fingerspelling all of it.

Name signs are made from one’s personality traits, facial features, or background. One of her students, Scott, questioned why she gave him a name sign in front of her eye which started as an O then turned into a C. Her response, “Because your eyes get so big!” Scott explained when he is shocked by something his eyes widen drastically in response. A name sign is strongly apart of deaf culture and only a deaf person can assign them, which makes it really special for her students when they are given one.

Mrs. Cenik describes witnessing her students grow and learn as, “Music to my eyes.” Her enthusiasm shows just how much she truly cares about them.  Just as she was inspired all those years ago, she hopes to inspire her students now.