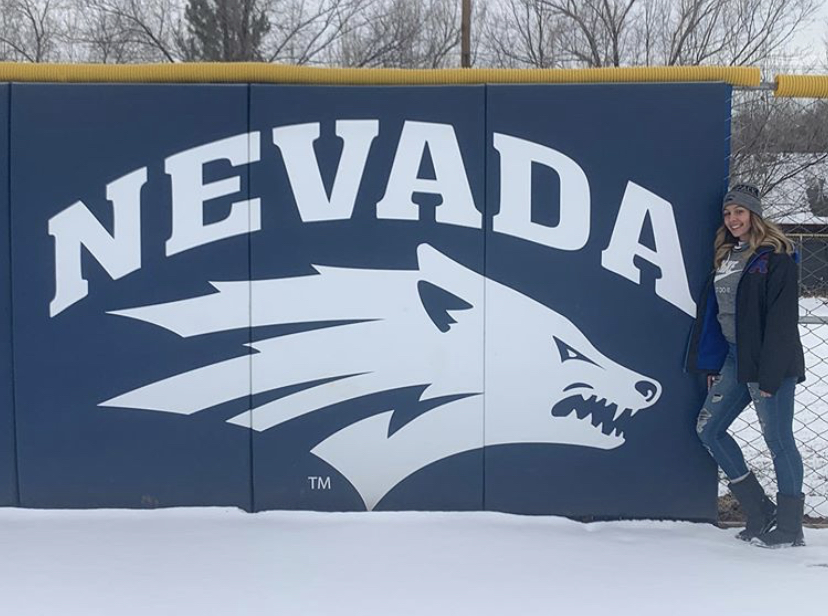 Ellie Visits the University of Nevada. Ellie Garcia stands in front of the centerfield logo of the softball field.

Ellie Garcia, a junior at Don Lugo High School, is an athlete who has been nothing short of great in only her third year of high school. A two-sport athlete who plays both softball and volleyball, changes the game with her size and is a key player for both teams.

After her third year of volleyball she was able to acquire SoCal student athlete of the week, and Mt. Baldy League MVP. However, she fell short in the CIF playoffs with her team in the second round. With one season left of volleyball, and two seasons left of softball, Ellie still has enough time to continue racking up the accolades. The Lady Q’s have gone to the CIF playoffs the past two years and also had Ellie Garcia on the team for those two years since she was a freshman.

On November 30, 2019, she announced that she had committed to the University of Nevada. Although she is a standout player for both sports, she chose to continue playing softball over volleyball. The reason for her decision as she states, is, ”I chose to play softball over volleyball because softball is what I really love to do.” “I’ve been playing since I was little and I love everything about the game.” Along with getting the gracious offer from Nevada University, Ellie also has accepted a full-ride to play softball in Nevada.

Her passion for softball is undeniable. She expresses that, ”I want to be successful because my parents were successful in sports and they have done a lot to get me to where I’m at today,” she continues, “Their success sets the bar for me and to be better than they were. Not only is that my goal, but it’s their goal as parents too.”

Throughout her career in both sports she has received many doubters lurking and waiting for her downfall. This helps add fuel to her fire and makes her want to do better. Ellie states, “A lot of people told me I would never be successful, and a lot of people doubt me and I just want to prove them all wrong.”

Her first impression of the school was welcoming, she was greeted by the mesmerizing sight of the snow, the grand softball stadium, with the roaring football stadium. She was starstruck as she walked onto the campus and the aesthetic wasn’t all she was in love with. Ellie explained with passion, ”I could tell Nevada is all about their sports programs. I love Coach Taylor and his vibe, and the pitching coach, Coach B, and her vibe. I was shy but they made me feel at home right away.” Ellie has a bright future going to Nevada, but has more time to improve and perfect her craft before she enters Nevada as a freshman.