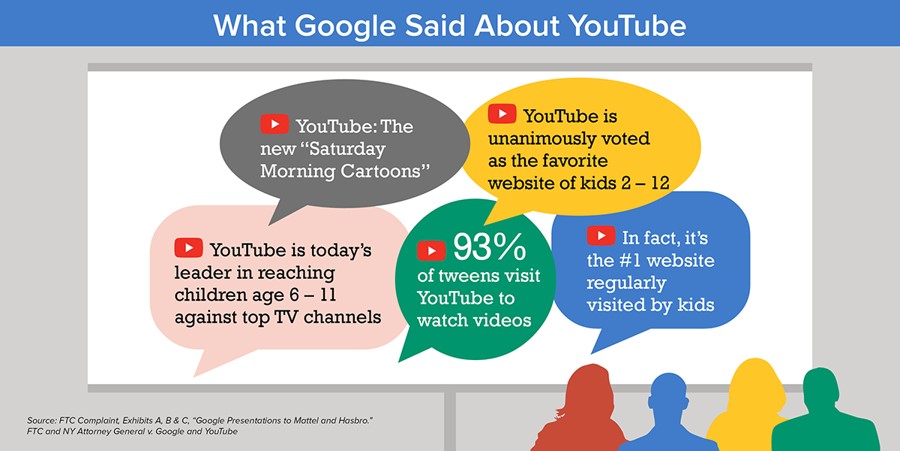 Statistics outlined by the FTC (Federal Trade Commission). Courtesy of the FTC.

YouTube as it is currently known is being squeezed into a small niche. In 2018, Google and YouTube were fined by the FTC for their alleged violation of COPPA, otherwise known as the Child’s Online Privacy Protection Act by allegedly collecting the information of children 12 and under. COPPA passed in 1998, and took effect in the year 2000, designed to prevent websites and large computer corporations from collecting and manipulating the data of children, as well as to give them privacy until the age of 13.

Recently however, the definitions of what can and cannot be seen as “for kids” has become more broad, having evolved since the internet was a relatively new concept to most people back in the late nineties. It is very evident that today’s parents are fond of Youtube, and it is also highly enjoyed by children under the age of 13. According to the Pew Research Center, “81% of all parents with children age 11 or younger say they ever let their child watch videos on YouTube. And 34% of parents say their child watches content on YouTube regularly. It should be noted that YouTube explicitly states that the platform is not intended for children younger than 13 and that the site provides a YouTube Kids option for children that has enhanced parental controls.”

Because of parents’ neglect for the YouTube Kids app, an app designed for children, the FTC is now forcing Google and YouTube to comply with the FTC, even though for years YouTube has complied with the FTC and COPPA. YouTube now must have regular content uploaders specifically state in their videos, and the audience tab, that the video is either made for adults or is made for children. If the video is specifically made for children, they are most likely to be hit the hardest.

Flagged videos will not include ads (estimated to be 90% of all revenue a YouTuber can make), will not appear in recommendations, and subscribers can no longer receive notifications for channel updates, new videos, and changes to the channel itself. With this, YouTubers are being squeezed from all sides: they cannot be too adult or else they will be demonetized, and now they can’t be too child-friendly. Failure to comply with these new guidelines, could lead each video to a fine of up to $40,000. These life-changing fines will destroy many of the child content creators on YouTube, while media influencers, who are twice as likely to be monetized will remain untouched by this.

Ever since November, YouTubers across the platform have been faced with the arbitrary imposition of either being demonetized or faced with a potential fine of $40,000. YouTuber and Content Creator, Diesel Patches, remarked on the urgency of the situation, “I believe the COPPA ruling is unfair and destructive against content creators as a whole, especially those who create child-friendly content. If COPPA wants to be more effective, then the FTC should at least update their policies in order to be less broad.”