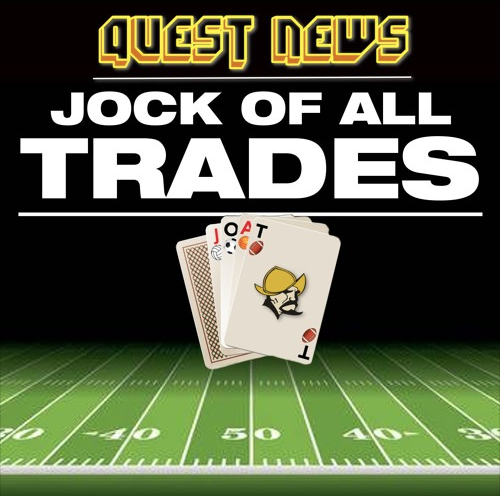 Visit Quest News on Sound Cloud to hear our podcast show, "Jock of All Trades" hosted by Diego Cruz and Gary Carcia.

Did you miss what happened this week in sports on campus? Join Diego Cruz and Gary Garcia, Quest New’s Sports Editor and number one Sports Writer, as they sit down and stack the deck (summarize) for every sports game that happened Monday through Wednesday and as they make their predictions for the upcoming games on Thursday and Friday. Sit down and listen this week as they summarize the devastating season for Girl’s Water Polo thus far, Tre Jacobs make a break through in Boy’s Basketball’s pre-season, and the upcoming wrestling tournament this weekend.

Gary elaborates on the slow start for the Girl’s Water Polo team as they have had a 1-3 losing season thus far. With all the seniors from last year gone, the team looks to rebuild their team with all new up and coming players. Almost all areas of sports go through this transitional period, but building that gratitude and brotherhood (in this case sisterhood) is a way to have passion for the game in each player as they have this love and bond for one another and the game itself.

Moving onto the pre-season for Boy’s Basketball, Junior Varsity player and “Jock of All Trades” very own host Diego Cruz talks the struggles on the court this year and the breakout, transfer star of Tre Jacobs. With an average of 10.7 each game, Jacobs overtakes the previous season’s highest scorer of Dylan Manos.

To wrap up the episode, Gary and Diego go in detail about the games of Girl’s soccer. With this week’s games both being played in the rain, the Don Lugo Girl’s Soccer team came out in victories in the games against Summit High and Jurupa Valley.

So, whether you want the lowdown on all things Don Lugo sports or you want to hear ALL IN interviews with Don Lugo’s star athletes; Quest News’ Sports Podcasting shows, Jock of All Trades – The Deal with hosts Diego Cruz and Gary Garcia every Thursday on Soundcloud and iTunes!