The stigma behind pursuing art 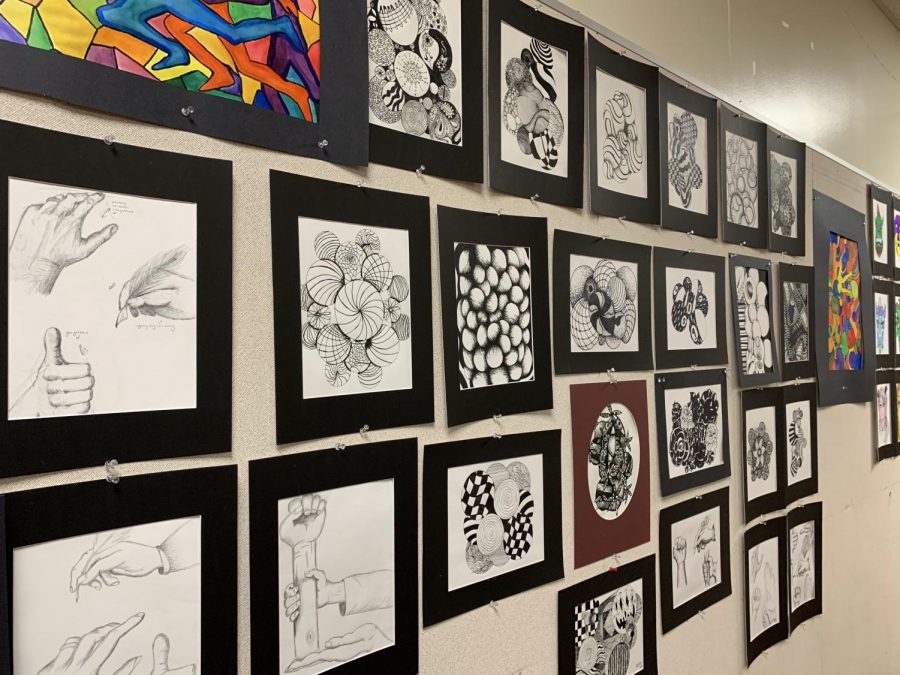 The wall of art pieces made by Ms. Lee's advanced art students during their first semester. Showing that the beauty of art is unparalleled and truly important.

Pursuing the arts as a career choice has always held a stigma against it by those who believe it isn’t a viable source of income, but this isn’t true. Students with a passion for the arts and the hopes of pursuing it in college are constantly being put down by those around them, even parents. Students from Don Lugo aren’t exempt from this stigma either.

In an article in The Odyssey, Hannah Luterek urges those who discourage a career in the arts and tell art lovers to instead go for a more “lucrative” career choice, to stop. She further explains that, “There is absolutely nothing wrong with these careers; if you have the necessary skills, then go for it, but why must artists be shamed for their choice to pursue and better their craft?”  Luterek promises the energy is better spent on being supportive.

The fear of being broke, difficulty finding jobs, and being a competitive businessperson are what worry many parents of prospective artists. In an article in Psychology Today, Marty Nemko argues, “Typical wannabe artistes that graduated from a low-name arts college…are very unlikely to make enough from their creative output to earn even a modest living throughout the decades of their working life.”

However, how do the students behind the passion for art feel about all of the stigma, and have they experienced it themselves? Advanced theater student Andreia Sales, an aspiring actor who has been acting since her Freshman year, has only been met with support and acceptance from her family and friends. She plans on majoring in musical theater or just drama in general and when asked if anyone has ever been discouraged she responded, “Not really, everyone has been really supportive of me and that really helps a lot knowing I have their full support.”

Even though she receives support she is still worried for the future, “I am definitely worried for the future because unfortunately, this career that I’m planning to pursue is one of the hardest careers there is to get into.” Although she is worried, she still has confidence in her ability to act and perform but states that she knows that she has to work more for what she needs to do.

Freshman student Juliette Woolery is open to pursuing art from things from singing to performing on a stage and even practices drawing and painting. When asked if she had received discouragement, her response was different than Andreia’s. She verbalized that she had indeed received discouragement, “Unfortunately I have been discouraged by my own family, but that will not stop me from trying.” She recalls them telling her that it’s a hard thing to get into, along with it being financially difficult and it possibly taking a toll on her mental and emotional being. Although being told all of these discouraging things, Juliet still plans on not giving up on her passion for the arts and even has a backup plan just in case it doesn’t work out.

Aspiring photographer and photographer for Quest News, Saslaya Baca, has also experienced her fair share of adult discouragement about her pursuit for photography. She plans on majoring in photography and possibly minor in dance or business. Although the idea for a minor in business is not her own, she explained that her dad said to make sure she had a back up plan.

Saslaya reported that she’s been told it will be difficult to be financially stable and how the competition is fierce with other talented people out there. It isn’t all discouragement though, Saslaya disclosed that her mother gives her the most support, along with her theater teacher Mrs.Deming, who sends Saslaya different art colleges and sends out letters to said colleges about Saslaya’s skills. She also explained how she is indeed worried for the future, she worries she will get a job she isn’t passionate about and doesn’t see value of life in a cubicle.

Saslaya shares her artistic talents through social media sources like Twitter and Instagram. She is involved with drawing which she has been doing since the 7th grade, dance since the eighth grade, and photography since she was in the fifth grade. She explained with fondness,”I had like those tiny cameras, and I would take them everywhere.”

The most common worry among aspiring artists and their loved ones is money. A study performed by the SNAAP which surveyed art program graduates and their success on working in the field, reported that 70% of the graduates are working within the arts, 75% continue art outside of their careers, and have been self-employed at some point. In an article in The Medium by Jeff Golins explains the study further that the fear of being poor is unwarranted and that, “They report income levels that support families, sustain careers, and enable charitable giving. In other words, they are not starving.”

In the end the point is, prove you and your family’s fears about art wrong. Do what you love and are passionate about, don’t let years of stigma and criticism from society kill your hopes and dreams for the future.