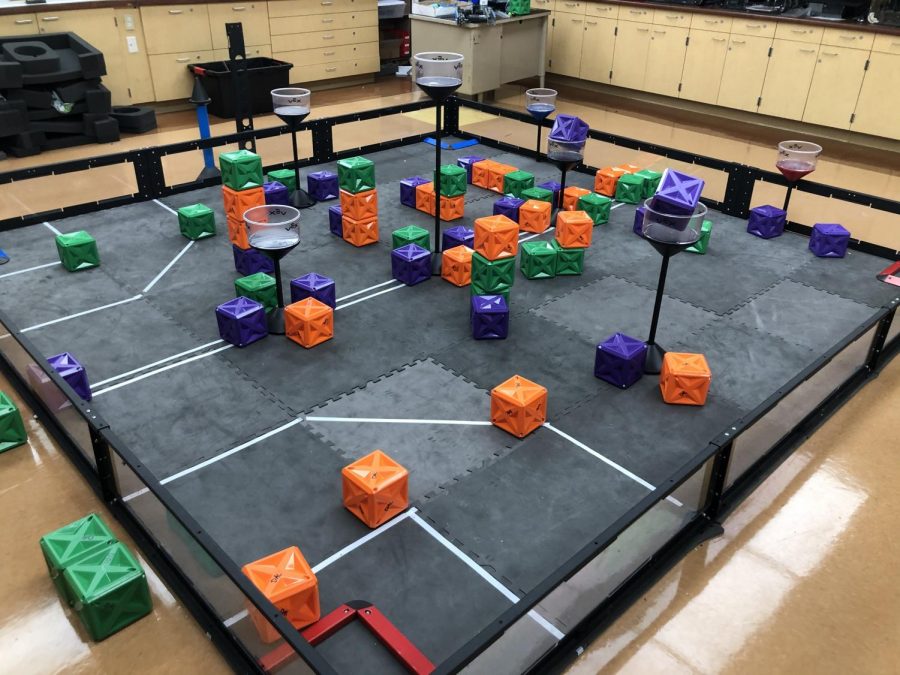 The Robotics Team's practice room where they let their robots roam free in the course while they practice for their tournaments. Photo courtesy of Saslaya Baca.

On November 16, the robotics club went to Mt Sac for a tournament and left the competition being the tournament champions. This club is unique because it consists of multiple teams that are put together by the students. The advisor, Mr. Engstrom, acts like a mentor and guides the students to the right direction.

The club members are the ones that design, program, and build the robot. To be apart of the team, you have to be extremely committed, because the time you start competing is based on how fast you build and how well your robot works. All the teams come on Fridays afters school for two hours and at least once or twice a week after school and meet up outside of school.

The classroom has an extra room for the filed the robots use. It is set up exactly like the ones at the tournaments so they can practice like if they were there. This is helpful for the teams because after Engstrom watches how the robot is moving, then he gives feedback and tells them what needs to be changed so the robot could be the best version it could possibly be.

The High Calibor team, which is the one that competes the most, work on their robots nearly everyday and they come after school 4-5 times a week. Once the entire team and the bots are ready, the advisor looks for local tournaments which range from 16- 40 teens and they get to choose where they would like to compete.

Once they are at the competition there have to pass inspection which includes checking the amount of motors they have, checking their equipment and censors and, placing their robot in an 18x18x18 inch box to make sure it fits, and then after their bot can expand. After the team passes inspection, they get paired up randomly with another team and they go through the   40-50 matches of the qualifying rounds together.

Then the teams get ranked from those matches and the go into the next set of rounds which are the playoffs and you get to choose your team partner. In these matches, the game is to have your robots stack cubes, and different shapes like a pyramid get extra points, while one team is building, the other group goes out to distract the other teams.

Every year around April, the competitions announce the game for the year and all tournaments play this same game. Engstrom explained how one year the game was to have your robot throw balls out and to hit the target which was a flag. Each team had their color and when u hit the flag and it rotated to your teams assigned color, then you got a point.