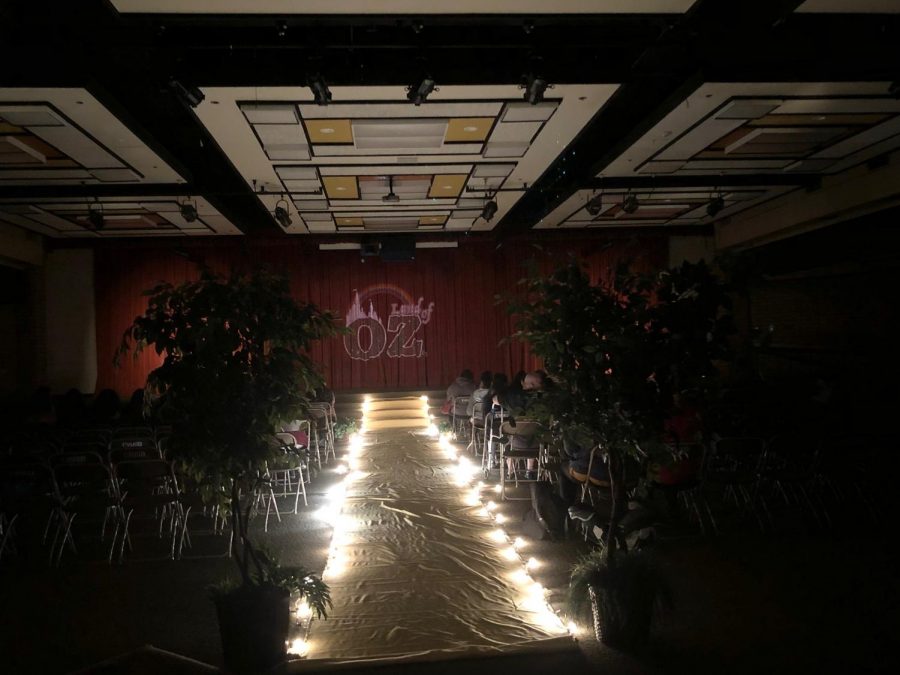 Saslaya Baca, Crew Captain, shares how crucial her job is in creating a smooth show. "When the scenes change and the curtains close i'm changing props making sure everything goes smoothly."

People began to flood into the MPR, walking down a “yellow brick road” lined with lights and trees. Play-goers were ushered to their seats by theater crew members dressed in all black, and the actors were backstage calming their nerves through their traditional “energy circle” and “great shake out”. The curtains projected “Oz” on the closed curtains, the lights dimmed, and Director Mrs. Deming’s voice fills the MPR, wishing everyone a great show. The second night of their fall play, Oz by Don Zolidis, was about to begin.

They’ve been preparing for the show since September and, according to Aiden Deming who played The Scarecrow, spent over 80 hours creating an outstanding show consistent with the Drama Department’s vision. Mrs. Deming shared the amount of detail that went into the show, such as how they specifically placed a red item in each scene to commemorate The Wizard of Oz on their 80th anniversary.  Andreia Sales, thespian president and lead role of Beth, shares her confidence with their abilities the morning before they preformed, “We’ve been a lot more prepared than we have been in previous years, which has given us a really good feeling about this show.” And once the curtains are drawn, there was no doubt that this confidence was well-placed.

Center stage lies a casket, surrounded by weeping people wearing all black. Beth stands left of the casket, holding a Wizard of Oz children book in her arms. Later on it’s revealed that it was Beth’s younger sister, Jill, that died in a car Beth had been driving. And just like that, without uttering a single word, arms were covered in goose bumps and the crowd’s eyes are glued to the stage.

After leaving the funeral, Beth is swept away on a magical adventure to the world of Oz by The Guide (Mya Salazar). On this adventure she meets The Cowardly Lion (Olivia Ellis), The Scarecrow (Aiden Deming), The Tin Man (Edward Lillie), The Wicked Witch of the West (Yasmin Rodriguez) and many other classic as well as new Wizard of Oz characters. The show was filled with clever jokes –some amazing crowd pleasers about The Board of Education and The University of Phoenix– and some classic slapstick comedy that had the crowd laughing out loud.

However, the show wasn’t loved simply because of the hilarious comedic relief, but rather for the underlying message revealed by the Wizard (Lucas Ballard) at the very end. The journey Beth went on was the journey to accepting her sister’s death. The Wicked Witch embodied Beth’s anger at the unfairness of Jill’s death. The Cowardly Lion symbolized Beth’s fear, and how her sister’s untimely death could make her fear the world around her. The Scarecrow represented how someone may want to remain ignorant to their emotions after losing someone, rather than confronting those feelings head on. The Tin Man symbolized how Beth may have wanted to feel nothing at all, and become numb rather than allowing herself to feel grief.

Andreia Sales did such an amazing job delivering Beth’s final monologue, to the point where audience members were whipping away their tears and holding their breaths as she spoke each word passionately. The production of the play was impressive, as Mrs. Deming added around 49 light cues and even created a tornado to help the audience forget they were watching a play, and timed each affect to perfection. Overall, the Drama Department did an outstanding job with their production of Oz, and should be extremely proud of themselves.