Students gravitate to technology as a way of cheating 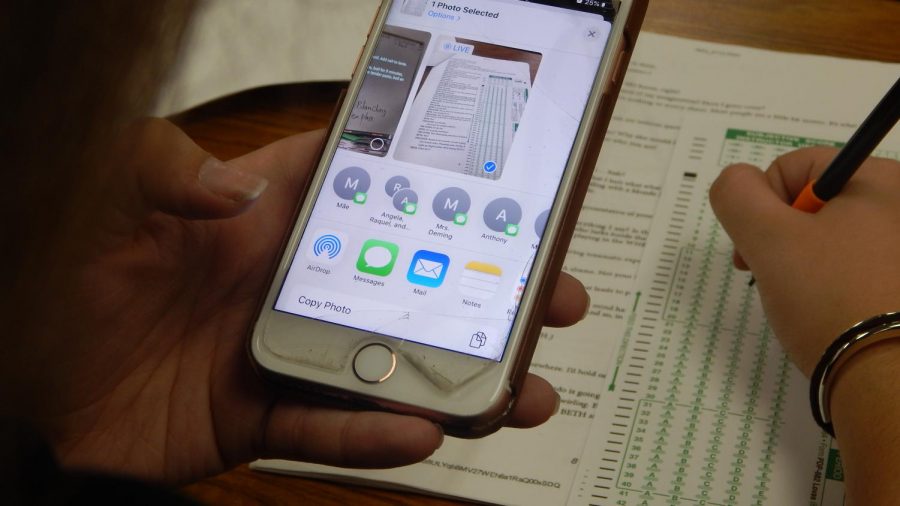 Cheating in the hands of students begins with a cell phone. Don Lugo Senior, Andreia Sales, looks at her phones' Air Dropping capabilities at the beginning of a test. Air Dropping can be an anonymous act among students. "Kids will search worksheet titles or questions and they'll find the whole worksheet with answers online and then Air Drop what they've found," admitted one anonymous student.

Students have joked, “If you’re not cheating, you’re not trying hard enough.” And although students may laugh off the comment in a nonchalant way, the reality is…they’re not kidding. Cheating is a common phenomenon among high schoolers and continues to grow at an alarming rate.  According to the Center for Youth Ethics at the Josephson Institute in Los Angeles, “A whopping 64 percent of high school students cheated on a test at least once in the past year…while thirty-eight percent said they had cheated two or more times, and another 36 percent said they had used the Internet to plagiarize an assignment.”  Cheating is on the rise. As of 2008, the US News reported that, “students who engage in dishonest acts still hold a positive view of themselves.” Fast forward to 2019, and now you’re looking at a slew of applications and websites that give students even more ways to cheat. Students are fooling themselves if they think any form of justification for cheating is acceptable, in fact, students who can’t hold themselves responsible for their unethical behavior will most likely create a generation of copycats and plagiarizers who constantly turn to the Internet to bail them out every time academic work gets hard.

Don Lugo High School is no exception.  The group of students that once used archaic and traditional methods of cheating like secret notecards and writing answers on arms or under skirts, have now turned to phone applications such as Mathway, Photomath, Brainly, and Study.com, just to name a few. Oh, but cheating on campus with technology hasn’t stopped there. Besides asking Siri to provide students with the answers, students are well versed in creating group chats on their phones where they share documents, notes, and pictures of tests. The information being shared is easily done through text messaging or through more sophisticated means like airdropping.

One Don Lugo sophomore explained, “When I was about to start a science exam, I got a notification on my phone. I got pictures of the answer key for the exam air dropped to my phone. I didn’t use the answers, but I felt a relief that I had an out if I was desperate enough… I didn’t know who sent it, but I was grateful since I’m not one of the smart kids and I wasn’t doing well in the class, but I would have felt too guilty about cheating.”

Out of desperation, students are putting themselves at risk for the consequences that can come from cheating, although most cheating is handled by each individual teacher on campus. According to the Chino Valley Unified School District Parent and Student Handbook:

Which means, teachers have the right and support from the district to have students turn off phones and confiscate a phone for any of the above reasons. The problem is, not all teachers feel it’s necessary to start taking phones away or banning them from their classroom. Technology, in an educational setting, has a place in the classroom if it’s in the right hands, and there are plenty of teachers on campus who see technology as a useful tool.

AP Economics teacher Mr. Highstreet said, “Because of cell phones, the world is at students fingertips. Why wouldn’t I use that as a tool? I think it comes down to assessment. Teachers have to word questions in a way that gets to the heart of the skill or content the student needs to know. If I was asking basic questions that were easy to look up or multiple choice questions, then I’m knowingly putting myself at risk for kids to cheat.”

AP English 11 teacher, Mrs. Lord explained, “I think as educators we have an obligation to teach students to use technology ethically and responsibly. Students have always been ingenious and had found ways to cheat before it’s advent. I don’t think we ban technology…we have to change the intrinsic motivation and systematic habits that lead [students] to feel that this is their only option.”

Teachers on campus can no longer turn a blind eye to the rising technological wonders of the cell phone by not knowing all the methods by which students cheat.  Both, students and teachers, should be well aware of not just the opportunities students have, but also the reasons why the temptation to cheat may lead them down the proverbial path. The reason why we use the idiom phrase, “cheaters never prosper” is because we know that those who turn to a means of cheating to gain knowledge will eventually have to face the consequences of their actions. Whether its ignorance or desperation, no matter how much technological power you have, cheating is academically unethical, and the attitude that “it’s no big deal” is an even bigger predictor that cheating is a moral issue. In the future, if students want to face an entire day of no cell phones at school, they might want to reconsider how easy it is to use them before they end up not being able to have them at all.