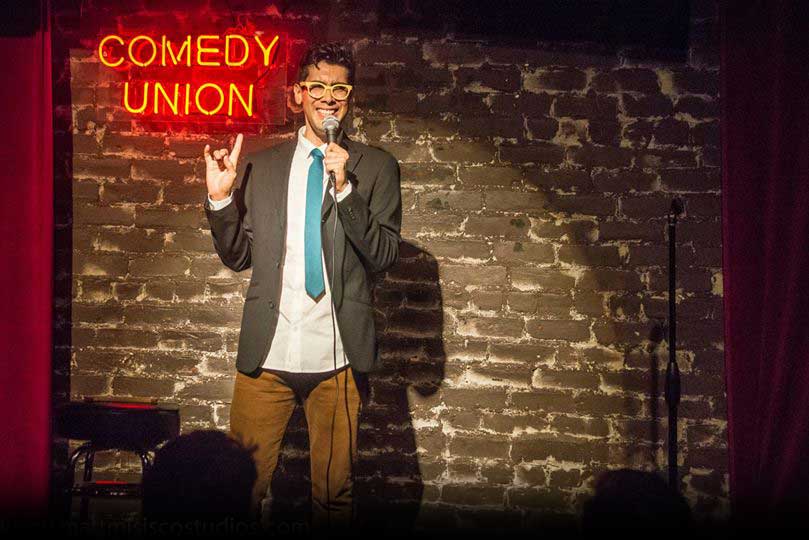 Los Angeles-based comedian Matthew “Mattio” Martinez has been performing stand-up comedy for 6 years. Martinez has been married for 16 years now. Martinez begins his set by “laying down some ground rules,” such as “I tell a joke, the audience laughs.” From the very beginning of his set, it’s clear that it is going to be a good show.

Matthew is his first name; however, his friends call him by Mattio, so he has been using that as his stand-up name. He is a part of the LGBTQ+ Community and shares this with the audience. Throughout the show, Martinez also shares some of the struggles that he faced such as his parents not accepting his sexuality right away.

By sharing this with the audience, it allows there to be a connection between performer and each audience member- they are able to relate to one another.
“Telling my story through jokes helps the audience relate to me.”
Before becoming a comedian, Martinez has written and directed his own independent films for several companies. He has also worked on some comedic Disney short films. This was the first step to becoming a stand-up comedian.

Throughout the set, Martinez is very interactive with the audience. He asks them questions that will relate to the following topic. By doing this, he explains, it will help him establish a connection with the audience, and (jokingly) not offend anybody.

For example, while talking about the struggles of being gay, he mentions some places where gays are not necessarily welcomed, a.k.a. Texas. There is a young lady in the audience and when she replies that she is that is from Texas, Martinez automatically responds, “Oh my gosh, guys! Protect me from her! Protect me from her after the show!”

Being a stand-up comedian is not easy. Martinez informs the audience that it takes around 3 hours to write only 10 minutes of a set… And he has written a total of 14 sets…

Also, being a comedian who is a member of the LGBTQ+ Community has its struggles. Martinez shares how when he first came out to his parents, they did not take it very well. “They didn’t look at me for about for weeks.” But then, they accepted him for who he is.

Mattio Martinez is a wonderful comedian because he is so relatable. Even though his set was only 10 minutes, it was the best 10 minutes of my whole day. And if you would like to see one of his shows, visit his website http://mrmattio.com/