Day to day in the Lip Sync Battle Hell Week 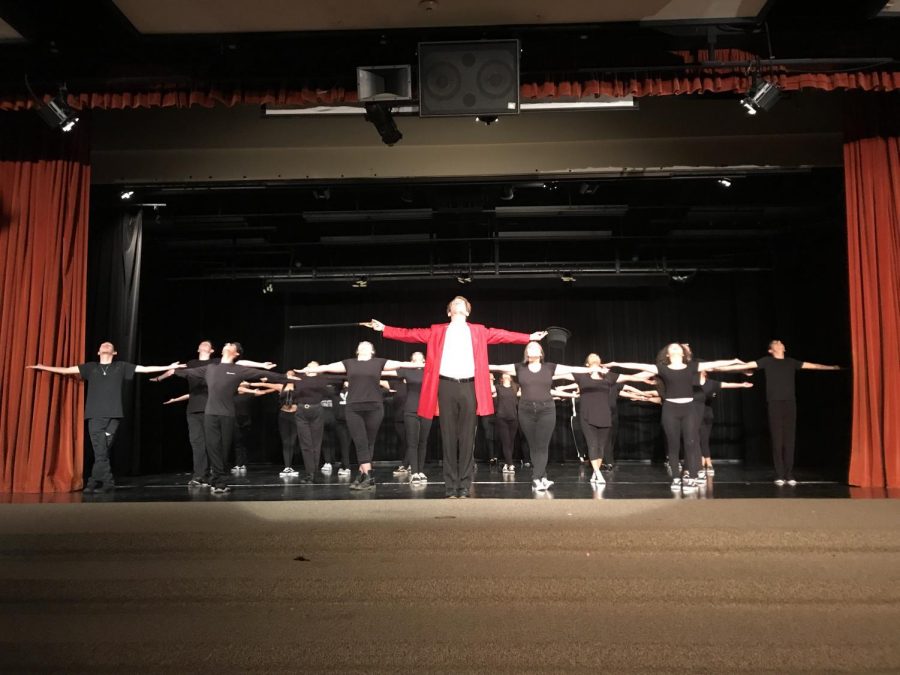 Theater students typically spend a month or two preparing for a production, which culminates in Hell Week, the week leading up to opening night. What many people outside of theater don’t understand is how important this week is. “Hell Week” is full of worry, excitement, nervousness, and fun, but in the end, the show always turns out amazing. Follow along for my day-to-day run through of this crazy Hell Week.

Before we begin our rehearsal, at 3:00, Mrs. Deming gives all of the performers a quick explanation of how Hell Week works. She begins by saying how glad she is that everyone, especially the newbies, made it as far as Hell Week. So she reviews all of the rules and then says how long rehearsals will run. Generally, rehearsals go from 3:00 to whenever Mrs. Deming says we are good to go for the night, but no later than 9:00. We start off with a review of our opening number. We have to go over it a few times because we just finished learning the dance on Saturday. About an hour later, we start working on the routine to our closing number for about 20 minutes. We take a 10 minute break and all of the performers are sitting around, having a snack, or rehearsing their routines. Now, it is time to present everyone’s routine to Mrs. Deming. This is the first time we have seen each other’s performances so I’m kind of excited to see the other team’s choreography. I can already tell that there is going to be some serious competition between the 4 teams this year. In the Lip Sync Battle, there are 4 teams, 2 Intro to Theatre teams and 2 Advanced Drama teams. Before this week, each team has had around a month to choose songs according to the categories, make appropriate cuts that fit our time limit of 2 minutes,  AND choreograph. Rehearsal is coming to an end so Mrs. Deming calls rehearsal at 8:00. This is going to be a good show.

Tech rehearsal is quite possibly the MOST stressful day of Hell Week. Obviously, it focuses more on the technical parts of the show. The first 3 hours of this rehearsal are dedicated to our opening number which most likely holds the most light cues. While this is happening, performers are relaxing, eating a late lunch, rehearsing their routines, and some are even trying to squeeze in some homework. Mrs. Deming has finished recording all light cues, so she calls all performers to the stage to get ready for the top of the opening number to run with lights, music, AND choreography. (Quick reminder: there are around 30 performers needed on stage.) Since it’s the first time performing the whole opener put together, we have to run it a couple of times to get it just right. Finally, we have the perfect opening number. Now it’s time to set up the light cues for every song in every category for every team. This is getting really boring because everyone except one team is just chilling in the Black Box, the theatre room. My friend Alexis Lozoya is new to the Lip Sync Battle because she auditioned to join (obviously). So I’m talking to her in between dances and just asking her how she has enjoyed this experience.
“Honestly, it’s been really cool. Because in, like, cheer, we don’t have a ‘Hell Week’ per say, we just have really long rehearsals. So it’s cool to see what it takes to put on a show here.”  -Alexis Lozoya, Class of 2020
It’s pretty late so Mrs. Deming calls rehearsal at 9:00. Today was a tiring day, but it’s all going to be worth it soon.

Here we are, the day before opening night. Before we start our run through the show, a couple of teams need to finish recording their light cues with Mrs. Deming, which takes up the first hour and a half of our rehearsal time. While that happens, the other teams are rehearsing their choreography. All of the light cues are recorded so Mrs. Deming has a talk with us on how the show is going to work and what the rules of the Black Box are. Now, everyone is getting dressed for the opening number. Right now, Mrs. Deming is working with Eddie Lillie, the host of the show, on how to explain the show to the audience. 20 minutes later, backstage is getting crazy, because all four teams are squished in here waiting patiently to hear who is going against who for the first round. My team’s first song was from “Deming’s Playlist” and I am already tired, definitely a fun performance. Round 1 is over and now all team captains have to go back to the stage to reveal the next category. Halfway through the show, Mrs. Deming changes the rules. Instead of 2 teams performing for 2 categories in each round, all 4 teams perform one category for one round. This means it’s going to be an even tighter competition. An hour goes by and now we are setting up for our closing number. This closing is so emotional because it’s basically a send off to our Seniors.

I walk in at 5:00, our call time, and I am already being given a task. I have to find out which flashlights work, which need to have batteries replaced, and which just don’t work anymore. 10 minutes later, I finish the flashlights so now I am off to bring Mrs. Deming the cash box from her office. After about 20 minutes, I am dressed and ready for the opening of the show, waiting around for the doors to open with everyone else. Doors are now open and most of us are waiting in the Black Box. It’s 10 minutes before the show starts and it’s time for the performers to hold hands and send good energy in a circle, which I personally like to call the “Energy Circle.” This is a cool tradition because it allows us to forget all stress that this week has brought us and focus on putting on an amazing performance for each audience. After the Energy Circle, we all break out into a Shake Out where we shake each hand and foot counting from 10 all the way down to one. It’s currently 5 minutes until the show opens and everyone is so hype! Opening number is finished and now we are all waiting to hear what the first category is. 10 minutes go by and Round 1 is done and these performers are so rowdy and ready to keep getting on that stage. Seeing how excited everyone is getting about performing their songs is making me so proud and happy because their excitement is what drives this performance and makes it amazing. It is now intermission at 8:05, intermission lasts only 15 minutes, and everyone is just waiting around, eating quick snacks, or rehearsing their choreography. The last team is performing and that means it is time to start setting up for the closing number.
“I feel kind of sad because this is my last Lip Sync Battle and I’m going to miss performing like this with everyone and trying new things with a different team each year.”              -Dahlia Huezo, Class of 2019
The Lip Sync Battle is finished and it was so amazing! Dahlia’s team came out in 1st place on Thursday, Natalie’s team on Friday, and Mya’s team on Saturday, but everyone did so amazing! All of the hard work and stress that went into this week definitely paid off. I couldn’t be prouder of the whole cast.